How Do We Remember Victims of Mass Murder? A Holocaust Survivor's Daughter on How She Honors Her Family

How to remember victims of mass murder who have no graves? For families whose members have survived genocide or other forms of mass murder, remembrance is private and visceral. They often have no body to bury or cremate. As a child, I was fascinated by funerary objects: Egyptian mummies and their grave gods, memorial candles in temples, churches, and home shrines, old tombstones in small-town American cemeteries.

No one in my immediate family has a tombstone, though several generations of my ancestors do in what is now the Czech Republic. During the Second World War, my father’s family was gassed to death in Auschwitz and my mother’s parents were shot into an open pit at a small extermination site in what is now Belarus. My parents survived the Nazi concentration camps and died of natural causes. Perhaps in solidarity with their families, they chose to be cremated and asked their children to scatter their ashes in nature. We did so.

But I was always troubled by the absence of graves for so many of my murdered family members. The Hebrew injunction to remember – zachor – is repeated nearly 200 times in the Hebrew Bible. The name of the Holocaust memorial in Jerusalem, Yad Vashem, comes from a verse in Isaiah (56:5) that reads, “Even unto them will I give in mine house and within my walls a place and a name.”

The names of my family members, along with 77, 290 others, are painted on the walls of one of the oldest synagogues in Prague. I’ve written about their lives in several books yet I wished for a more concrete memorial that would ground their names in the place where they lived full lives. Then I read about the artist Gunter Demnig’s stolpersteine, German for “stumbling stones.”

Gunter Demnig was born a few weeks before me in the fall of 1947. His father served in the German Luftwaffe while mine, a lieutenant in the Czechoslovak Army, became a Jewish prisoner of the Nazis after the German occupation.

In 1990, Demnig had marked the 50th anniversary of the deportation of Sinti and Roma people in Cologne by tracing their route through the city with white house paint. After a local resident argued that no “gypsies” had ever lived in her neighborhood, he marked the route in brass. That eventually led to his idea of inserting brass-plated cobblestones into sidewalks in front of buildings where not only gypsies but Jews, anti-Nazis, homosexuals, Communists, Mormons, Jehovah’s witnesses, criminals, mentally or physically challenged people – all deported from Germany by the Nazis – had once lived. A hand-engraved text followed a uniform formula: “Here lived: name of victim, date of birth, date of deportation and destination, and the word ‘murdered’ or ‘survived.'”

Demnig’s project caught the attention of surviving families, historical societies and local civic organizations across Germany and elsewhere. The Munich city council banned stolpersteine in 2004 after the Jewish community there expressed consternation about a sidewalk memorial that could be stepped on or worse. Though more than 100,000 people signed a petition supporting the project, the ban was upheld in 2015 and an alternative installed. But despite such setbacks, Demnig has now installed over 75,000 stolpersteine in 1,200 cities and towns across Europe.

You can’t plan a museum visit or stand in line for a ticket to encounter the largest decentralized memorial in the world; you stumble upon the stones. They are meant to surprise, provoke, and trigger reflection. When someone stumbles in Germany, a folk saying has it that “a Jew must be buried here,” raising the idea of an invisible history. A statue or plaque usually invites you to look up; stolpersteine force you to bend over in order to read. They also marked the place a person lived a life – not where it was cut off.

Under the Nazi occupation and subsequent Communist regimes in Central and Eastern Europe, Jewish headstones were dug up and stolen from cemeteries, then used as building material, sometimes face-down, as cobblestones in pedestrian zones. The desecration was intentional; the stolpersteine both reference and reverse this practice.

Demnig’s project can be viewed as a contemporary take on an ancient cross cultural tradition. The stumbling stones are smaller than most stelae (a uniform four-inch by four-inch) and deliver a modest as well as democratic form of commemoration. Men, women and children – both famous and obscure – get the same size. Local authorities determine when the stones may be installed and families decide if they would like to have a ceremony and what kind.

I contacted the facilitators in Prague about installing three stones: one for my mother Franci, and the other two for her parents Emil and Josefa Rabinek. All three were secular Jews who chose again and again to identify as Czechs and did not change their Czech surname of “little Rabbi.” They chose Czech rather than Austrian citizenship when the Czechoslovak Republic was established in 1918, proud to be living in the most democratic nation in Central Europe. Emil was an electrical engineer and partner in the firm Koralek & Rabinek; Josefa owned a fashion business called Salon Weigert, at 53 Spalena, on the corner of the bustling main avenue Narodni Trida. My mother Franci, born two years after Czechoslovakia was founded, took their equal rights for granted.

All three Rabineks believed that Czechoslovakia’s strong military would repel Nazi Germany. They chose to remain in Prague while others emigrated. After the West’s betrayal at Munich in 1938, it was too late for them to get out. Four years later they were deported to Terezin after ever more stringent anti-Jewish racial laws. Emil and Josefa were murdered soon after; Franci made her way through a series of camps.

In 1945, after recovering from typhus, she returned to Prague alone. She re-established her mother’s fashion salon, married, had her first child (me). We lived at the foot of Wenceslas Square, not far from the building where she grew up. My parents pushed my carriage down Narodni Trida toward the river where she had played when she was a child. She never wanted to leave Prague again. It was home. Even after the Communist putsch of 1948, when armed militias marched beneath their windows, my father found it difficult to persuade her to emigrate.

I now live in Lexington, Massachusetts where people take pride in local history but few have ever met a Native American or wondered what the name Massachusetts means in the language of people who not so long ago lived where we do now. Similarly, there are many Czechs who have never met a Jew and do not know that Jews lived and worked in 53 Spalena. They may stumble over the stones for the three Rabineks, and wonder who they were. Like the students and tourists who stopped to watch and ask questions as the stolpersteine were installed last summer, they become witnesses to a small act of ingenious commemoration.

A map of stolpersteine in Prague can be found here. 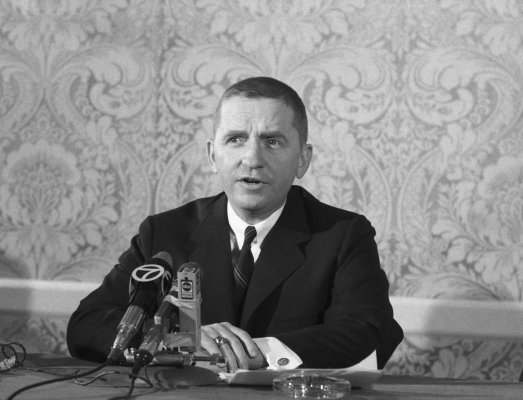 Ross Perot's Forgotten Mission During the Vietnam War
Next Up: Editor's Pick