Beyond Tulsa: The Historic Legacies and Overlooked Stories of America’s ‘Black Wall Streets’

By Video by Arpita Aneja and Olivia B. Waxman

Between May 31 and June 1, 1921, as many as 300 people were killed in one of the deadliest race massacres in U.S. history. Riled up by rumors of a Black man raping a young white woman, a white mob burned down the Tulsa, Okla., neighborhood of Greenwood—a.k.a. “Black Wall Street,” the affluent commercial and residential neighborhood founded in the city by Black Americans who went west after the Civil War.

Now, 100 years after the 1921 Tulsa race massacre, awareness of this American tragedy has grown thanks to the work of activists and descendants of victims, local political support, and depictions in the HBO series Watchman and Lovecraft Country. But Tulsa’s was not the only Black Wall Street. The history of other such districts nationwide is still not widely known beyond their home cities, though they were many: Bronzeville in Chicago; Hayti in Durham, N.C.; Sweet Auburn in Atlanta; West Ninth Street in Little Rock, Ark.; and Farish Street in Jackson, Miss.

Educators and historians say that students in the U.S. are much more likely to learn about Black Americans being enslaved and living in impoverished neighborhoods and not enough about centers of Black wealth and success. Learning about that history too—and the circumstances that undermined Black businesses during these neighborhoods’ heydays—is key to understanding the obstacles that face many BIPOC people today.

The above video explores the history of Jackson Ward in Richmond, Va., which is considered the first Black Wall Street to emerge around the turn of the 20th century.

The Rise and Fall of Richmond’s Jackson Ward

Designed to help safeguard Black Americans’ investments and savings, the Freedman’s Bank was incorporated by President Abraham Lincoln in 1865. But it failed in 1874 after white trustees squandered billions of dollars of Black Americans’ money on risky ventures and speculation.

“With the loss of the Freedman’s Bank came the loss of millions of dollars of African American wealth but also a loss of confidence in the banking system,” historian Shennette Garrett-Scott, author of Banking on Freedom: Black Women in U.S. Finance Before the New Deal, told TIME in an interview for this video. “It also really attuned them to the fact that, the belief that they needed to control their own banking institutions.”

It was during this period, after the Civil War and the rise of Jim Crow, in the late 19th century and early 20th century, that Black Wall Streets first emerged, as Black Americans in segregated areas created their own businesses to support their communities.

Established in 1871, the Jackson Ward district of Richmond became known as “the Harlem of the South.” The Southern Aid and Insurance Company (also known as the Southern Aid Life Insurance Company), founded there in 1893, was considered the first Black-owned and operated life-insurance company. At the center of the success of these institutions in Richmond were entrepreneurs like Rev. William Washington Browne, who went from escaping enslavement during the Civil War to starting a mutual aid society called True Reformers; John Mitchell Jr., the 20-something editor of the Richmond Planet newspaper, which sought to expose lynchings; and Maggie Lena Walker, the first Black woman to be a bank president. In addition to running a newspaper, a department store and a life insurance company, she ran the St. Luke Penny Savings Bank from 1903 to 1934.

Walker explained her vision for a Black-owned bank in 1901, at the annual convention of the mutual aid society that inspired the bank, the Independent Order of St. Luke. “First we need a savings bank,” she said. “Let us put our moneys together; let us use our moneys; let us put our money out at usury among ourselves, and reap the benefit ourselves. Let us have a bank that will take the nickels and turn them into dollars.” During the Great Depression, Walker’s bank merged with two other banks and became the Consolidated Bank and Trust Company, and was at one point the longest-running Black-owned bank in the U.S., until it was acquired in 2005.

While Tulsa’s Black Wall Street was burned to the ground in 1921, Black Wall Streets like Richmond suffered “a slower death,” Garrett-Scott says of their decline. Jackson Ward’s peak ran from right after the Civil War to the Depression, and its decline hastened after World War II, due to a combination of redlining; “slum clearance,” which razed older buildings and entire neighborhoods; and highways developed in the 1960s and 1970s that cut through these areas and enabled drivers to bypass them. The gains of the civil rights movement also created new opportunities for places to live and work outside the neighborhood, exacerbating the decline of Jackson Ward.

“The kind of ironic bitter irony is that these roads are also built to move capital and resources and opportunities and businesses out and away from these areas into the suburbs or other parts of the city,” says Garrett-Scott.

In recent years, efforts to support Black-owned businesses and financial institutions have aimed to make sure the stories of Black Wall Streets are not forgotten.

In March 2021, PayPal created an award named after Maggie Lena Walker to honor trailblazing women doing work that empowers marginalized communities. There have also been efforts to invest in Black-controlled financial institutions, given the increased awareness of the long history of discriminatory lending at Wall Street banks over the last century. Especially in the last year, as part of efforts to rebuild trust and renew commitments to racial equality, Bank of America, JPMorgan Chase and Wells Fargo all announced investments of millions of dollars in minority depository institutions (MDIs)—financial institutions where minorities own most of the stock and hold most of the board of directors seats—and in March 2021, the U.S. Treasury Department announced a $9 billion investment in MDIs and community development financial institutions. In a 2019 report to Congress, the Federal Deposit Insurance Corporation said MDIs “play a unique role in promoting economic viability in minority and underserved neighborhoods.”

Celebrities have also played a key role in raising the profile of Black-owned banks. In 2020, Beyoncé released a Black-owned business directory called “Black Parade,” and in the summer of 2016, in the aftermath of a wave of police-violence incidents, rapper Killer Mike during a radio interview boosted the coffers of MDIs by encouraging Black Americans to transfer their money to Black-owned banks. Thousands heeded the call. Now he’s the co-founder, with civil rights veteran Ambassador Andrew Young, of a mobile-banking platform called Greenwood.

That same summer, to help others make similar moves, and in an effort to help close the racial wealth gap, banker Stephone Coward co-founded the organization BankBlackUSA, which provides online guides to Black-owned banks, credit cards, credit unions, savings accounts and loans for homes and small businesses. Site traffic has exploded in the year since the murder of George Floyd catalyzed a national reckoning on race relations.

“We want to be able to bridge the gap when it comes to resources and knowledge,” Coward says of his organization’s mission. He argues that social media, like the popularity of the hashtag #BankBlack, has helped “amplify the movement in a way that was not able to be done in the Civil Rights era or in the ’90s.”

On the surface, thriving Black Wall Streets like Jackson Ward fit the stories people like to tell about living the American Dream. So why aren’t Black entrepreneurs like Maggie Lena Walker more likely to be household names?

Some educators believe it has to do with deep-seated efforts to control how Black people are seen in American society.

“These stories get buried because there is an underlying need to have one group pushed down so that another may rise,” argues Ajena C. Rogers, Supervisory Park Ranger at the Maggie L. Walker National Historic Site at the entrepreneur’s Richmond home. “Maggie Walker was definitely dealing, and her community was definitely dealing, with elements of white supremacy… And the way to keep that going is to suppress the stories that run counter to that narrative of one race being superior over another, and to pass laws that will attempt to starve a community so that they don’t have those funds to keep up homes, so that eventually a neighborhood that was once thriving becomes blighted. To make it so that when integration comes and people have the ability to move out and leave, they do—but it leaves something behind.”

Garrett-Scott believes that the history of Black Wall Streets like Greenwood and Jackson Ward also provides a fuller picture of Black contributions to American society. “African Americans were living out their vision of the American Dream under the kinds of really difficult circumstances that racism left them with, but they were still thriving,” she says, “and they were creating culture and they were creating opportunity and hope and progress for their communities.”

Rogers says entrepreneurs like Walker are role models for everyone.

“These stories are human stories that resonate with you,” she says. “Let’s bring these stories forward and remember those times of Black excellence. And it can come again, if we follow the roadmap that they set before us.”

Write to Arpita Aneja at arpita.aneja@time.com and Olivia B. Waxman at olivia.waxman@time.com. 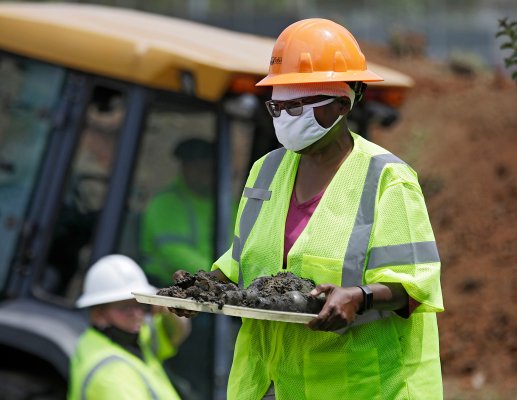 Inside the Search for Victims of the Tulsa Race Massacre
Next Up: Editor's Pick