Palestinians sit at a large table to break the fast during Ramadan as Israeli border police guard Jewish settlers, outside one of the homes they have taken over from a Palestinian family and near other homes of Palestinians facing eviction, in the East Jerusalem neighborhood of Sheikh Jarrah on May 7, 2021.
Heidi Levine—Sipa USA
By Dalia Hatuqa

When Muna Dajani’s grandparents moved into Sheikh Jarrah in 1956, they thought that the traumatic past was behind them. Driven from their home in Baqa in the Western part of the city in the 1948 Arab-Israeli war, they sought refuge in the East Jerusalem neighborhood. The house has a large garden dotted with lemon, loquat, and pomelo trees, named after Dajani’s parents, aunts and uncles.

Now, the family may be forced to leave once more on Aug. 1, to make way for Israeli settlers who are claiming in court that the house was built on land owned by Jews before 1948. “This is our family house—we have life-long memories here,” says Dajani, 38, an academic and environmental researcher at the U.K’s Lancaster University. “When we were kids, we used to gather and play here: on the weekends, during Muslim festivities and other holidays.”

The Dajanis are one of many families facing eviction from their homes, their plight triggering protests in Sheikh Jarrah and beyond. But what the Israeli government initially called a real estate dispute between private parties has now spiraled toward outright war. On Monday, Israeli police escalated its crackdown on protesters by entering the Al-Haram Al-Sharif, site of the revered Al-Aqsa mosque, during the last days of the Muslim holy month of Ramadan. They fired teargas and stun grenades at worshippers, and were met by rocks hurled by Palestinians.

The following day, violence expanded dramatically; Palestinian militants in the Gaza Strip fired rockets at Tel Aviv, Beersheba and other cities, killing at least six, according to medical officials quoted by Reuters, including an Indian domestic helper. Israeli jets conducted numerous airstrikes, killing at least 56 Palestinians, including 14 children, according to the Palestinian Ministry of Health in Gaza. Tor Wennesland, UN envoy to the Middle East, called for de-escalation. “Stop the fire immediately,” he said. “We’re escalating towards a full scale war.”

Palestinian children gather around a Christmas Tree during a ceremony in the East Jerusalem neighborhood of Sheikh Jarrah on Dec. 23, 2009.
Dan Balilty—AP

The roots of this situation lie not in Gaza and the West Bank but in the city Palestinians view as the capital of their future state. In late April, Israeli authorities announced a decision to barricade Damascus Gate, a popular meeting and gathering point for East Jerusalemites, especially in Ramadan. The police said the closure was to ensure safe access to the Old City and “maintain order and security in the area.”

But the issue extended beyond the physical barrier: To many young Palestinians, it revealed how little communal space they had and how even symbols of Palestinian cultural and political life were forbidden in Jerusalem. “Palestinian flags are regularly confiscated when waved in Jerusalem, or in Israel. Palestinian efforts to organize cultural and political institutions in East Jerusalem have been suppressed brutally—offices raided, people imprisoned for organizing,” said Diala Shamas, a human rights lawyer from East Jerusalem. “Mere existence in Jerusalem is met with violence. Organizing and advocacy—regardless of whether they are violent or non-violent—are met with criminalization, silencing, shunning.”

With the Palestinian Authority (PA) having no jurisdiction in East Jerusalem, the protests in Sheikh Jarrah and the Old City have largely been grassroots-based, social media-enhanced popular movements without the formal political leadership that usually governs such a showing in the West Bank or Gaza Strip.

“It is led by non-politicized people, non-party-aligned young people,” says Mahmoud Muna, who runs the Educational Bookshop, a specialist bookstore in East Jerusalem. “This is a different generation that’s basically the result of two Intifadas and a failed peace process. They see in themselves the ultimate power to challenge Israel.”

Muna and others refer to them as the “Oslo generation”: Palestinians born after the peace accords named after the Norwegian capital were signed in the early 1990s. “These are young people who have lived 20 or so years in what Israel tries to promote as an integrated Jerusalem,” Muna says.

A man waves a Palestinian flag near the White House during a protest on May 11, 2021. Democratic Congresswoman Rashida Tlaib, who is of Palestinian descent, compared the Palestinian struggle to how Black Americans have risen up against police brutality in the past year.
Allison Bailey—Shutterstock

In recent weeks, young Palestinians have taken to social media, launching a #savesheikhjarrah hashtag to cast a light on the neighborhood’s situation. But as the hashtag began to trend globally, many Palestinians who have been documenting the incidents of violence at the hands of Israeli authorities in their neighborhood cited the removal of hundreds of social media posts, the suspension of accounts, and the blocking of relevant hashtags.

Palestinians accused platforms like Facebook and Instagram of “systematically” taking down content about Sheikh Jarrah and Al-Aqsa mosque, lending credence to their belief that censorship against Palestinians extends into online spaces often at the behest of Israeli authorities.

Instagram acknowledged the removals, which also affected posts about Colombia and Indigenous communities in the U.S. and Canada, but its CEO, Adam Mosseri, blamed them on a technical glitch, in a series of tweets on May 7. “People around the world, from Colombia to East Jerusalem, use our platform to share what’s happening,” wrote Mosseri. “We know it was a really bad experience. Ultimately I’m accountable for Instagram’s stability, so I own this. I’m very sorry.” But local activists reported having their Instagram accounts suspended for some time as well.

Twitter users also saw their accounts suspended for “violating community standards” and Palestinian digital rights group Sada Social said it identified at least 50 Twitter accounts that were suspended after sharing information about Sheikh Jarrah. Twitter told the UAE-based National that it “took enforcement action on a number of accounts in error by an automated spam filter…[and] are expeditiously reversing this action to reinstate access to the affected accounts.”

The Israeli government does not plan to restrict settler activity in East Jerusalem. On Sunday, Prime Minister Benjamin Netanyahu rejected any suggestion Israel would stop building in the city he says has been the capital of the Jewish nation for thousands of years. “Just as every nation builds its capital and builds in its capital, we also reserve the right to build Jerusalem and build in Jerusalem,” he said.

Young Palestinians in East Jerusalem are aware that there are many forces at play working against them and their plight. “I have seen the Israeli judicial system side with the settler organizations time and time again,” says Mohammed El-Kurd, a 23-year-old writer whose family faces imminent eviction. “It’s not only the loss of property that we suffer from in Sheikh Jarrah; we are also experiencing psychological terror—so-called legal processes take decades. Eventually they drain us financially, psychologically, they drain our humanity.”

But their activism and social media efforts have echoed far and wide, inviting support even from U.S. congressmen and women. Democratic Congresswoman Rashida Tlaib, who is of Palestinian descent, compared the Palestinian struggle to how Black Americans have risen up against police brutality in the past year.

“In 2009, similar events took place, and there was a wave of solidarity with us in Sheikh Jarrah, but there wasn’t a strong presence on social media like now and this kind of activism was absent,” Dajani says, referring to when half of the El-Kurd family home was taken over by Israeli settlers. “Social media has been playing a large role and the young guys in the neighborhood are very active—they have breathed life into our fight, and given power and inspiration to all of us.” 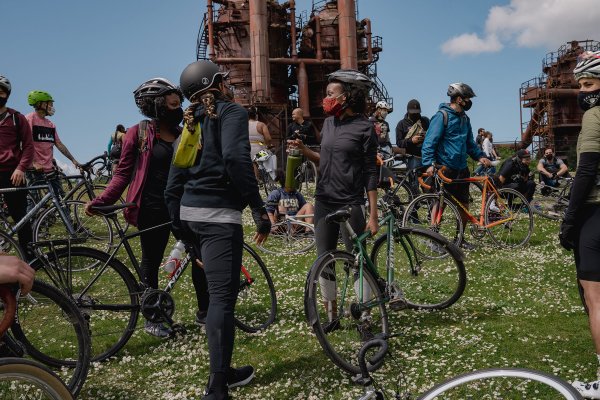 How People of Color Found Community During the Pandemic
Next Up: Editor's Pick