The Facebook Oversight Board's Decision Didn't Change Much for Trump. But It Could Have Implications Far Beyond Him

This March 29, 2018, file photo shows the Facebook logo on screens at the Nasdaq MarketSite, in New York's Times Square.
AP Photo/Richard Drew
Ideas
By David French
French is a senior editor at The Dispatch and a columnist for Time. His new book is Divided We Fall: America's Secession Threat and How to Restore Our Nation. He is a former major in the United States Army Reserve.

Facebook’s new Oversight Board, a new, quasi-independent organization that acts as a kind of supreme court for Facebook’s moderation decisions, issued its most important decision yet. In a lengthy ruling, it determined that Facebook was “justified” when it suspended Donald Trump’s Facebook and Instagram accounts on January 6th, 2021, but that it shouldn’t have imposed an “indefinite” suspension on Trump. The board then gave Facebook six months to “apply and justify a defined penalty.”

In one sense, this decision is simply a straightforward application of Facebook rules and practices. Trump clearly violated Facebook’s community standard on “dangerous individuals and organizations.” Yet it applied a unique and unusual indefinite punishment. Facebook’s “normal penalties” involve removing content, suspending an account for a defined period of time, or imposing a permanent ban. If the Facebook user wasn’t named Donald Trump, the decision itself would be unremarkable indeed.

But the board’s reasoning was arguably more important than its outcome. The way it reached its decision may have far-reaching implications for politicians and other influencers far beyond the scope of this dispute with Trump. Put simply, the board is signaling to “influencers” that they should enjoy no privileges on the platform. In fact, higher standards may now apply.

At the risk of oversimplifying, much of the debate over the moderation of public figures on social media has centered on whether their prominence should provide its own protection. In other words, should presidents be censored at all?

The argument against is often rooted in newsworthiness. Even when a president or political leader says things that might cause an ordinary user to be penalized their words are still notable. Thus (so the argument goes) there’s a public interest in hearing their speech that often doesn’t apply to private citizens who have smaller social media followings. So while many right-wing critics of Big Tech want less moderation in general, they’re especially critical of moderation or removal of major public figures, including the president.

The company, however, told the Oversight Board that it had not previously applied the allowance to content on Trump’s Facebook or Instagram accounts and that it “never had a general rule that is more permissive for content posted by political leaders.” It told the board that it does apply a “‘cross check’ system to some ‘high profile’ accounts to ‘minimize the risk of errors in enforcement.’”

The Board, however, expressed concerns with Facebook’s process. “Unfortunately,” it wrote, “the lack of transparency regarding these decision-making processes appears to contribute to perceptions that the company may be unduly influenced by political or commercial considerations.”

I agree that Facebook shouldn’t be more permissive for political leaders. There shouldn’t be a presidential posting privilege (or a celebrity posting privilege), even though their words do make news. While social media platforms are free to fashion their own moderation rules, creating a two-tiered online justice system that indulges the worst forms of speech—but only so long as the speaker is powerful enough to render their words notable—is not only unfair, it’s dangerous. At the very least, social media companies should apply the rules equally to powerful and powerless alike.

In this view, the scandalous aspect of Facebook’s suspension of Trump is less that the social media giant blocked him from the platform and more that the former president feels entitled to use Facebook, even when he breaks the rules.

Facebook’s Oversight Board has now weighed into this vital debate. It has instructed Facebook to effectively put its thumb on the scales against the site’s most powerful users, and it did so in a way that has echoes in American constitutional law. The board declared that “[w]hile the same rules should apply to all users, context matters when assessing the probability and imminence of harm.” Part of that “context” is the power and reach of the user at issue.

All this adds up to arguing for enhanced scrutiny of influential speakers. The reason is obvious—with greater influence comes greater ability to incite violence. When people are more apt to listen to what you say, they are more apt to do what you ask.

Though the First Amendment doesn’t apply to the Oversight Board’s decisions (it’s a private board evaluating decisions by a private corporation), its reasoning is reminiscent of a Supreme Court case called Brandenburg v. Ohio, which held that the government could prohibit speech advocating criminal conduct only if the speech is “directed to inciting or producing imminent lawless action,” and the speech is “likely to incite or produce such action.”

Posts by “influential users” are far more likely to meet that second prong of the Brandenburg test than posts by ordinary Americans. Thus their enhanced power should carry with it a degree of enhanced responsibility. But make no mistake, that enhanced responsibility should be imposed in an even-handed manner, otherwise Facebook wouldn’t be so much standing against political violence as it would be taking sides in fights that all too often spill into American streets.

Indeed, the Board recognizes this risk and asks that Facebook insulate the “specialized staff” who evaluate political speech by “highly influential users” from “political and economic interference, as well as undue influence.” Put another way, this is an admonition to create formal safeguards to protect impartiality when weighing the relative danger of public speech.

Facebook (and the rest of the nation) have learned a bitter lesson from Donald Trump. An American president can inspire an insurrection, and social media was indispensable to his treacherous aims. Now it’s time to apply what we’ve learned. If Facebook and Instagram can consistently apply the Oversight Board’s guidance to influential users across the political spectrum, they will almost certainly cause leaders to think twice before using their immense platforms to inflict serious public harm. 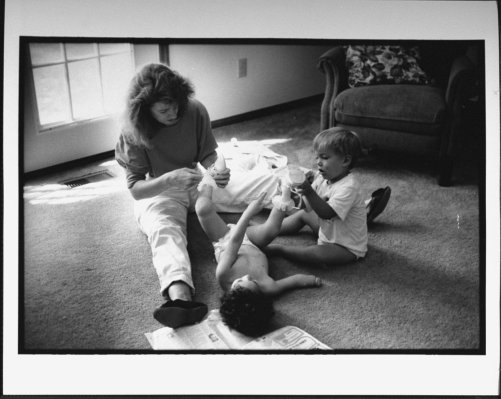 Too Many Moms Can't Afford Diapers
Next Up: Editor's Pick