The Right’s Message to Silicon Valley: 'Free Speech for Me, But Not for Thee'

SAN ANSELMO, CALIFORNIA - JANUARY 08: The suspended Twitter account of U.S. President Donald Trump appears on an iPhone screen on January 08, 2021 in San Anselmo, California. Citing the risk of further incitement of violence following an attempted insurrection on Wednesday, Twitter permanently suspended President Donald Trump’s account.
Photo Illustration by Justin Sullivan/Getty Images
Ideas
By David French
French is a senior editor at The Dispatch and a columnist for Time. His new book is Divided We Fall: America's Secession Threat and How to Restore Our Nation. He is a former major in the United States Army Reserve.

The story of last week’s social media crackdown – especially the most controversial elements, Twitter’s and Facebook’s decision to ban Donald Trump from its platform and Amazon Web Service’s (AWS) decision to terminate its relationship with the conservative social network Parler – is a story that begins with a series of failures. The Big Tech response can’t possibly be understood apart from those failures, and those failures made Twitter and Amazon’s decisions sadly necessary and wise.

By January 6, 2021, it was plain that the political branches of government had utterly failed to contain Donald Trump. He had escaped impeachment in early 2020 even though the evidence was overwhelming that he’d corruptly tried to hijack American foreign policy to pursue personal political vendettas. The national GOP wrapped its arms around Trump even after he lost the election, even after he lied about losing the election, and even as he trafficked in increasingly angry and unhinged conspiracy theories.

On January 6, American law enforcement failed to contain a dangerous and violent Trumpist mob. Chilling video of the MAGA attack on the Capitol shows an outnumbered and overmatched thin blue line bending and breaking before the seething, violent crowd. The resulting occupation of the Capitol was horrifying enough, but if MAGA paramilitaries had reached Congress before it was safely evacuated the day could easily have turned out incalculably worse.

It was also clear that countless thousands of American citizens had failed. Gullible and angry, they were rioting for a lie, and they were using social media – including Parler – to issue depraved threats and to organize resistance to the American republic. Calls for civil war spread across the platform.

As these collective failures convulsed the nation, the individuals who ran Facebook, Twitter, and AWS faced a difficult choice. Do they use their lawful power to help restore order when other institutions had failed? At Twitter and Facebook, that meant potentially yanking the president’s accounts. He had, after all, serially violated the site’s terms of service. His very presence on the platforms was a sign that he enjoyed a certain presidential privilege – a degree of immunity denied the conventional user.

Both platforms ended Trump’s immunity. They pulled the plug.

AWS had a different and perhaps even more serious choice to make. If it took action against Parler, it would temporarily shut down access to the entire site. Until Parler could find a different web hosting service, it would be gone from the internet.

Unbeknownst to virtually anyone outside AWS and Parler, however, weeks of concerns were in play. In a key court filing drafted in response to Parler’s lawsuit against AWS, Amazon notes that its agreement with Parler allows AWS to terminate web hosting services if AWS finds that Parler’s use of AWS’s services “poses a security risk to … any third party.” AWS claims that it notified Parler on November 17 that it was seeking to understand how it handled dangerous content, and over the next several weeks sent over “more than 100 representative pieces of content advocating violence.”

Some of the examples of threatening speech were shocking, including statements like ““Death to @zuckerberg @realjeffbezos @jackdorsey @pichai,” and ““White people need to ignite their racial identity and rain down suffering and death like a hurricane upon Zionists,” and ““HANG THAt N***** ASAP.”

According to AWS, Parler was utterly unable to address to AWS’s concerns. It faced a backlog of 26,000 reported posts that remained on the service, and Parler’s alleged reliance on “volunteers” to moderate content meant that it could not keep pace with the metastasizing threats. Indeed, threats were so endemic within Parler that a data scientist analyzing Parler content founds that in one, single popular Q-themed post “taken from a random sample of the dataset,” roughly 10 percent of the comments “explicitly call for the murder of George Soros.”

Why spend so much space outlining the factual context? Because context matters, and discussions of theoretical and hypothetical ramifications of “Big Tech’s” decision should not be divorced from the meaningful facts. American democracy itself was under attack, and there were already online indications that armed protests would be staged throughout the country. These three companies, staffed with thousands upon thousands of American citizens who love their country, had not just the liberty to respond meaningfully, they had the power to respond meaningfully.

I freely admit that the power these companies possess is immense and subject to abuse. Actions taken in a moment of national crisis can also be taken in moments of ordinary ideological conflict. Indeed, conservatives the length and breadth of Twitter and Facebook reacted with rage and fury. The decried Big Tech “totalitarianism.” They condemned the platforms as “Orwellian.” They raged that they may be reacting to a riot today, but tomorrow they’ll block you for using the wrong pronouns.

But if Facebook, Twitter, and AWS were totalitarians, they were a truly odd set of despots. After all, they were standing by as an avalanche of anger poured down upon them from their own platforms. Conservatives decried Twitter on Twitter. Trumpists condemned Facebook on Facebook. It’s been some time since I read George Orwell’s 1984, but I’m fairly sure that the protagonist, Winston Smith, didn’t feel free to heckle Big Brother on BigBrother.com.

Yes, critics were able to find and point out unacceptable double standards. Foreign despots, for example, maintain Twitter accounts. If platforms are going to move against speech that credibly threatens or actually incites violence, they should do so fairly and justly. There are no “good riots.” If Big Tech is going to use its power to quell urban unrest, it should show regard for peace in Portland, Oregon just as it does in Washington, D.C.

That’s a moral and prudential argument. It’s an argument that says Big Tech should govern itself according to norms of viewpoint neutrality. It’s a serious argument, worth having. But there’s another argument from critics of Big Tech, worth resisting. That’s the demand that government step in and restrict the freedom of private corporations to moderate the platforms they built. Decisions regarding online speech should instead be made under government oversight.

Indeed, in 2019 Senator Josh Hawley introduced legislation to that effect, his ironically-named Ending Support for Internet Censorship Act would have handed an immense amount of control over online speech to the Federal Trade Commission. In other words, he’d substitute the judgment of free American citizens who are subject to market forces with the judgment of political appointees subject to partisan pressure.

The proposed act was constitutionally problematic, but it was also unwise for more practical reasons. The American experience of the last four years should be a sobering reminder that the American government is not inherently virtuous or even inherently competent. Should the next Donald Trump (or Trump himself if he wins again) have power even over your social media posts?

It’s odd to see professed populists who rightly argued that Christian bakers and florists should not be forced to use their talents to celebrate events (such as same-sex weddings) they find objectionable turn around argue that a different set of Americans should be forced to host seditious speech and threats of violence. That looks a lot like elements of the right are saying to citizens in Silicon Valley, “free speech for me, but not for thee.”

Big Tech is powerful, no doubt. And power corrupts. There is reason to be vigilant in criticizing overreach and condemning double standards. And there may well be a time when Big Tech acts in concert to unjustly crush valuable American perspectives merely because those perspectives offend corporate ideologues. But it was not this time. This time, technology companies acted effectively to protect the republic when the government could not. They deserve our thanks, not our rage. 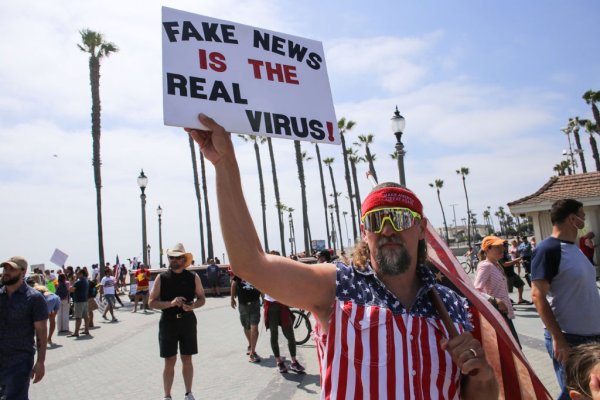 Trust in Social Institutions Eroded Further in 2020: Study
Next Up: Editor's Pick