The U.S. Birth Rate Dropped Last Year, But Don't Blame It All on the Pandemic

A man who tested positive for COVID-19 and was not permitted to attend the birth of his child on April 28, 2020, in Oceanside, N.Y., gets emotional seeing his newborn via FaceTime.
Jeffrey Basinger—Newsday/Getty Images
By Emily Barone

About 142,000 fewer babies were born in the U.S. in 2020 than in 2019, according to provisional figures from the Centers for Disease Control and Prevention released May 5. But unlike most health news pertaining to last year, the pandemic was not the primary cause for the decline.

Although there were predictions that COVID-19 triggered a baby bust, the 2020 data provides little insight into whether or not the pandemic actually impacted birth trends in the U.S. This is because the vast majority of 2020 babies were conceived prior to the pandemic: full-term babies who were conceived around January 22, when the first case of COVID-19 was reported in the U.S., were born in late October. And those conceived after March 13, when the U.S. declared a national emergency, were born starting in mid-December. But as the chart below shows, the number of births was down throughout the whole year, except in February:

While the pandemic may have played some role in the number of births during the final weeks of the year, the overall picture is more indicative of a continued fertility decline that started years before the public health crisis. Since 2014, the last year during which the number of births increased, the country has experienced a six-year downward streak, averaging 2% fewer births per year.

Birth rates have been sinking across demographics, and 2020 was no exception. Every race and ethnic group and every age group between 15 and 44 (which account for 99.7% of births) had a lower rate.

Rates among those younger than 15 and older than 44 stayed the same. For girls ages 15 to 19, the rate dropped 8%, continuing a decline in teen pregnancy that’s happened every year since 1991 with the exception of 2006 and 2007.

The forces of the pandemic, including economic uncertainty, financial instability and health-related anxieties, could exacerbate the downward trend even more in 2021. An April analysis of birth records in 25 states conducted by the Associated Press found that those states collectively had 9.3% fewer births in January 2021 and 10% fewer births in February 2021 compared with the same months a year earlier. However, it’s possible that a rebound could occur later in the year.

The CDC report doesn’t explain why birth rates are declining, but other surveys and research suggest that multiple factors are at play, including financial constraints and lack of societal support for working parents. The pandemic threw these problems under a harsh spotlight, motivating lawmakers to address the cost and work-family challenges that American parents very often face. The pandemic relief bill that passed in March upped a $2,000 child tax credit to $3,600 for each child under age 6 and to $3,000 for children up to age 17, though the provision will expire after this year. More recently, President Joe Biden has floated proposals to expand paid leave programs and improve child care access and affordability. Whether those ideas become legislation is uncertain, as Republicans aren’t fully supportive. 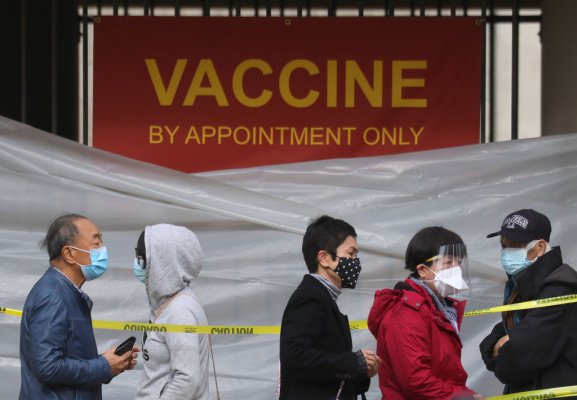 Why Men Are Lagging in the Vaccine Rollout
Next Up: Editor's Pick