A girl in class with her social studies book. Southington, Conn., May 1942.
Fenno Jacobs for Office of War Information—Universal Images Group / Getty
By Dana Schaffer and Pete Burkholder

What are Americans supposed to know about the history of their country? Whose stories should be taught in classrooms, whose should be omitted and who decides? Such questions inform recent education bills like Louisiana’s HB564 and Iowa’s HF802, which prohibit the teaching of “divisive concepts” and are just two of the latest entrants in an often-contentious dialogue reaching back to the founding of the Republic itself. But while there’s been a steady stream of opinions from politicians, pundits and professors about where to find “Historical Truth,” it’s always been hard to know how exactly the American public would answer these questions.

Our recent national survey of people’s understandings and uses of the past, the full results of which will be published this summer, gives voice to the unheard masses. A collaboration between the American Historical Association and Fairleigh Dickinson University, and funded by the National Endowment for the Humanities, the poll of 1,816 Americans reveals the tensions of a nation riven by racist violence and political anxieties. Yet, those same results are reason for optimism, revealing commonality and paths forward for a divided nation.

The survey data suggest the divisions are real when it comes to how we think about our collective past. For example, 69% of respondents self-identifying as Democrats believe that women generally receive too little historical attention, while fewer than half that number (34%) of Republicans agree. That trend continues for other groups: racial and ethnic minorities, as well as the LGBTQ community, are seen by Democrats as shortchanged by historians, by a two- or even three-to-one margin, relative to their Republican counterparts’ views. Meanwhile, Republicans are up to twice as likely as Democrats to say that religious groups, the Founding Fathers and the military get inadequate historical consideration. Most strikingly, 84% of Republicans believe that history should celebrate our nation’s past, while 70% of Democrats think history should question it.

Nor are divisions simply a matter of political affiliation. White respondents are more than twice as likely as people of color to feel that the histories of racial and ethnic minorities garner too much attention. Those with a college degree see men dominating the thoughts of historians at nearly twice the rate that non-degreed respondents do. Age is likewise a factor, with people in the 18-29 bracket calling for more attention to LGBTQ history by a 19-point margin, relative to those in the 50-64 age range. The “history wars” are thus polarizing beyond the party affiliations within which they are typically framed.

Yet, if the survey results’ divisions are evident, so are the points of commonality. Asked whether it was acceptable to make learners uncomfortable by teaching the harm some people have done to others, over three-fourths of respondents said it was. That breakdown largely remained, across age groups, college education, gender or geographic location. Even by political affiliation the similarities held steady, with 78% of Democrats and 74% of Republicans supporting the appropriateness of confronting painful history. (The only outlier here was among Hispanic respondents, where just 58%—though still a clear majority—defended making history learners uncomfortable.)

Perhaps most importantly, our findings offer a possible path out of the history wars by changing the focus from what sets of facts are taught to how they are taught. To be clear: we firmly support teaching the histories of peoples and events that have been omitted from traditional narratives. But we also recognize the impossibility of covering everyone and everything in the past, especially given the conflicting viewpoints expressed above.

As it stands, two-thirds of our survey respondents felt that “history” is primarily just an assemblage of facts. Moreover, our respondents voiced disdain for the facts-centric approach most of them encountered in high school, and which continued, though to a lesser extent, in college. But, although facts do form the basis of historical inquiry, they are only that—a means to various ends, as opposed to ends unto themselves. Unsurprisingly, by an eye-popping ratio of greater than seven-to-one, respondents reported more interest in learning history as a form of inquiry as opposed to mastery of factual content.

Such inquiry-based pedagogies have been advocated (though unevenly adopted) for years, with the American Historical Association, selected school programs and individual teaching mavericks taking leading roles in curricular change. But our survey indicates that the predominant modes of instruction, to say nothing of content, remain out-of-step with methods that make students want to learn more about the past.

History education, like politics, shouldn’t run on the basis of polls. Yet it’s worthwhile to consider the extent to which Americans are asking for evidence-based techniques that embrace the ambiguities of the past, and that challenge their understandings of history itself. More so than any education policy based on favoring a particular narrative or viewpoint, such a realignment holds the potential for making the past more accessible and applicable—and more unifying for the American public.

Pete Burkholder is professor of history at Fairleigh Dickinson University in Madison, NJ. He serves on the national advisory board of the Society for History Education, and the editorial board of The Teaching Professor.

Dana Schaffer is deputy director at the American Historical Association. She has overseen numerous public history projects and conferences, and she also serves on the board and is chair of the advisory committee of National History Day. 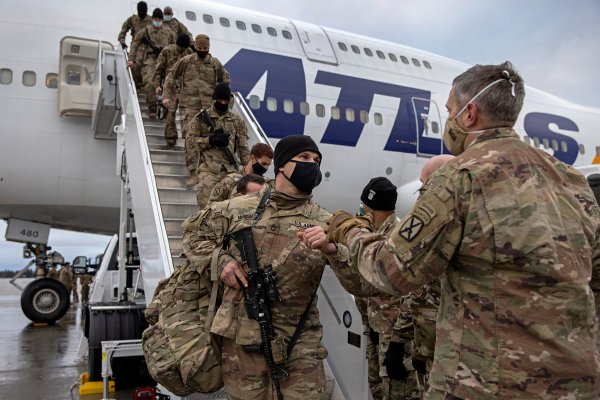 History's Warning for the U.S. Withdrawal From Afghanistan
Next Up: Editor's Pick