‘It Was All Worth It.’ After Being Injured and Arrested by Police, These George Floyd Protesters Now Feel Vindicated

The repercussions Coricia Campbell felt for protesting George Floyd’s death last May were devastating. Not only was she arrested, but while she was sitting in a Florida jail for almost two days, the 32-year-old Marine veteran missed an important surgery to remove her gallbladder.

Campbell, who suffers from irritable bowel syndrome and gastro­esophageal ­reflux ­disease, has not yet been able to reschedule what would be a life-changing operation because of pandemic-related delays. She has to take three pills, three times a day, to manage worsening symptoms, on top of following an extremely strict diet. But when a Minneapolis jury found former police officer Derek Chauvin guilty of killing Floyd, the trauma of the last year seemed to fall away.

“It was all worth it,” says Campbell, 32, who lives in Jacksonville. “It’s restoring my faith in the justice system.”

Chauvin was convicted on all counts Tuesday of second-degree murder, third-degree murder and second-degree manslaughter—a milestone for the racial justice movement in a nation where law enforcement officers are rarely found guilty of killing civilians. It comes nearly a year after Floyd’s death touched off a nationwide reckoning on race and the largest sustained mobilization against racial injustice in recent memory.

Thousands of people were arrested at demonstrations against racism and police violence in the U.S. in May and June, according to the Crowd Counting Consortium, which collects data from news reports. After taking part in a major moment in history, young protesters, particularly those of color, faced chilling consequences, including prosecution, costly fines, loss of employment and a stigma that could affect their ability to obtain housing, jobs and education. Dozens were beaten with batons, hit by cars, doused in pepper spray and critically wounded by rubber bullets, beanbag rounds and other police weapons.

Like Campbell, many were overcome with emotion when they heard the historic verdict read Tuesday. It meant their sacrifices were not futile and that their voices were heard.

Ellen Urbani—who hobbled out of a protest in Portland, Oregon, last summer with two broken bones—burst into tears at her kitchen counter. In between sobs, the 52-year-old tried reassuring her wide-eyed teenagers that she was crying tears of happiness. “Everything we marched for, we just learned what the outcome was,” she says. “This is what we were all standing for.”

As she was demanding justice for Floyd with hundreds of other mothers in Portland on July 24, Urbani was hit in the foot by what she believes was a rubber bullet, which broke her big toe and shattered another bone in her foot. “So many of us became a piece of George Floyd’s story,” Urbani says. “It is the tragic legacy and also the bountiful legacy of his experience and his death.”

Ellen Urbani was hit in the foot by what she believes was a rubber bullet at a protest in Portland, Ore., on July 24.
Courtesy Joan Henderson-Gaither/Ellen Urbani

Many have described the Chauvin trial as an inflection point in American history. The trial has now made history in a city whose police department has a long history of racist incidents and in a nation where criminal charges for police officers are rare and convictions extraordinary. Despite its outcome being exceptional in the justice system, activists agree Chauvin’s conviction is a huge step forward in the fight to end police violence and to secure police accountability.

In New York City, where Dounya Zayer was pushed by a police officer during a Black Lives Matter march on May 29, the 21-year-old now questions whether the conviction should be celebrated, considering the thousands who were hurt or arrested while fighting for it, as well as the other Black people killed by police since Floyd’s death.

“As much as people want to believe it was a victory, look at how much it took to get this victory,” she says. “It’s really hard to take these things as wins when you see how much has been lost in the process.”

Shantania Love was hit by what she believes was a rubber bullet at a protest in Oak Park, Calif. on May 29, permanently blinding her right eye.
Courtesy Shantania Love

In Sacramento, Shantania Love is more hopeful. The 30-year-old mother of two was permanently blinded by a projectile that hit her in the eye as she was walking away from law enforcement officers at a protest in Oak Park, California, on May 29. Love believes it was a rubber bullet that struck her as she turned around to look for her brother.

She underwent two surgeries in an attempt to save her vision and now struggles with mundane tasks like pouring a cup of juice or walking up and down the stairs because of her skewed depth perception.

But on Tuesday, she cried for 15 minutes straight, knowing she didn’t lose her eye in vain. “It’s a sigh of relief that finally we get a little bit of justice, and what we were out there doing, protesting, wasn’t done for no reason,” Love says. “I’m not blind for nothing.” 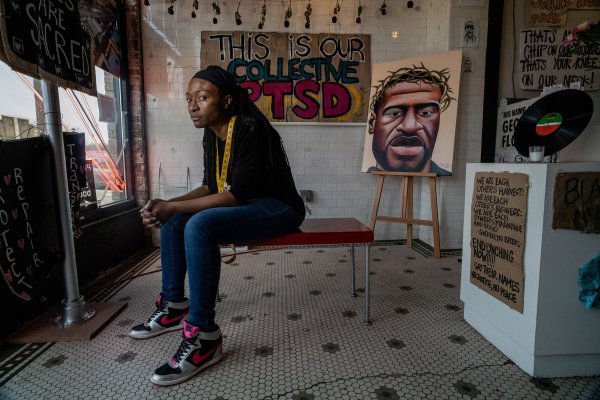 After the Derek Chauvin Trial, Can George Floyd Square Last?
Next Up: Editor's Pick