'The Putin Regime Is Trying to Kill Him.' Alexei Navalny's Ailing Health Is Worrying the World

Russian opposition leader Alexei Navalny appears via video link for a court hearing, in which it was directed that he remain imprisoned, in Moscow on Jan. 28, 2021.
Sergey Ponomarev—The New York Times/Redux
By Madeline Roache

Alexei Navalny, the Russian opposition figure and Kremlin antagonist, has been moved into a prison hospital, Russia’s state penitentiary service (FSIN) said on Monday, after doctors warned he was in extremely poor health and could have only days to live. But friends and colleagues called the transfer a Kremlin “ploy” to convince the world he was being treated, and that his life was still very much in danger.

FSIN said that Navalny’s health was “satisfactory” and that he was being examined by a doctor every day. But Vladimir Ashurkov, Executive Director of Navalny’s Anti-Corruption Foundation (FBK) told TIME that the hospital does not offer an “adequate level of care for his condition”, and that the prison authorities continue to deny independent doctors the ability to assess Navalny. “There is nothing positive about this transfer – it is a ploy by the Kremlin to convince Russians that everything is okay,” Vladimir Kara-Murza, a Russian democracy activist and chair of the Boris Nemtsov Foundation For Freedom, said.

Navalny’s health has been deteriorating since he was imprisoned, and he began a hunger strike three weeks ago to protest his lack of medical treatment. On Saturday, Yaroslav Ashikhmin, a cardiologist, published test results in a Facebook post that he said showed Navalny had heightened creatinine levels that could cause kidney failure, and high levels of potassium that could lead to a cardiac arrest at “any moment”.

His friends and colleagues say that the Russian government is denying him proper care to make a statement. “The Putin regime is trying to kill him slowly, painfully and for the whole world to see. This echoes back to some of the most horrific pages in the history of the Soviet gulag and now the modern gulag under Putin,” said Kara-Murza.

An image shared on Navalny's Instagram account shows him on a hospital bed surrounded by his wife and two children as his treatment continues in Berlin on Sept. 15, 2020.
@navalny/Handout/Anadolu Agency/Getty Images

When did Navalny’s health begin to deteriorate?

Putin’s fiercest critic only recently spent five months in Berlin recovering from a poisoning that he said was ordered by Russian President Vladimir Putin. (The Kremlin denies Navalny’s claims and has said it has seen no evidence that Navalny was poisoned.) Upon his return to Moscow on Jan. 17 he was arrested and on Feb. 2, he was sentenced to two and half years in jail for violating parole from a case dating back to 2014, which he claims was politically motivated.

The sentence prompted international outrage, with President Joe Biden on Feb. 4 saying “He should be released immediately and without condition.” The E.U. and U.S. slapped sanctions on several Russian officials, including asset freezes and travels bans.

Within weeks of being imprisoned, Navalny complained in Instagram posts about pain and numbness in his back and leg. (It’s not yet clear whether the pain was connected to the poisoning.) He also said that he has experienced treatment amounting to “torture” through sleep deprivation, claiming that guards woke him up every hour throughout the night. Other inmates, he said, were banned from speaking with him or forced by prison authorities to inform on his movements.

On March 31, he announced he was starting a hunger strike to protest the prison authorities’ refusal to grant him medical attention. “I have the right to be seen by a doctor and get medicine,” he said in an Instagram post on March 31.

A dozen days into his hunger strike, Navalny said in an Instagram post that prison guards shoved candy in his pockets to tease him. Navalny’s wife, Yulia, who visited him on April 13 said that he weighed 76kg (167 lbs), 9kg (19lbs) less since he began refusing food.

Navalny’s personal physician, Anastasia Vasilyeva, and three other doctors attempted to visit Navalny on Sunday, April 18. Vasilieva posted a video on Twitter claiming that they had “stood for two hours and begged” to be let into the jail, but they were refused entry.

Ashurkov said the authorities have refused to provide proper medical treatment to Navalny in prison as punishment for his anti-corruption activism, including his YouTube investigation posted on Jan. 19, alleging that members of Putin’s inner circle spent $1.35 billion in illicit funds to build the president an opulent on the Black Sea. “We are confident that all major decisions regarding his well-being are made by President Putin. The fact that he is in prison and being denied proper medical care is, in my opinion, a direct order from the very top,” he said.

Read more: The Inside Story of How Alexey Navalny Uncovered Putin’s $1.3 Billion Palace

An officer of the Russian Federal Penitentiary Service walks near the gate of the penal colony N2, where the Kremlin critic has been transferred to serve out a prison term, in the town of Pokrov on March 1, 2021.
Dimitar Dilkoff—AFP/Getty Images

How has the world responded to reports about Navalny’s health?

U.S. national security adviser Jake Sullivan told CNN on April 18 that there would be “consequences if Mr Navalny dies” and Russia would be “held accountable by the international community”, while President Joe Biden said his medical treatment was “totally unfair and totally inappropriate”.

E.U. foreign policy chief, Josep Borrell, tweeted on April 18 that the bloc was “deeply concerned” and called for prison authorities to grant access to Navalny’s medical team immediately. E.U. leaders are expected to discuss the situation on Monday April 19.

Supporters of Navalny stage a demonstration organized by the group "Art of Rebel" outside Downing Street in London on April 13, 2021.
Facundo Arrizabalaga—EPA-EFE/Shutterstock

How has the Russian opposition responded?

Navalny’s FBK organization had originally planned to hold protests for the release of the Kremlin’s most prominent critic later this Spring. But in response to reports about his deteriorating, health Leonid Volkov, Navalny’s chief of staff, and Ivan Zhdanov, FBK’s director, in a YouTube video on April 18 urged people to protest in squares across the country on Wednesday 21 April, the same day as Putin’s annual state of address. “They’re murdering Alexei Navalny — in a terrifying way right before our eyes,” Volkov said in the video.

The stakes for those Navalny’s supporters who choose to protest are high. Thousands of people were detained in a vicious police crackdown during mass protests across Russia in January and February that called for the activist’s release.

The authorities appear to have accelerated their attempts to silence Navalny’s team. On April 16, Russian prosecutors asked a Moscow court to designate FBK and other organizations linked to Navalny as “extremist”. The list currently names 33 organizations, including Islamic State, The Taliban and Jehovah’s Witnesses. If approved, the move would outlaw their operations and could result in jail time for its members. The prosecutors said such organizations create conditions for “changing the foundations of the constitutional order” and called their activities “undesirable”, in a statement.

Ashurkov believes the Kremlin is trying to distract the public from the declining level of support for Putin’s ruling United Russia Party, largely driven by frustration over deteriorating living standards, ahead of parliamentary elections in September. According to a March survey by the Moscow-based independent pollster, the Levada-Center, 27% of respondents support the United Russia party, down from 31% last August. “He’s trying to eliminate his most potent political opponent and our organization,” Ashurkov said. 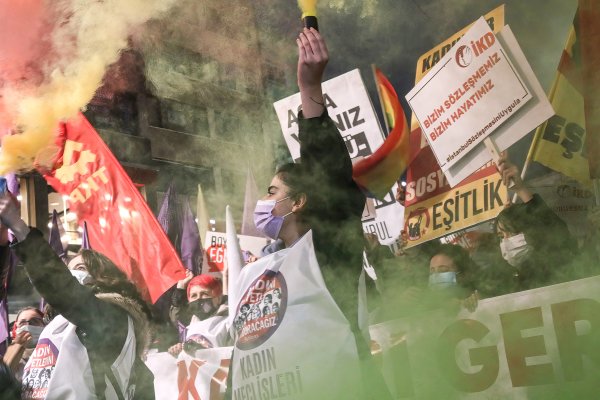 Angelina Jolie and Elif Shafak on Why Men Need to Be Engaged on Women's Rights
Next Up: Editor's Pick