The conservative environmentalist Benji Backer wants to change how the climate movement has long been synonymous with the liberal movement. The president and founder of the American Conservation Coalition, a non-profit organization working to mobilize young conservatives around environmental action, Backer is working to engage members of the Republican Party on climate change.

“Climate change has been seen as a democratic issue while Republicans have been seen as the denialist party,” Backer tells TIME in a TIME100 Talks interview debuting Friday. “And while that has been painted that way, it couldn’t be further from the truth.”

Far-right Republicans and outspoken climate deniers have “dominated the airwaves,” says Backer, noting how in 2015, Oklahoma Sen. James Inhofe presented a snowball to the senate floor as evidence against climate change, and pointing to former President Donald Trump, who has referred to climate change as a “hoax invented by the Chinese.”

“While there are some very loud voices on the right who have been denying climate change for many years, there have also been a lot of quieter voices who I believe represent the majority of conservatives behind the scenes working towards a brighter future,” Backer says.

“As a young person, I believe that our generation will solve climate change,” Backer, 22, says.

“It wasn’t until I was exposed to the science and exposed to the dangers of not fighting climate change, that I truly engaged on the topic,” Backer says.

Backer notes that some of the “most climate friendly states,” in regard to reducing their carbon footprint, are led by Republicans, including Vermont, New Hampshire and South Dakota, which are governed by Phil Scott, Chris Sununu and Kristi Noem, respectively. These states have some of the lowest CO2 emissions in the U.S. Between 2005 and 2017, Maryland, led by Republican Gov. Larry Hogan, saw the largest decrease in CO2 emissions in the country, reducing emissions by 38%.

As a college senior at the University of Washington in 2019, Backer testified in front of Congress alongside environmental youth activists Greta Thunberg, Jamie Margolin, and Vic Barrett. “It was one of the greatest moments of my life,” Backer says. “I felt incredibly honored to be sitting next to three incredibly influential activists on a different political spectrum than my own, and to be able to present at Congress with a right-of-center and three left-of-center voices saying the exact same thing, which is that we need to do something about climate change. It was a perfect example of how powerful uniting in this generation can be.”

Backer, along with the American Conservation Coalition, has drafted a conservative, market-focused response to The Green Deal — the American Climate Contract.

He’s also looking forward to working with President Joe Biden’s administration on climate policy, “in whatever way they want to cross ideological and partisan lines.”

“Climate change is a decade-by-decade long issue, and it doesn’t have a political party,” he says. “With innovation and bold youth action, we can solve the climate crisis across partisan boundaries.” 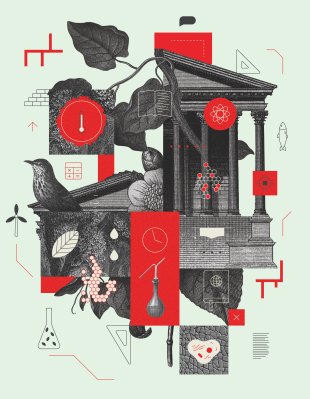 The Unexpected Ways Climate Change Is Reshaping College Education
Next Up: Editor's Pick