What’s all this talk about global hunger? I don’t know about you, but I just tucked into a burrito and there are plenty more where that one came from. But that doesn’t mean the nation’s soaring obesity rates are anything more than a rumor. Most of the people I work with look pretty darn good, so QED right?

Something similar is true of climate change—at least if you’re Oklahoma Sen. James Inhofe, chairman of the Environment and Public Works Committee, and a man tasked with knowing a thing or two about, um, the environment and public works. The Senator, who has made something of a cottage industry out of arguing that climate change is “the greatest hoax ever perpetrated on the American people,” at last has drop-dead, case-closed proof that he’s been right all along. The evidence: a snowball. And not just any snowball, one right there in Washington, DC!

Inhofe brought his snowball onto the floor of the U.S. Senate on Thursday and declared that “we keep hearing that 2014 has been the warmest year on record.” Yet in a plastic bag, right on his desk, he had the evidence to demolish that claim. “I ask the chair, you know what this is?” he said. “It’s a snowball, and that’s just from outside here, so it’s very, very cold out, very unseasonable.” Then he tossed the unexpected snowball to the unsuspecting chair and returned to his prepared text with self-satisfied, “Mm-hmm.”

Inhofe is completely correct, of course: It was very, very cold on Thursday—unseasonably so. And it was also very, very hot in Opa Loca Florida, where the temperature was 87º F (30º C)—awfully sweltering even for that part of the country, at least at this time of year. Presumably, Opa Loca’s unseasonable steam bath is equally compelling proof that climate change is real.

Look, it’s easy to take shots at Inhofe, which is why everyone is doing it today—here and here and here and here just for starters. But the implications are real. Either he really doesn’t understand that weather isn’t climate, that long-term trends are different from short-term bumps, that what happens at your house or in your town really, truly isn’t what’s happening everywhere else on the planet, or he does know and he’s pretending he doesn’t. Either way, it’s hard to argue that he’s the man you’d want as the Senate’s leading voice on climate policy.

Here’s hoping, if nothing else, that Inhofe has an easy commute home tonight. It’ll be long-awaited proof that the U.S. highway system has at last solved the problem of traffic. 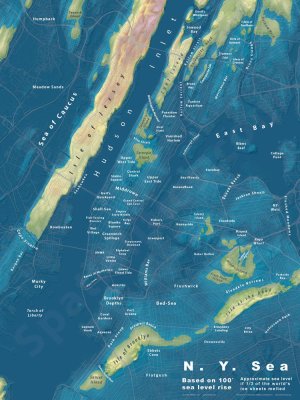 These Maps Show How Much Trouble We'd Be in if the Sea Level Rises
Next Up: Editor's Pick