Back in August of 2014, Tsakhiagiin Elbegdorj had Xi Jinping over for lunch.

Mongolia’s then president had been coached by Chinese officials about the pomp expected when entertaining their head of state—but it was a tall order. “In Mongolia, we don’t have many rooms for dancing,” Elbegdorj laughs.

He decided instead on a more low-key approach. Elbegdorj, Xi and their wives enjoyed a meal of Mongolian staples—grilled meat, cheese, dumplings—at the president’s residence in a southern part of the capital Ulaanbaatar. In these quiet surroundings, Elbegdorj says the two leaders broached several sensitive issues. They discussed the potential for ethnic Mongolians to freely travel between Mongolia and the Chinese territory of Inner Mongolia. They also spoke of nationalist Chinese calls for Mongolia to be absorbed into the People’s Republic, and even discussed Tibet’s spiritual leader the Dalai Lama, who is venerated by Mongolian Buddhists yet reviled by Beijing as a dangerous seditionary.

“It was really great,” Elbegdorj tells TIME in an exclusive interview. “Later, [Xi] delivered a big speech in our parliament saying that China will respect your way of life, Mongolia’s independence, and territorial integrity. That sounded really good for us.”

Read more: Life in Ulaanbaatar, the World’s Most Polluted Capital

It was just one of some 30 occasions, by Elbegdorj’s reckoning, that he and Xi met during his two presidential terms from 2009 to 2017. During that time, Elbegdorj had overseen an upgrading of the relationship from mere bilateral ties to a “comprehensive strategic partnership” in 2014. A year later, Xi hailed relations as the “best ever.”

Yet Elbegdorj today has become one of China’s harshest critics in a region where few in power dare speak out. This stems not least from Beijing’s recent aggressive efforts to curb Mongolian language and culture in Inner Mongolia, which lies to Mongolia’s south.

Around four times the size of Arizona, the area of dunes and grasslands is home to around five million ethnic Mongolians—some 50% more than in Mongolia itself. Mongolian was the chief language of instruction for ethnic Mongolian schoolchildren in Inner Mongolian schools until September. Since then, new directives have decreed that Mandarin Chinese be used for key subjects, threatening the Mongolian language with extinction, critics say. Beijing insists it fully respects Mongolian culture and says the promotion of Mandarin will help boost the competitiveness of graduates. But the move prompted rare public protests in Hohhot, Inner Mongolia’s capital—followed by the inevitable ruthless crackdown.

Mongolians protest against China's plan to introduce Mandarin-only classes at schools in the Chinese province of Inner Mongolia, at Sukhbaatar Square in Ulaanbaatar, the capital of Mongolia on September 15, 2020. -
BYAMBASUREN BYAMBA-OCHIR/AFP via Getty Images

In a letter addressed to Xi, sent via the Chinese embassy in Ulaanbaatar, Elbegdorj bemoaned the “growing atrocity that seeks to dissolve and eliminate Mongolians as an independent ethnicity through their language.” (The letter was returned with a rebuke not to meddle in China’s internal affairs.)

The precariousness of Mongolian culture or identity isn’t news to Elbegdorj. Born in a camel-hair tent on the Steppe, the youngest of eight sons in a herding family, he was conscripted into the Mongolian Army as a young man, eventually winning a scholarship to study journalism in Ukraine owing to poems he submitted to a military magazine exalting the glory of socialism.

Upon returning to Ulaanbaatar, he worked as a journalist and helped lead Mongolia’s fledgling democracy movement. After the 1990 bloodless democratic revolution, which ended Mongolia’s seven decades as a Soviet proxy, he served two terms as prime minister, on either side of stints studying public policy at Harvard Kennedy School and working at the Mongolian language service of Radio Free Asia in Washington D.C.

“When you are trying to keep our Mongolian children from learning their mother tongue and Mongolian script, that becomes a Mongolian ethnic issue, and then it became my issue,” Elbegdorj says. “Because I love Mongolia.”

Elbegdorj’s U-turn regarding his southern neighbor spotlights both China’s increasingly aggressive regional posture as well as the difficulties smaller nations face when confronting a superpower they’re ever more reliant upon for economic development. (China currently buys around 90% of all Mongolian exports.) How will they choose between democratic values and prosperity as the world coalesces into rival camps behind Washington and Beijing?

Mongolia is hoping to hedge its bets by being both a NATO “Partner Across the Globe” (alongside such countries as Japan and New Zealand) and an observer at the Shanghai Cooperative Organization (SCO)—the Eurasian security pact led by China and Russia. But “The risk for a place like Mongolia, as it is for many neighbors of China, is if animosity grows and that forces these places to pick a side,” says Prof. Julian Dierkes, a Mongolia expert at the University of British Columbia. “Because there’s no way for Mongolia to escape Chinese influence due to economic dependence.”

Beijing’s clout over Mongolia is best illustrated by the treatment of the Dalai Lama, whose title is Mongolian in origin. Mongols converted to the Gelug (Yellow Hat) school of Tibetan Buddhism in 1581 and His Holiness remains widely revered. But Beijing slapped tariffs on Mongolian exports during the Dalai Lama’s last visit in 2016 and he has not been invited back since.

The flags of Mongolia, China and Russia fly in the wind during the Vostok-2018 (East-2018) military drills at Tsugol training ground not far from the borders with China and Mongolia in Siberia, on September 13, 2018.
MLADEN ANTONOV/AFP via Getty Images

The strategic tightrope makes presidential elections slated for June “very important,” says Elbegdorj, who believes China and Russia “are doing everything they can to [swing] our elections in their favor.”

The populist incumbent is former wrestler-turned-businessman Battulga Khaltmaa, who came to power in 2017 by harnessing nationalist anger at foreign firms exploiting Mongolia’s mineral reserves. Battulga cites Ghengis Khan as his idol, though these days appears to model himself more on Russian strongman Vladimir Putin, who he has met several times. His multifaceted business empire is named Genco reportedly after the fictitious olive oil company that was a front for The Godfather boss Vito Corleone.

Under Battulga, Mongolian politics have taken an authoritarian turn. He pushed, albeit unsuccessfully, for the reinstatement of the death penalty that Elbegdorj scrapped in 2015. He has also suspended judges and levied corruption charges at a slew of rivals, including Elbegdorj, who denies any wrongdoing.

China and Russia as Threats to Mongolia

Building ties with the U.S. has long been key to Mongolia’s “third neighbor policy,” a long-running strategy to cultivate relationships beyond China and Russia. The land that sent its warriors westwards in the 13th century to build history’s biggest contiguous land empire did so again in 2003 and 2009, in support of U.S. missions in Iraq and Afghanistan respectively. But while Elbegdorj speaks of “shared American values, in terms of human rights, developing freedom,” it remains unclear how Washington can effectively support Ulaanbaatar without antagonizing both Moscow and Beijing.

“Our location is strategic because Mongolia sits on the backbone of China, while punching the underbelly of Russia,” says Elbegdorj with a chuckle.

Meanwhile, the country faces stiff economic challenges. As commodity prices soared in the early 2000s—especially those of gold and copper, in which Mongolia abounds—the nation briefly became the world’s fastest-growing economy with its best-performing bourse. Dust-covered prospectors from North America and Europe quaffed expensive brandy in Ulaanbaatar’s plush nightclubs. But the mineral boom was short-lived, and by 2017 Mongolia was forced to go to the International Monetary Fund for a bailout.

It might be convenient to chalk Mongolia’s woes up to the notorious “resource curse” bedeviling countries that sink vast investments into a small number of commodities while failing to diversify. But Mongolia is, in effect, a “double hostage,” says Prof. Dierkes. “It’s hostage to commodity prices and hostage entirely to China.”

The situation is accentuated by the COVID-19 pandemic. Although Mongolia has weathered the crisis well, with just over 12,000 confirmed cases and only 17 deaths, infections are beginning to spike. China has naturally been swift to step in with vaccine donations and sales.

Oyunsuren Damdinsuren, a senior lecturer at the School of International Relations and Public Administration at the National University of Mongolia, says many people believe “our neighbors are trying to influence Mongolia’s election overtly through vaccine diplomacy. And covertly, through social media and other means.”

Mongolian political parties spend huge sums on electoral campaigns and there is a widespread suspicion that much comes from either Russia or China—although the allegations are difficult to prove because the parties lack financial transparency. “This is another big reason for Mongolia’s widespread corruption and erosion of democracy,” says Damdinsuren. (The country’s ranking in Transparency International’s Corruption Index currently stands at a discreditable 111.)

Elbegdorj is not immune from the grubby political fray. While he fights his own corruption allegations, he was himself criticized by the U.S. and U.N. for the jailing of a political rival on graft charges in 2012. Asked whether he has a role in his current predicament, Elbegdorj is evasive, though alludes to an instinct of those in power to find “scapegoats.”

Since he left office, Mongolia’s neighborhood has become even tougher. Xi has removed presidential term limits, effectively allowing him to rule for life, while Putin has just signed a constitutional revision that could let him stay in power until 2036. “I feel that we have just one neighbor,” says Elbegdorj, “China, Russia, have become like one country, surrounding Mongolia.”

It’s a precarious position with no easy remedy. “Every day, we face very tough challenges to keep our democracy alive,” says Elbegdorj. “Mongolia is fighting for its survival.” 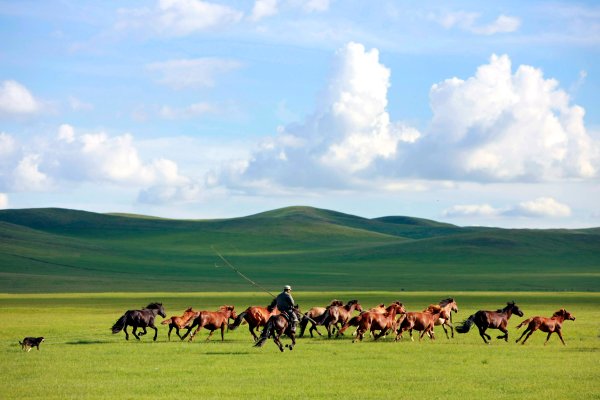