'More Opposition in Mao's Time.' Why China's Xi Jinping May Have to Rule for Life

In the end, dissent was negligible, just as Xi Jinping likes it. Sunday’s vote to remove term limits from the Chinese presidency, thus allowing the incumbent Xi to rule beyond his erstwhile 2023 retirement date — and possibly for life — was passed by 2,958 votes in favor, with just two against and three abstentions.

The final tally at China’s National People’s Congress annual parliament at Beijing’s Great Hall of the People was hardly surprising. Xi has spent his first term purging the ruling Chinese Communist Party (CCP) of any faction that challenged his omnipotence, while dialing up censorship, amassing more than a dozen separate leadership roles and assembling a budding cult of personality.

“The great dream of national rejuvenation encourages us to keep striving,” NPC Chairman Zhang Dejiang told delegates after the vote, urging them to “thoroughly study and apply Xi Jinping Thought … and realize the Chinese Dream.”

But China’s return to strongman politics dredges up dark memories of the nation’s tribulations under Mao Zedong, whose ill-fated Great Leap Forward and Cultural Revolution cost tens of millions of lives. With reverence for Xi a necessary condition for career advancement, there’s very little incentive to voice differing opinions, with the lack of vigorous policy debate a real worry for continued good governance. Today, this has possibly calamitous consequences far from China’s borders given the world’s number two economy remains the single largest contributor to global GDP growth.

Read More: China’s Lurch Toward One-Man Rule Under Xi Jinping Should Worry Us All

“There was more opposition in Mao’s time than today,” says Professor Kerry Brown, director of the Lau China Institute at King’s College, London, and author of CEO, China: The Rise of Xi Jinping. “It’s kind of bizarre because the consequences of opposing then were so high but people still did it. And now you’ve got almost complete silence.”

Not least because since Xi’s eponymous political thought was added to the constitution, challenging him could be construed as treasonous. But the question remains why the 64-year-old princeling believes centralizing power is now necessary, despite the very real risk of rekindling secession crises and sycophancy that reformer Deng Xiaoping guarded against by diffusing power in the 1982 constitution.

One likely reason is that as Xi’s immediate predecessors — Jiang Zemin and then Hu Jintao — increased the space for policy debate, this also led to factional politics and venal cliques that presented an existential challenge for the party. Xi’s targeted anti-corruption campaign has both restored public faith in the CCP and united it behind the totem of his leadership.

“It’s committing political and career suicide and risking financial ruin for anybody to actually oppose Xi,” says Professor Steve Tsang, director of SOAS China Institute at the University of London.

Although this risks making the party more brittle, Xi can call on plenty of evidence to justify centralizing power. The fall of the Soviet Union has long troubled the CCP hierarchy, but the more recent bedlam that followed the ousting of autocratic regimes during the Arab Spring, as well as the 2008 financial crisis and liberal democracy’s recent floundering everywhere, have no doubt catalyzed China’s ideological tightening.

“Donald Trump in particular has made people think: ‘Wow, this is a really unstable and unpredictable world where there might well be a trade war, and we need stable, predictable leadership in China to be able to deal with this,’” says Brown.

Chinese President Xi Jinping drops his ballot, during a vote on a constitutional amendment lifting presidential term limits, at the National People's Congress (NPC) at the Great Hall of the People in Beijing, China March 11, 2018.
Jason Lee—Reuters

Dissent among the Chinese populace has been more prevalent that the NPC vote indicates, though, highlighted by a flurry of censorship for even vague references to the constitutional amendment, including cartoon memes of Winnie the Pooh (a longtime allegory for the portly Xi.) Although only a handful of public figures have voiced discontent openly, Li Datong, a prominent retired state newspaper editor, caused a stir by posting an open letter that pointedly warned: “This could destroy China and the Chinese people.”

It may ultimately bode ill for Xi also. For while Mao’s authority owed much to reverence for his revolutionary exploits, and Deng’s leadership was rooted in fatherly admiration, Xi “is much more, if you like, feared,” says Tsang.

But if cadres only obey Xi because they have no other choice, nobody knows how he will be treated once out of office. Until Xi’s anti-graft campaign, officials who’d served on nation’s apex Politburo Standing Committee (PSC) were assured a safe retirement. But then Xi purged former PSC member Zhou Yongkang, the former head of China’s security services, who was convicted of bribery, abuse of power and leaking state secrets in 2015. By ripping up that orthodoxy and countless others, Xi might be forced to rule for life even if he has no desire to.

“Xi has already created a lot of enemies,” adds Tsang. “Can he be sure that after he has retired — after three, four terms of office — that he and his family will be left alone?” 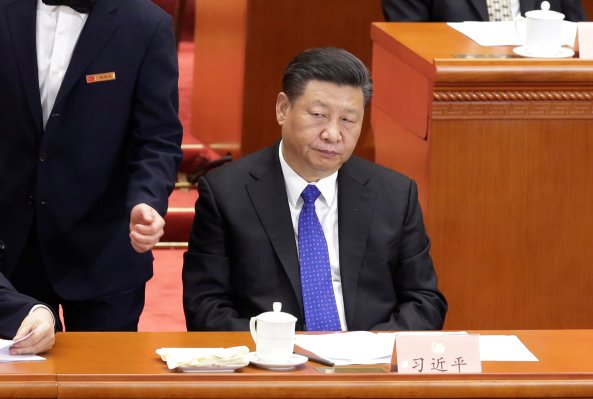 China's Annual Parliament Has Rarely Felt Like Such a Sham
Next Up: Editor's Pick