Asare Amaya, 10, mourns for her father, German Amaya, as family and friends are shown via a Zoom broadcast at the Maspons Funeral Home in Miami on Aug. 8, 2020. German Amaya, who died from COVID-19, had worked for 11 years at the Fontainebleau Miami Beach luxury hotel before he was furloughed in March. In late June, the family says, the hotel cut health care coverage for workers who had been laid off during the pandemic; in turn, the family lost his $10,000 death benefit.
Joe Raedle—Getty Images
By Jeffrey Kluger

There’s been a collective quality to the dying the world has witnessed since the beginning of the COVID-19 pandemic. The nearly 3 million global deaths that have been recorded so far have not been discrete events; rather, each one has radiated outward, leaving holes in families, neighborhoods, entire communities. There is perhaps no hole more gaping than the one left in the life of a child when a parent is taken too young—a loss that leads to traumatic grief, depression and, as research has shown, academic problems and even a higher risk of unintentional death or suicide.

Now, a study published April 5 in JAMA Pediatrics has attempted to take a census of the growing number of children in the U.S. age 17 and younger who have lost at least one parent to the pandemic. Not only is the size of that grieving population alarming, the study showed, so too is its make-up, with Black children suffering a disproportionate share of so terrible a loss.

“We’re opening up the newspaper everyday and looking at the growing number of people who have died,” says Rachel Kidman, lead author of the paper and an associate professor in public health at Stony Brook University. “But we’re not thinking about the number of people left behind and that’s a staggering amount.”

Determining just how staggering took some doing. Without an actual headcount of every U.S. parent claimed by COVID-19, the researchers were left to estimate the number of orphaned or partially orphaned minors using a computer model they dubbed the “parental bereavement multiplier.” Relying on underlying census data, they developed simulations of kin networks that allowed them to model how many cousins, aunts, uncles, children, parents and siblings the average person of a given age and ethnic or racial group has during life and would leave behind in death.

Overall, they calculated, every life that COVID-19 claims costs an average of 0.078 children a parent, or one child for every 13 pandemic deaths. That factors out to more than 43,000 children so far—up to 20% more than would have been expected during an average non-pandemic year.

The investigators also estimated that, in a hypothetical world without COVID-19 vaccines, 1.5 million Americans could be expected to die of the disease before natural herd immunity is reached. That’s roughly triple the death toll so far, leaving behind 116,900 parentally bereaved kids. Clearly, this is not likely to be the case as the vaccine rollout accelerates, but the researchers included that estimate in their work partly to demonstrate the potential consequences of inaction or poor vaccine uptake.

“I do think it’s useful for people to realize the importance of the vaccine in curbing the pandemic and to protect the gains we’ve made,” says Kidman. “We also don’t want to let our guard down because there are variants emerging.”

The racial disparity the study turned up is of a piece with America’s larger history of leaving communities of color underserved by health care. While Black Americans represent 13.4% of the overall population, according to the U.S. Census Bureau, they represent 20% of the parentally bereaved kids in the study—a sort of surcharge on grief that in a fairer world the Black community would be spared. In addition, while the Census Bureau calculates that 23% of all American kids live in single-parent households, the number is over 62% in the Black community. That leaves Black children at increased risk of being left entirely orphaned if they lose their sole parental caregiver. Finally, according to the Pew Research Center, about 8% of Black children are being raised by a grandparent—double the number of White children. With the elderly population representing more than 80% of COVID-19 deaths so far, grandparent-dependent children are at even greater risk of being left entirely alone.

“We know that the burden of mortality is not shared equally and that there are strong racial and ethnic disparities,” says Kidman. “So it’s not surprising that we found that orphanhood is disproportionately experienced by children of color.”

For children who have lost a parent or caretaker, mitigating the impact of the trauma is not easy—especially as the pandemic continues to unfold. The very things that do so much to help a child recover from grief—active engagement in school; spending time with friends; face to face encounters with teachers, counselors and extended family—are impossible as so much of the country remains in at least partial lockdown. For now, Kidman and her colleagues are hoping for government to step in—much as it did for families that suffered a loss in the Sept. 11 attacks—ensuring that children are informed about the Social Security survivor benefits to which they’re entitled, for example, and instituting a national push to identify all kids who have lost a parent and connect them to mental health care and other resources.

The death of a parent is cruel in the extreme for any child and no amount of intervention will ever set things fully to rights. But care and counseling can at least ease the suffering, making it possible to bear a pain that will likely endure long after the pandemic itself has been brought to heel. 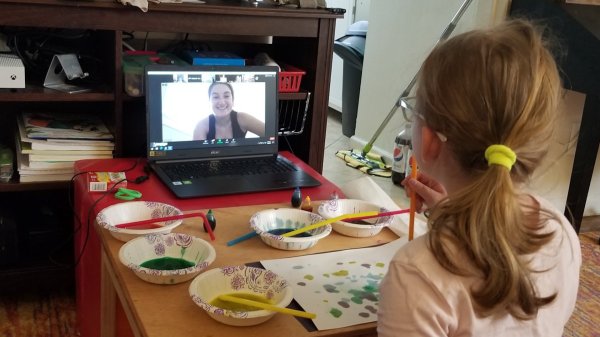 How One Company Helped Its Remote Employees Manage Childcare
Next Up: Editor's Pick