The pandemic relegated Democratic power lawyer Marc Elias to fighting election lawsuits on an iPad from his home in Northern Virginia. He traded his suit and tie for a sweatshirt, and he argued cases with his two dogs lying next to him on the couch. That’s where he worked last fall as Donald Trump’s campaign sought to overturn Joe Biden’s victory, sometimes attending two Zoom meetings simultaneously to keep up with the workload. “I don’t sleep a super amount anyway,” he says in a March 16 interview, “but during that time period it was very intense.”

Elias has earned a reputation as the nation’s most aggressive Democratic election lawyer. The 52-year-old is a partner and chair of the political law practice at Perkins Coie, the Democratic party’s go-to firm. He served as general counsel for John Kerry and Hillary Clinton’s presidential campaigns, successfully litigated recounts for former Senator Al Franken and North Carolina Governor Roy Cooper, and carved out a niche as a campaign finance guru. But was in 2020 that he skyrocketed to national prominence and became something of a resistance hero.

First Elias represented Democratic groups fighting to expand voting access before the 2020 election. Then he battled the Trump campaign, which filed a trove of futile lawsuits to overturn the 45th President’s loss. In the tense post-election months, Elias notched 64 legal victories against the Trump campaign and lost just one case. He has his own website, Democracy Docket, where he posts updates on litigation and fundraises for his efforts. He’s amassed nearly half a million followers on Twitter, his home office has a ring light for his virtual MSNBC hits, and his January 2021 appearance on actress Alyssa Milano’s podcast was titled, “Marc Elias saves Democracy, one court at a time.”

But Elias’ new challenge may prove the most formidable: fighting Republican state legislators, who are drafting hundreds of bills to tighten voting laws across the U.S. Already, Elias has lawsuits pending in Georgia and Iowa, which he filed hours after their governors signed bills making it harder to vote. And with states like Arizona, Florida, and Texas on track to pass similar legislation soon, his docket will almost certainly grow.

The stakes couldn’t be higher— for Elias, the millions of votes that hang in the balance, and, he argues, for the health of American democracy as a whole. “A hundred years from now, if we don’t succeed, what history books will write about this time will be about the pivot from the age of American democracy to a post-democratic America,” Elias says. “There is a lack of recognition about what a dangerous place we are in right now.”

It was on December 7, 2020—exactly one month after news networks declared Biden the President-elect—that Elias realized the battles over voting access wouldn’t end anytime soon.

It was clear by then that Trump’s efforts to overturn Biden’s victory were doomed. But the Texas Attorney General filed a lawsuit with the Supreme Court in an attempt to invalidate Biden’s win in Georgia, Michigan, Pennsylvania and Wisconsin, arguing that the battleground states had unlawfully used the pandemic to relax their voting rules. The Supreme Court dismissed the complaint four days later, but not before it had been endorsed by 17 Republican Attorneys General and 126 Republican congressional lawmakers. As Elias watched the filings come in, he realized Trump’s baseless claims of voter fraud would continue to dominate the GOP’s agenda long after Trump vacated the White House. “They’re no longer united by trade,” Elias says. “They’re no longer united by economic policies. They’re united by shrinking the electorate.”

So he was prepared when hundreds of bills designed to restrict voting rights began popping up in state legislatures. As of March 24, 361 bills had been introduced to restrict voting access in 2021, largely in Republican-led legislatures, according to the Brennan Center for Justice, a nonpartisan think tank tracking the legislation. Republicans say these bills are necessary to maintain safe and secure elections. Both Democrats and voting-rights experts argue they aren’t about security, and instead would disenfranchise minority voters. (On November 12, the Department of Homeland Security’s Cybersecurity & Infrastructure Security Agency issued a statement classifying the 2020 election as the most secure in U.S. history, saying, “There is no evidence that any voting system deleted or lost votes, changed votes, or was in any way compromised.’)

Elias and his team of 55 lawyers at Perkins Coie have been closely monitoring the legislation and staying in touch with stakeholders on the ground. In conjunction with local lawyers, they’ve already challenged the two bills that have become law in Iowa and Georgia. The Iowa lawsuit, which was filed in state court on March 9 on behalf of the League of United Latin American Citizens of Iowa, alleges that by including provisions that shorten both the number of hours polls stay open and the amount of time to request an absentee ballot, among other measures, the law places an “undue and unjustified” burden on voters and violates the state constitution.

Georgia’s new law, which the state’s Republican governor signed March 25 and provoked a national outcry, includes provisions that shorten the time for voters to request an absentee ballot, prevents non-poll workers from distributing food and water within 150 feet of a polling place to voters waiting to cast a ballot, and prohibits election officials from mailing absentee-ballot applications to all registered voters. Elias’ lawsuit, which was filed in federal court on behalf of the Black Voters Matter Fund, Rise Inc., and the New Georgia Project, alleges that the law would have a disproportionate impact on voters of color and violates the Constitution’s First and 14th Amendments as well as Section 2 of the 1965 Voting Rights Act, which prohibits racially discriminatory voting practices.

Elias is not the only lawyer entering the fray. Civil rights groups like the NAACP legal defense fund and the Lawyers’ Committee for Civil Rights Under Law have filed separate litigation against the Georgia law. But trying to overturn state laws will be much more difficult than disputing the Trump campaign’s frivolous post-election lawsuits, Elias says. He worries that judges will prioritize state legislatures’ authority to determine their own laws over the rights of voters. “There’s [going to] be a lot of the pressure put on the judiciary to protect democracy from an attack by state legislatures, and that’s a lot to ask state judges and federal judges to do,” he says.

Experts are also skeptical about voting rights attorneys’ ability to garner victories in a federal judiciary that Trump stacked with conservative appellate judges, or at a Supreme Court that has become more conservative in the eight years since it gutted a key section of the Voting Rights Act requiring certain states and counties with histories of discrimination to obtain federal permission before changing their voting practices. Whether courts allow laws like Georgia’s to stand could tip the balance of power in Washington: if left on the books, they could have disastrous implications for the Democrats in the 2022 midterm elections as they defend razor-thin majorities in the House and Senate.

Elias’ work has drawn criticism. Republicans excoriated him for the role he and his firm played in hiring the research firm Fusion GPS in 2016 that commissioned the infamous Steele dossier examining Trump’s ties to Russia. Recently, he represented Rita Hart, an Iowa Democratic congressional candidate, in an attempt to reverse her slim election loss in the House. Hart withdrew her challenge, but Republicans claimed Elias had conflicts of interest as he also represented some Democratic members of Congress who would have determined Hart’s fate. They also cited the Fifth Circuit Court of Appeals’ decision to sanction Elias and his team of lawyers in March for filing a motion in a Texas voting rights lawsuit without mentioning they had unsuccessfully filed a nearly identical motion last September. (Perkins Coie said in a statement it disagreed with the decision and supports its attorneys).

Elias has also been scrutinized by watchdog groups for his work on campaign finance issues, including his role in convincing the Federal Election Commission to loosen restrictions on congressional lawmakers engaging with Super PACs. “He is not a big fan of restrictions on money in politics,” says Paul S. Ryan, Vice President of Policy and Litigation at the non-partisan accountability group Common Cause. “He has done a very good job as an attorney of fighting for the ability of political parties to raise and spend money however they choose.”

Ultimately, Elias says the best way to protect ballot access is through federal legislation— if it can get to Biden’s desk. Democratic lawmakers are mounting a counteroffensive in Congress to pass the “For the People Act,” a massive election reform bill that would expand voting rights and overhaul the campaign finance and redistricting processes. The bill passed the Democratic-controlled House, but it faces an uncertain future in the Senate, where passage almost certainly would require some type of reform to the filibuster, the Senate rule mandating a 60 vote threshold to pass most bills. “In 2020, I was telling everyone you need to support litigation,” Elias says with a chuckle. “I am now telling everyone, ‘Don’t count on litigation.’ … If you want to take on this problem, the way to do it is through federal legislation.”

For now, Elias is focusing on what he can control, one legal brief at a time. “We will do the best we can, with the tools we have, with the courts as they are,” he says. “I promise you, we will fight.”

Sometime in the near future, he may even have to trade his iPad for an actual courtroom. 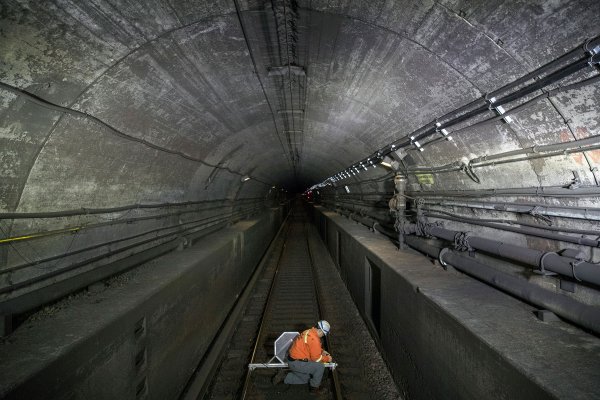 Why the Democrats' Infrastructure Bill Hinges on One Verdict
Next Up: Editor's Pick