Matt Gaetz Gets Headlines for the Scandals. He Should Worry About the Receipts

Rep. Matt Gaetz is having a very bad week.

Federal authorities are investigating him and a buddy for an alleged sex-trafficking ring that may involve underaged women. A shocking CNN report says he showed photos and videos of his female sexual partners to House colleagues, including on the floor of the chamber. The Daily Beast’s portrait of Gaetz as a man-about-town is less rakish than sleazy. Gaetz may have been dating a 17-year-old, according to reports. Congressional Leadership is annoyed that one of its rising spokesmen could find himself tanked and gave them no heads-up. Conservative media has started to eat one of its own stars. And no one expects ex-President Donald Trump to stay loyal even to one of his most reliable defenders.

To be crystal clear: every one of these facts is bad.

But as D.C. buzzes about the salacious details whirling around Gaetz, a third-term Republican from the Panhandle, it’s worth remembering this: the allegations that have felled many figures in American life haven’t been the ones that have grabbed headlines. Al Capone went down for tax evasion. Hotel tycoon Leona Helmsley checked herself into the slammer in 1989 for tax mistakes. Mafia icon John Gotti’s 1992 conviction came, in part, from loansharking.

In other words, you can be a public enemy for bad conduct but it’s often the receipts that do you in. The same rules apply in Washington. The biggest threat to Trump was never either of his two history-making impeachments, but rather the IRS audit of his taxes and the ongoing probe coming out of Manhattan prosecutors’ offices. Rep. Aaron Schock got roasted for a lavish decorating job in his D.C. office that evoked Downton Abbey. Scrutiny over that eventually led to disclosure that he had billed for mileage reimbursements that doubled what his odometer showed, per Politico’s reporting. (Prosecutors eventually dropped their case.) Rep. Duncan Hunter used campaign money for multiple affairs, including one with a lobbyist. Rep. Duke Cunningham lived on a defense contractor’s 42-foot yacht, rent-free, until he relocated to federal prison. The yacht’s name? The Duke-Stir.

Gaetz’s case is curious for any number of reasons. For one, the investigation around him began while his bestie Trump was still in office. There’s an overlay of international politics involved, with a sideshow storyline about the Justice Department allegedly approaching Gaetz’s father, a former Florida politician, about funding a mission to find an ex-FBI agent missing in Iran. Gaetz’s claims that he is being extorted complicates it, as does his bankshot attempt to drag a Fox News host into the mess.

A story of this magnitude doesn’t stay discreet once it’s been revealed. Reporting from The New York Times indicates Gaetz may have been sending sexual partners cash on apps like Apple Pay in exchange for drug-fueled sexual experiences. His afforementioned pal, a former tax collector in Florida, is already under indictment for federal sex trafficking charges. Gaetz’s top spokesman hit the offramp today.

But it’s not likely to be the most sensational headlines that bring Gaetz down. As he has hinted, Gaetz thinks the fact he paid for associates’ travel through campaign cash is proof of innocence. But it might prove more complicated than that. The use of campaign cash for personal expenses is pretty much a textbook no-no. So even with the unwelcome presence of outsider billionaires footing the bill for our politics, it’s still true that the ledgers are still lethal.

Washington is a city prone to easy distraction. Gaetz knows this, which is why allegations about a relationship with a minor segued jarringly into a spy thriller about bringing an American agent home from Tehran. No one understood this better than Trump, who upon insulting former President George W. Bush would change the story by attacking the Pope. When Trump was shown to having bragged about sexual assault, the story pivoted to Hillary Clinton’s stolen emails. Every day of Trump’s four-year presidency was a constant battle between what spiked your blood pressure over breakfast and what inspired the panic attack over lunch.

Gaetz isn’t Trump. He’s an echo, not a sonic boom. And he doesn’t have a hold over the GOP the way Trump does. Schock held on for so long because he was a cash cow for the party; Gaetz is a gadfly and an annoyance to his party’s leadership. He’s a prototype of lawmakers who care more about the headline than the substance. Rep. Madison Cawthorn brags about focusing more on communications than legislating. Rep. Marjorie Taylor Greene is taking her cues from Trump directly. But there’s a vast difference between being the President who represents the nation and being a legislator who has about 700,000 constituents in a deep-red corner of the country.

Where there’s overlap: receipts. Finances are a funny thing. You can distract and obfuscate on rhetoric and history. Rewriting the record is an inherent part of the game. Nietzsche even wrote a whole treatise on who to use and abuse history. But financial ledgers are tougher to hide. There’s a reason why Eliot Ness got Capone, and it wasn’t because the infamous gangster was a bad guy. It was because he had a sloppy accountant. 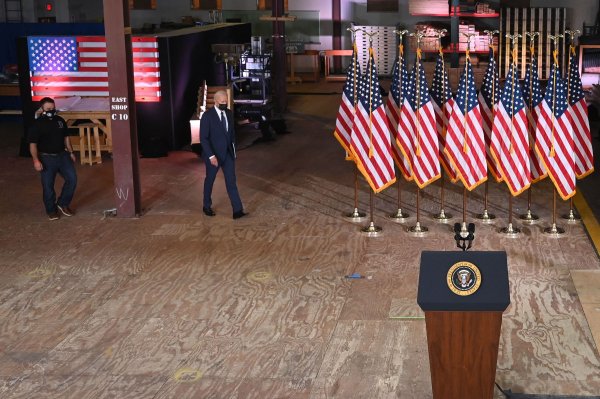 Why Americans Could Be Paying for Biden’s Infrastructure Plan Long After the Roads Are Built
Next Up: Editor's Pick