On a bus traveling through the Strawberry Mansion neighborhood of North Philadelphia, passengers are jolted out of their reveries by a resounding neigh, followed by the clip-clop of hooves. A Black mother motions for her young son to look out the window where he sees a group of gallant Black cowboys on horseback, galloping alongside cars and trucks on the city streets. He smiles, wonderstruck.

This scene comes near the end of Concrete Cowboy, a coming-of-age tale that follows 15-year-old Cole, played by Stranger Things’ Caleb McLaughlin. After getting expelled from his school in Detroit, Cole is sent to live in Philadelphia with his estranged father Harp, played by Idris Elba. Harp, a rugged urban cowboy himself, spends his days with a community of Black riders at the Fletcher Street stables, where he helps maintain and care for the horses. The stables are the bedrock for the neighborhood, providing a safe haven from the challenges many of them face in their everyday lives—and they soon provide one for Cole, too.

The cowboys of this urban Western aren’t a creation of the film—they’re based on a real community that has a century-long history in Philadelphia, with some of the real-life Fletcher Street riders making appearances in the movie, as well.

Hollywood Westerns long ago popularized the image of the sharp-shooting, fearless, white cowboys of American lore. Although these classic films largely exclude the riders of color who helped settle the West, historians estimate that one in every four cowboys was Black. Concrete Cowboy—which premiered at the Toronto International Film Festival last year and releases on Netflix on April 2—counters Hollywood’s white-washed Western narrative by intertwining true stories of the Fletcher Street cowboys into its fictional tale.

Based on Greg Neri’s young adult novel Ghetto Cowboy, the film’s authenticity shines in its depiction of the rich history of the Black cowboy community in Philadelphia—and the existential threat they face from gentrification.

The Origins of the Black Riders in Philadelphia

When Harp and other Fletcher Street riders in the film gather around a fire, they swap stories of the century-long history of the Black riders in Philadelphia, many of which are based in fact.

There are various origin stories of Philadelphia’s Black cowboys, but the community is believed to date back to the early 20th century when Black Southerners began migrating north for industrial jobs, bringing their livestock with them. Black riders in Philadelphia drove horse-drawn carriages, delivering milk, food and other goods around the city. Others worked as cowboys passing through, herding cattle and helping settle the Western frontier. Later, they worked as jockeys and horse trainers for professional horse races.

When automobiles and trains replaced horses as the primary mode of transportation, Black cowboys kept their animals in the city, even attending auctions to save unwanted horses from being killed—a tradition carried on by the riders today. The community continued to thrive with several Black-owned riding clubs across Philadelphia, a number of which were located on Fletcher Street in Strawberry Mansion.

Black-owned stables have existed on Fletcher Street for more than a century, and the area continues to be a cornerstone for the Black urban cowboy community in Philadelphia.

“It’s the root—everything grew out from Fletcher Street,” Ellis Ferrell, the 82-year-old founder of the Fletcher Street Urban Riding Club (FSURC) tells TIME. Since the age of 16, Ferrell has been riding horses in Strawberry Mansion. He started working with local youth after a stint in the Army.

The stables run by Ferrell and Black riders before him became a safe haven for many young people. “[The kids] always had the stables to come to after school instead of being on the street and getting in trouble,” Ferrell says. “It taught them to have respect and responsibility: for the horses, their elders and themselves.”

Ferrell poured all of his earnings as a truck driver into caring for the horses and maintaining the stables so he could continue “keeping kids off the street.” After retiring, he dipped into his own social security to keep the operation alive—a sacrifice that is intrinsic to a quiet, resilient attitude that Ghetto Cowboy author Greg Neri calls “the cowboy way.”

Ferrell launched the Fletcher Street Urban Riding Club as a nonprofit in 2004 so that the operation could begin accepting donations for the community work he and generations of Black cowboys had been doing free of charge for years. The operations are run entirely by volunteers and local community members, while donations help pay for supplies to maintain the stables and care for the horses.

The Real Faces of Concrete Cowboy

The history of the stables exists largely in the oral storytelling of Black riders who continue to support them today. And these stories, in turn, informed Neri when he was doing research for Ghetto Cowboy in Philadelphia. “Everything that happens in that book happened in another way in real life,” says Neri, who is an executive producer for Concrete Cowboy. He calls Cole “a pastiche of many different kids” and the adults “representative of the people that I see there.”

Concrete Cowboy was primarily filmed in the North Philadelphia area, including in and around makeshift stables near Fletcher Street. The film also features several of the real cowboy denizens working the stables, with roles that reflect their own lives, while some riders helped shape the screenplay and served as advisors on set.

“They say they’ve been there for 100 years. I wanted to capture the spirit—I wanted to make sure that they felt like their story was accurate,” says Ricky Staub, the director and co-writer (with Dan Walser) of Concrete Cowboy.

Jamil Prattis, who has maintained horses for 15 years, on Fletcher Street in 2017.
Sam Nixon

Fletcher Street rider Jamil “Mil” Prattis plays a paraplegic cowboy named Paris, who helps Cole learn the ropes at the stables. In a particularly powerful scene, Paris shares an extremely personal story with Cole that is based on Prattis’ real life.

“The stories that he tells as Paris losing his brother is the story of what happened to him and his brother,” Staub tells TIME. “I would tell him, ‘Just be present in the moment and say what comes to your heart when you’re retelling the story of your brother.’ It was really beautiful to watch.”

Ivannah Mercedes, who plays a cowgirl named Esha, Cole’s love interest, is another Philadelphia native who “started riding as soon as she was able to sit up.” As one of few Black cowgirls in the urban horse-riding community, Mercedes says her role in Concrete Cowboy is her own life story brought to life on the big screen.

“Esha herself is my story,” Mercedes tells TIME. “This was the only movie I’ve ever seen that focuses on Black cowgirls and cowboys. It means the world to me to be able to have my debut as an actress and also be telling a story that is so close to my heart.”

The Battle Against Gentrification and Urban Redevelopment

Black horsemen in Philadelphia have been repurposing abandoned warehouses, empty lots and rowhouse shells to stable their horses for decades. But as the town began to gentrify in the 1980s, the city began seizing the property riders had used for years for urban redevelopment.

After leading several different stables around the city, Ferrell has been a witness and a victim of the near decimation of the city’s Black cowboy community. “We are being squeezed in by the gentrification of this city,” he says. “There’s not that many horses because most of the stables are being sold to people or being bought for developers.”

In 2004, the city seized a cluster of stables in Brewerytown, another North Philadelphia neighborhood, and demolished them to make way for apartments, displacing around 100 horses in the process. The stables that were once scattered across Philadelphia began to close, leaving riders with few places to house their animals. As Black cowboys continued to face down existential threats, they always found their way back to Fletcher Street, the heart of the urban rider community.

After the city destroyed the Brewerytown stables, Ferrell moved the horses into makeshift corrals and onto an open Fletcher Street lot. But in March of 2008, city and animal-welfare officials raided Ferrell’s Fletcher Street stables—an incident that is re-enacted on Concrete Cowboys. Officials ordered the immediate removal of 40 horses and seized at least two they believed to be sick. The horses were quietly returned days later after veterinarians determined they were healthy. The city bulldozed the makeshift corral and a century-old stable days later, in a devastating blow to the riding club.

With the help of a benefactor, Ferrell was able to acquire three lots for the riding club on Fletcher Street, moving into newly constructed stables in 2019 after the filming of Concrete Cowboy, local news organization Billy Penn reported.

But another urban redevelopment plan threatens Fletcher Street Urban Riding Club once again. The empty lot across the street from the stables has served as a training and riding ground for the horses—and the set for many critical scenes in Concrete Cowboy. In a years-long land dispute that is referenced in the film, the Philadelphia Housing Authority (PHA) finally acquired the land for $1. PHA has since broken ground on the Fletcher Street pasture grounds where it plans to build affordable housing for seniors, leaving little space for approximately 30 horses stabled on Fletcher Street.

Saving the Black cowboy culture and community from extinction has become Ferrell’s life work—and he’s managed to find ways to keep the horses safe and the stables open. No matter what obstacles come his way, Ferrell says he has made it his life’s mission to keep the community alive.

The original version of this story misstated how many horses are housed on Fletcher Street. There are approximately 30 horses, not eight. 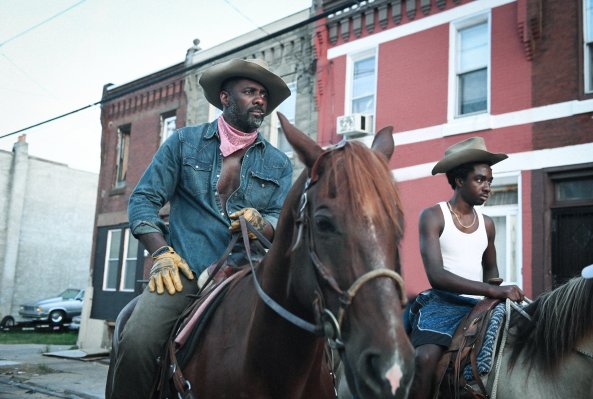 Idris Elba Brings a Regal Urban Cowboy to Life in Concrete Cowboy
Next Up: Editor's Pick