In a Break with Washington's Usual Posture, the CDC Director Makes an Emotional Plea

It’s sometimes easy to forget that the leaders who guide this country through its toughest moments aren’t steely caricatures. We take comfort in the hardened hagiography of FDR responding to Pearl Harbor, Ronald Reagan’s reflection on the Challenger’s crew that “slipped the surly bonds of earth to touch the face of God,” or George W. Bush’s return to the White House after a harrowing day of cat-and-mouse on Sept. 11, 2001.

So it was a bit of a jolt when Dr. Rochelle Walensky, the head of the Centers for Disease Control and Prevention, experienced an emotional hiccup at a press briefing yesterday when she warned the public that COVID-19 still presents a real danger. We are approaching 10 weeks of Joe Biden’s team laying out facts and science to the public about the COVID-19 pandemic and his Administration’s response. Biden will occasionally comment on the situation, but unlike his predecessor, Biden knows his training is in law and senatorial politics, not virology or public health. Biden doesn’t need the spotlight the way Donald Trump did and does, and his team’s regular updates have been crucial in spreading information.

But Walensky took about a minute of personal privilege to break from the charts and studies to offer up a warning. The former head of infectious diseases at Mass General and one of the country’s best experts on HIV/AIDS, Walensky understands both personally and professionally what everyone around her is going through more than a year into the pandemic. And she’s not exempt from the emotional toll, either. When she made her first comments after Biden appointed her, she showed a spot of emotion. When she got her vaccine, the same, as Vogue noted in its excellent profile of the former Harvard professor.

But it was her impromptu remarks yesterday that sent the warning like a rocket around Washington.

“I’m going to pause here, I’m going to lose the script and I’m going to reflect on the recurring feeling I have of impending doom,” Walensky said. “We have so much to look forward to. So much promise and potential of where we are and so much reason for hope. But right now I’m scared.”

For one of the most powerful doctors in the world to say such a chilling truth should leave us all thinking twice about if that trip to the corner store can’t wait. The U.S. is seeing an uptick in new cases, up 14% over the last two weeks. We’re still in far better shape than we were right after the December holidays. But news of a raft of vaccines is giving Americans a potentially false sense that we’ve rounded the bend, according to Walensky.

It was the way she said it that made her warning especially stark. “Doom” is one of those words with clear emotional connotation. It’s a corresponding emotion to how we scroll through terrible news on our phones right now. It’s only a degree between doomed and damned. And here was one of the smartest people working on coronavirus telling us doom is at our door.

“I’m speaking today not necessarily as your CDC director, and not only as your CDC director, but as a wife, as a mother, as a daughter, to ask you to just please hold on a little while longer,” she said. “I so badly want to be done, I know you all so badly want to be done, we’re just almost there. But not quite yet. And so, I’m asking you to just hold on a little longer, to get vaccinated when you can, so that all of those people that we all love will still be here when this pandemic ends.”

In a turn that few Americans can deploy with such effect, Walensky spoke of her own commute to Mass General. “I know what it’s like to pull up to your hospital every day and see the extra morgue sitting outside,” she said.

I will leave it to others to address how vulnerability is seen as strength when men find it and as weakness when women show it. Right-wing media are accusing Walensky of hyping fear and misstating science, but perhaps this is a moment when we should be celebrating the fact that at least the CDC head isn’t being subjected to the sexist attacks that have dogged female experts for decades.

The warning came as plainly as it could have. Doom is at the doorstep and it’s on us to keep it from coming inside. The fact the voice rendering the warning belonged to a woman, or carried emotion, does not change the velocity with which this pandemic could be ricocheting around our communities again. The fact temporary morgues have parking permits at hospitals alone should be sufficient. 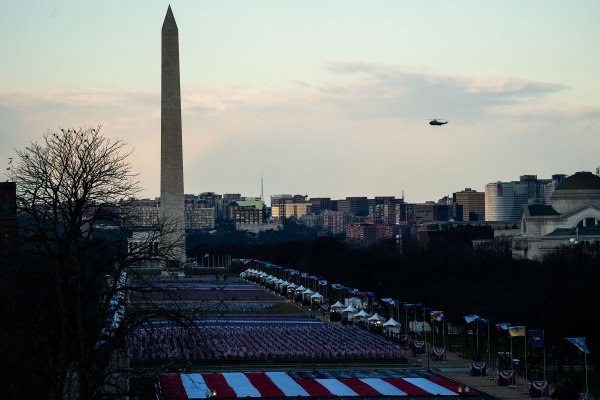 Trump Is Gone, But He’s Still Energizing The Resistance
Next Up: Editor's Pick