When Barack Obama strode to the front of the Rev. Dr. Martin Luther King Jr.’s one-time church in Atlanta to eulogize Civil Rights icon and Congressman John Lewis, few expected the take-away to be his call for changes to arcane Senate procedures. But when the histories of Civil Rights in the twenty-first century are written, the former President’s comments on Thursday may well be a watershed moment.

With his signature clipped cadence and sense of purpose, Obama used his globally televised remarks to call for an end to a procedural hurdle in the U.S. Senate that gives the body’s political minority outsized power to derail legislation. In his unexpected call to end the filibuster — a trick requiring a 60-vote supermajority to allow anything of consequence to proceed in the Senate — Obama became the most prominent Democrat yet to lend support to a procedural change that could reshape Congress’ routine that, to this point, is designed to stymie fast action.

During his eulogy of Lewis, Obama likened the filibuster to a “Jim Crow relic” used to derail important legislation like a voting rights renewal and statehood for the District of Columbia. Obama lamented how a handful of holdouts could impede movement — and often at the expense of Americans with the fewest rights and the least power.

In practical terms, Obama’s proposal would grease the path for a new slate of legislation that could remake the country with a strong liberal footprint when Democrats at some point reclaim a narrow majority. But it would also mark a step away from the Senate’s traditional role of steady and sober check on the quick-to-act House. And just as easily as it could move Democratic goals, it could be turned against them when Republicans inevitably reclaim that majority down the line.

Progressives and liberals have long sought to change the Senate’s slow-boil nature. While some work can be done with a bare 51-vote majority in the Senate, true action requires the support of 60 Senators. Absent that, the political minority can throw up roadblock after roadblock. In practice, the 60-vote requirement keeps most truly partisan things off the burner — or requires voters to endorse that prospect at the ballot box. So for Obama to suggest any effort to add slack to that process was a major move against comity in a Washington institution where Obama served before the White House.

Obama’s call didn’t come in a vacuum. Democrats are increasingly optimistic that they can snatch the gavel from Senate Majority Leader Mitch McConnell’s grip come November. McConnell’s fellow Republicans are on defense in a number of states, and McConnell is running his own well-funded re-election fight at home in Kentucky. President Donald Trump’s handling of the coronavirus pandemic and ensuing economic meltdown are offering scant coattails to GOP candidates. Presumptive Democratic nominee Joe Biden is riding high in the polls in swing states, which would eliminate the fail-safe of Vice President Mike Pence as a Senate tie-breaker in Republicans’ favor.

Even so, Democrats are nowhere near a map that would give them a 60-vote majority required to legislate with the filibuster in place. Which is why Obama’s remarks laid out a practical answer to what may be the new political reality in Washington next year: a Democratic House, a narrow Democratic Senate and a Biden White House looking to remedy the last four years. Without filibuster reform, it sure looks like inertia would be the true victor. 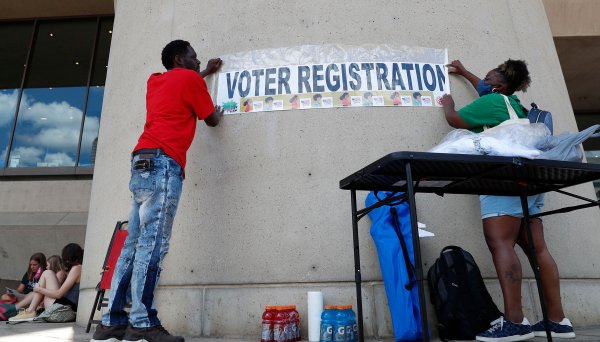