Polls show that most Americans oppose discrimination against LGBT people, and many believe that it’s already illegal. But federal laws don’t ban discrimination based on sexual orientation and gender identity the way they do regarding sex and religion. And the odds of Congress changing that in the immediate future are slim.

While courts and federal agencies have found some protections for gay and transgender Americans under existing statutes, efforts to pass a law that explicitly makes it illegal to deny them an apartment or fire them from a job have faltered.

LGBT rights advocates have been pushing to pass such laws for decades, starting long before their successful fights to legalize same-sex marriage and allow gay people to serve openly in the military. And in March, lawmakers from both chambers of Congress launched yet another attempt, introducing the Equality Act of 2019, a sweeping measure that would ban discrimination in areas ranging from housing to public accommodations (a realm that includes public bathrooms as well as bakeries, two areas of recent contention).

In the past, such bills have faced opposition based on the notion that being gay is immoral and a choice. And, though public attitudes toward gay people have radically shifted since the first bill of this kind was introduced in the 1970s, transgender rights have recently ascended as an area of controversy between the right and left.

Past years saw arguments that it would be easier to pass a bill focused only on protecting gay, lesbian and bisexual people. But advocacy groups and lawmakers have chosen to fight for a more comprehensive bill that covers all LGBT people. The strategy for the last decade has been “all of us or none of us,” says Mara Keisling, executive director of the National Center for Transgender Equality.

Though advocates believe the Equality Act will pass the Democratic-controlled House, they don’t have high hopes that it will be brought up for a vote in the Republican-controlled Senate. And several efforts by the Trump Administration, such as pushing to ban transgender people from serving openly in the military, lend doubt to whether the President would sign it.

The first version of the Equality Act was introduced in 1974, during a productive time for civil rights but a fraught time for gay Americans. “America didn’t even know gay people,” says Keisling. And the word transgender was hardly in use. The bill, which covered only sexual orientation, didn’t get a hearing for six years and faced opposition once it did, including allegations that being gay was an “abomination.”

Twenty years later, the bill had been introduced repeatedly but failed to become law. So legislators decided to try a more tailored approach focused on the workplace, introducing the Employment Non-Discrimination Act, or ENDA, in 1994. That measure still faced objections based on the notion that being gay was an objectionable “lifestyle,” as well as allegations that the protections amounted to special treatment.

“For many opponents, there’s a slippery slope that begins with anti-discrimination law and ends up with affirmative action,” explains Marc Stein, a historian specializing in LGBT issues at San Francisco State University.

From 1994 until 2005, lawmakers introduced what Keisling describes as “non-inclusive ENDA,” meaning that it did not protect people on the basis of gender identity. This was a sticking point among movement groups and lawmakers from the outset, as some asserted that a narrower bill would be easier to pass.

In 2007, Democratic Congressman Barney Frank, an openly gay lawmaker and a hero of the gay rights movement, introduced a bill that, for the first time, included gender identity as well as sexual orientation.

But after a contentious hearing involving debate about bathrooms and dress codes — and a whip count that apparently showed there weren’t enough votes to pass the bill — he switched course and introduced another one covering only sexual orientation, subsequently arguing that “something [was] better than nothing.” Many advocacy groups expressed outrage. Some scrambled on what position to take. Democrats split. As Keisling recalls, “all hell broke loose.” Neither bill became law. But from that point on, she says, the consensus was that equality must be equality for all.

In the immediate aftermath, that decision helped push the fight for an anti-discrimination law further down Democrats’ list of priorities.

When Democrats swept the White House, Senate and House of Representatives in 2008, advocates had a rare window to enact legislation. It was the first time they had controlled all three since 1994. David Stacy, head of government affairs for the Human Rights Campaign, a major LGBT rights group, says there were lingering doubts about being able to pass a version of ENDA that included gender identity. The clearer path, he says, was for Democrats to pursue the repeal of “Don’t Ask, Don’t Tell,” the law banning the open service of gays and lesbians in the military.

Stacy says that while the votes were in question then, “we have the votes today.” He points out that a version of ENDA that included both sexual orientation and gender identity passed the Senate with bipartisan support — including “yes” votes from 10 Republican senators — in 2013. But Republican leaders, at that time and since, have been loathe to bring up any bills focused on advancing LGBT rights.

The nature of ‘freedom’

Even if the Equality Act passed the House and Senate Majority Leader Mitch McConnell could be persuaded to bring the bill up for a vote in the Republican-controlled Senate, the measure would likely face contentious hearings.

As transgender Americans have become more visible, that attention has helped rally support for the community. A recent survey from non-partisan research organization PRRI found that 69% of Americans are in favor of laws that protect all LGBT people from discrimination, including a majority in every state.

But that visibility has also made them a target, advocates say. In recent years “there’s been a tendency on the part of conservative thought leaders to scapegoat transgender people as everything they dislike about contemporary society and liberalism,” says Shannon Minter, the legal director of the National Center for Lesbian Rights.

During a recent debate in a House committee about the reauthorization of the Violence Against Women Act, Republicans focused on trying to remove provisions that had been added to protect transgender people, such as a measure that could require prisons to house transgender individuals in facilities that match their gender identity. One lawmaker made an argument describing transgender women as “biological males,” a preview of debate that will likely accompany the consideration of the Equality Act in Congress.

In recent years, arguments about religious freedom have been also levied at attempts to shore up protections for LGBT people. The Trump Administration, for example, sided with a Colorado baker who refused to make a cake for a same-sex wedding because he felt the act violated his religious beliefs. Stein, the San Francisco State University professor, notes that while issues like same-sex marriage and military reform primarily targeted “discrimination” by the government, bills like the Equality Act have implications for businesses and corporations everywhere.

A long list of companies has come out in support of the measure, arguing that any discrimination is bad for business. But the perceived clash of rights has also proved a rallying cry for the socially conservative base.

‘The sky has not fallen’

In past decades, critics of non-discrimination bills also made the argument that protections for LGBT people are an “unnecessary” solution in search of a problem, likely to engender nothing but frivolous lawsuits. LGBT rights groups countered by releasing studies that attempt to show the extent of discrimination that people face. Among the most vulnerable are transgender people. One survey found that 30% reported mistreatment at the workplace, ranging from verbal harassment to being fired because of their gender identity.

Though no federal law explicitly bans firing a transgender woman because she is transgender, there are avenues of recourse. Twenty-one states have laws that ban discrimination against LGBT in employment and housing; 20 ban it in public accommodations as well. Agencies like the Equal Employment Opportunity Commission have also taken the position that such treatment is illegal under bans on sex discrimination. But courts have split on the issue of exactly what “sex” means in federal law, and the Supreme Court has yet to resolve the debate.

The fact that a patchwork of protections exists makes it both easier and harder to argue that the Equality Act must pass, says HRC’s Stacy. On the one hand, it makes messaging ” a little more complicated” around why it is necessary, even though the bill would bring sprawling legal changes. “On the other hand, the fact that these protections have existed and the sky has not fallen is an incredibly strong argument,” he says.

Though polls show that the majority of Americans oppose discrimination, Stein questions how accurate those numbers are — how people really feel once the debate starts touching on issues like identity politics, religious minorities, feminism and freedom.

“People may say that when asked in very general terms,” he writes in an email, “but if asked in more specific terms, I’m not sure that it’s true.” 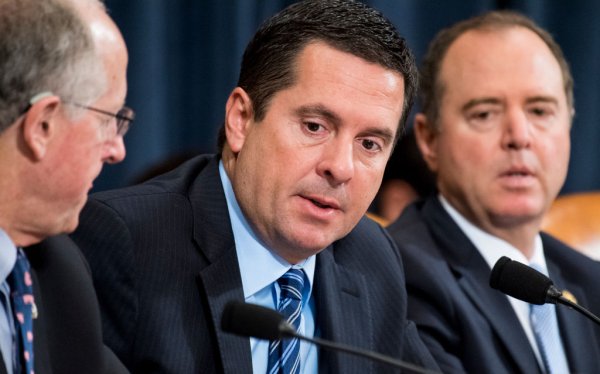 Nunes' 2010 Comments Surface Amid Defamation Suit
Next Up: Editor's Pick