My White Adoptive Parents Struggled to See Me as Korean. Would They Have Understood My Anger at the Rise in Anti-Asian Violence?

An attendee of a vigil kneels in front of a candle and flowers in memory of those who were killed in the shooting in Atlanta, on March 20, 2021.
Stephen Zenner—SOPA Images/Shutterstock
Ideas
By Nicole Chung
Nicole Chung is the author of the memoir All You Can Ever Know

For the last year, and especially since the devastating Atlanta-area murders on March 16, many of my Asian American friends have been sharing deeply personal, painful stories of talking with their parents and elders, pleading with them to take care, being exhorted to be careful in turn. As an adoptee, I don’t really have Asian elders in my family—or many elders at all, since the deaths of my father, grandmother and mother. Yet I’ve found myself wondering: If my adoptive parents were alive, witnessing the spike in anti-Asian racism and violence in the U.S. and around the world—with Asian women the most common targets—would they be concerned about me? Would they understand why I cried when I told my own Korean American daughters about the spa shootings? Would I have reached out to them during this past hard, heavy week, or held back, uncertain of how to share my fear and rage as the only Asian in my white family?

My parents loved and would have done anything within their power for me. But one thing they struggled to do, at least fully and consistently, was to see and understand me as a Korean American woman. Acknowledging it flew in the face of everything “experts” had told them when they adopted me in the early 1980s—the adoption agency, the social worker, the judge had all maintained that it wouldn’t, shouldn’t matter. So we never talked explicitly about race when I was younger, even though I was usually the only Asian kid in every room; the closest they came were statements such as “we would have adopted you if you were Black, white or polka-dotted” and “we’re all the same on the inside.” Even after I grew up, I cannot recall having a single conversation with them about anti-Asian racism specifically. Not the “model minority” myth. Not perpetual-foreigner syndrome. Not the exotification and fetishization of Asian women. Not the history of American imperialism that is partially responsible for my birth family’s and my presence in this country.

Often, people who’ve read my memoir will note my white family’s “colorblind” approach and ask whether this led to me thinking of myself as white. My answer is always swift, unequivocal: No, I never thought I was white. I don’t think my adoptive parents thought of me as white either, nor do I believe they imagined their whiteness would extend to me through proxy or proximity, because they didn’t think much about their whiteness at all—one of the manifestations of white privilege is not having to think about it. But they did assume that I’d be protected from racism because the world would see me as they did—their child, no more, no less—and as my race was irrelevant to them, they could not imagine anyone else caring about it either.

I’ve lost track of how many times my relatives told me, “I just don’t think of you as Korean.” But from early childhood, I understood that other people certainly did: white adults called me an “Asian princess” or asked where I was from; white boys at school chanted racist songs at me; a white girl singled me out at recess and demanded to know whether my “Asian vagina” was different from hers. While my adoptive family saw me as almost raceless and therefore safe from racists, I lived every day from the age of 7, when I heard my first slur from a classmate, understanding that my Korean face made me hypervisible where we lived—and that it could also make me a target.

Since the start of the pandemic and the racist scapegoating that has persisted throughout, I’ve often thought of the many thousands of Asian American kids currently growing up in white families and white spaces. Our experiences are of course not interchangeable, but I know it can feel like a unique burden when you witness or experience racism in a kind of isolation, unable to retreat and process your rage or sorrow with people who also know what it’s like to live in an Asian body. When the constant labor of pointing out or educating others about the racism you face doesn’t necessarily stop at home. When, even within your own family, you might hear people stereotype or mock Asians, use Asian slurs. I wasn’t surprised to learn that Cherokee County Sheriff’s Office Capt. Jay Baker, who stated that the Atlanta shooter was having “a really bad day” and was found to have promoted racist T-shirts that read “COVID 19 IMPORTED VIRUS FROM CHY-NA” on his Facebook profile, has an adopted Vietnamese brother. The truth is that it is entirely possible to love and care for one Asian American—“your” Asian American—and not see other Asians as equally, fully human.

Before and after the 2016 election, I tried to explain to my parents how it felt to live and raise Korean American children, their grandchildren, in a country where so many racists seemed emboldened by Donald Trump’s lies and attacks. I remember pleading with them more than once: “I need you to hear me and believe that this racism is real, and that we experience it.” I cannot say we found precisely the common ground I wanted, but at times I felt we were moving closer to it. Over the years, I’ve talked with so many other transracial adoptees who, like me, have undertaken the task of asking, sometimes begging our adoptive relatives to acknowledge our experiences; to stand with us; to challenge the racism endemic in our society as well as our own families and communities. Now, in this moment, I hope that every white parent of an Asian child is paying attention to the rise in anti-Asian hate. I hope that white people with Asian family members recognize and internalize the fact that no amount of love, good intentions, assimilation or proximity to whiteness will protect their loved ones from racism. I hope that every parent is thinking about how they will talk about anti-Asian prejudice with their children.

It’s impossible to know what my own parents might have said about this wave of hatred and violence, part of a long history of anti-Asian racism. By the time the former president began calling COVID-19 “the Chinese virus,” by the time racists began shouting and tweeting (and spray-painting) the term “Kung Flu,” my father was gone and my mother’s cancer had spread, and the difficult conversations left to us were about our grief and how much we loved and missed one another. Like most everyone who has lost one parent, let alone two, I’ve had to accept that there are questions I’ll never get answers to, things we’ll never be able to settle. That my parents didn’t entirely understand or accept my racial reality will always be with me, part of my adoption story—but it’s not the most important through line of our story as a family, nor does it typically ascend to the forefront of my memories of them. They were, perhaps, vindicated in this: our love for each other was what mattered most, in the end.

Because of that love, which I’ve never doubted, my best guess is that they would have tried to follow when I drew a connection between the cresting anti-Asian hatred and the steady churn of dread and anger I’ve known over the last year. I think that the people who long tried to keep me safe would have asked me to be careful now; that the parents who never stopped worrying about me would have at least tried to understand my worry as the mother of Asian American children. At the same time, when I hear my mother’s voice in my head—as I still do, and have, nearly every day since she died in May—she is forever reminding me to trust myself, to know my value, to focus on what feels most important and life-giving and fulfilling. I know that the last thing either of my parents would have wanted was for me to despair, or live my life in fear. And so, for their sake and my own, I won’t. 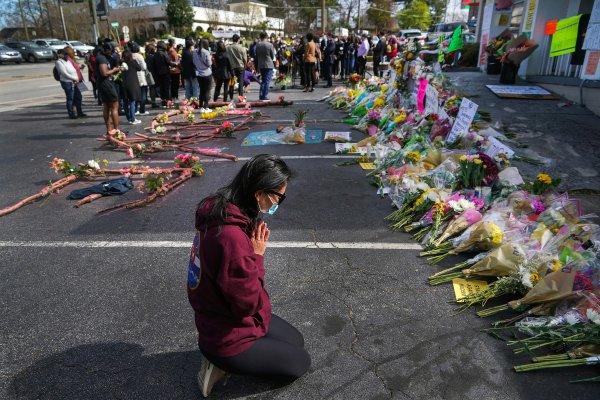