Hate Crimes Against Asian Americans Are on the Rise. Many Say More Policing Isn't the Answer

When Amanda Nguyen saw the video, she was horrified. In the Jan. 28 security footage, 84-year-old Vicha Ratanapakdee was shoved to the ground while taking his morning walk in San Francisco; just two days after the assault, he died. (Nineteen-year-old Antoine Watson has since been charged with and pleaded not guilty to murder and elder abuse.) It was one of several incidents of physical violence against Asian American elders in recent weeks across the U.S., but Nguyen had yet to see coverage by a major news outlet about the concerning increase in violence towards the Asian American and Pacific Islander community, following a year of xenophobic rhetoric and racist attacks amid the pandemic.

“I was mad, like blood boiling through my veins now, watching my community get slaughtered,” says Nguyen, a civil rights activist who was nominated for a Nobel Peace Prize for her work in advocating for sexual assault survivors. “How many more people need to be killed in order for the news outlets, especially mainstream ones, to think that we’re worthy of a story?”

In response, Nguyen made an Instagram video where she implored her viewers to speak out about Ratanapakdee’s death, as well as the assault of a 64-year-old Vietnamese grandmother who was assaulted and robbed in San Jose, Calif., and the attack on a 61-year-old Filipino man whose face was slashed with a box cutter on a New York City subway. Nguyen’s video went viral as more reports of violent attacks and robberies emerged, including one of a 91-year-old man who was caught on camera being thrown to the ground in Oakland Chinatown, where there have been upwards of 20 violent attacks and robberies reported since January.

Since the start of the pandemic last spring, Asian Americans have faced racist violence at a much higher rate than previous years. The NYPD reported that hate crimes motivated by anti-Asian sentiment jumped 1,900% in New York City in 2020. Stop AAPI Hate, a reporting database created at the beginning of the pandemic as a response to the increase in racial violence, received 2,808 reports of anti-Asian discrimination between March 19 and December 31, 2020. The violence has continued into 2021, and President Joe Biden signed an executive order denouncing anti-Asian discrimination shortly after taking office in January. While anti-Asian violence has taken place nationwide and particularly in major cities, the uptick in attacks in 2021 has been particularly focused in the Bay Area, especially in San Francisco and Oakland’s Chinatowns.

Read More: 10 Asian Americans Reflect on Racism During the Pandemic and the Need for Equality

Many attribute the 2020 uptick to the xenophobic rhetoric of Biden’s predecessor; former President Trump repeatedly referred to COVID-19 as “the China virus,” blaming the country for the pandemic. In doing so, Trump followed in a long American history of using diseases to justify anti-Asian xenophobia, one that dates back to the 19th and 20th centuries and has helped to shape perception of Asian Americans as “perpetual foreigners.”

“There’s a clear correlation between President Trump’s incendiary comments, his insistence on using the term ‘Chinese virus’ and the subsequent hate speech spread on social media and the hate violence directed towards us,” says Russell Jeung, a co-founder of Stop AAPI Hate and a professor of Asian American Studies at San Francisco State University. “It gives people license to attack us. The current spate of attacks on our elderly is part of how that rhetoric has impacted the broader population.”

Why the ‘model minority’ myth is harmful

Mabute-Louie cites the pervasiveness of the model minority myth as a large contributing factor to the current climate. That false idea, constructed during the Civil Rights era to stymie racial justice movements, suggests that Asian Americans are more successful than other ethnic minorities because of hard work, education and inherently law-abiding natures. “This contributes to erasing the very real interpersonal violence that we see happening in these videos, and that Asian Americans experience from the day-to-day, things that don’t get reported and the things that don’t get filmed.”

Read More: Asian Americans Are Still Caught in the Trap of the ‘Model Minority’ Stereotype

Because the model minority myth suggests upward mobility, it creates a fallacy that Asian Americans don’t experience struggle or racial discrimination, a stereotype that’s been bolstered by limited (and in some cases, flawed) media representation like the film Crazy Rich Asians and more recently, Netflix’s Bling Empire. In reality, the community is America’s most economically divided: a 2018 study by the Pew Research Center found that Asian Americans experience the largest income inequality gap as an ethnic and racial group in the U.S. and a 2016 report from NYC Mayor’s Office of Operations found that Asian immigrants have the highest poverty rates in the city.

Posters against racism towards Asian Americans, by artist Amanda Phingbodhipakkiya, are seen at the subway station at Barclays Center in Brooklyn, Jan. 1
STRF/STAR MAX/IPx

Why more policing isn’t the answer

High-profile Asian Americans have helped draw attention to the recent surge in hate crimes: actors Daniel Dae Kim and Daniel Wu shared the video of the 91-year-old man being pushed down in Oakland Chinatown on Twitter, offering a $25,000 reward to anyone who could provide “information leading to the arrest and conviction” of the attacker, who had also pushed down a 60-year-old man, as well as a 55-year-old woman, who was left unconscious from the attack.

“The skyrocketing number of hate crimes against Asian Americans continues to grow, despite our repeated pleas for help,” Kim wrote in the tweet, going on to reference a Chinese American man who was beaten to death in 1982. “The crimes ignored and even excused. Remember Vincent Chin.”

The Oakland police later charged 28-year-old Yahya Muslim with assault, battery and elder abuse; he was already in custody for unrelated charges when he was identified. As a result, Kim and Wu donated the $25,000 to community organizations aimed at stopping anti-Asian hate.

Kim’s tweet brought up mixed feelings for many in the AAPI community. On one hand, Kim identified a longtime grievance for many Asian Americans—that violence against them has often been dismissed and that their struggles and even their existence often feel invisible to others in this country. Kim’s reference to the 1982 murder of Chin was a poignant reminder of a hate crime that led to a major mobilization for Asian Americans in the Civil Rights discourse, creating a significant wave of Asian American activism and a memorable point of solidarity with Black racial justice organizers.

At the same time, however, Kim’s offer of a reward for identifying the person who attacked Asian American elders underscored another problem with addressing racial injustice in the U.S.: how to tackle anti-Asian violence without relying on law enforcement institutions that have historically targeted Black and brown communities. Many in the AAPI community were troubled by the actor’s social media post, given that the alleged attacker was a Black man. Kim Tran, a consultant and writer, voiced her disagreement with this tactic on Twitter.

“Listen, if you don’t understand why it’s problematic to offer 25k for information about a Black man in Oakland, I need you to stay off all the goddamned panels,” Tran wrote in a series of tweets. “This is the moment we need to ask ourselves, to what end? If it was for an accountability process, okay, but I highly doubt that. Lastly, this looks a lot like a bounty on a Black person funded by Asian American celebrities. I have major, major doubts.”

Tran’s tweets reflected a larger sentiment online from many Asian Americans that keeping their community safe should not mean turning to increased policing—especially in the wake of a national reckoning this summer with systemic police brutality and the disproportionate harm it causes Black and brown communities, who often share space with Asian Americans.

That perspective is informed by a long and complicated history between the Asian American and Black communities in the U.S., which has included both solidarity—like the Third World Liberation Front, which helped create equal education opportunities for students of color and the creation of ethnic studies—as well as interracial conflict. Mabute-Louie makes the case that fostering anti-Black sentiment or focusing on interracial conflict in this moment takes away from recognizing that racism is a result of white supremacy.

“If the bigger problem is anti-Asian sentiment, putting someone in jail doesn’t solve that problem,” she says, calling for an approach that allows perpetrators to be both held accountable and encouraged to change. “All of us really need to do work into our communities to unlearn these harmful narratives about each other.”

Many community leaders have therefore taken a vocal stance on interracial solidarity. Oakland City Council president Nikki Fortunato Bas called for solidarity while condemning pitting communities of color against each other or increasing the police presence.

Others have turned to local organizations to show their support for the community during this painful time. For example, the Black Bay Area, an anti-gentrification group, raised funds to support Asian-led support organizations in San Francisco and Oakland. And the Anti-Police Terror Project, the Ella Baker Center for Human Rights and the Asian Pacific Environmental Network have joined forces on initiatives like recommending that people show their support by frequenting Chinatowns and their merchants and showing solidarity by wearing yellow. For the Ella Baker Center for Human Rights, supporting the AAPI community has been part of a longstanding relationship with the Asian Pacific Environmental Network, with whom they’ve worked with for over a decade to provide mutual aid to both communities in Oakland—an example of solidarity that’s long existed, but isn’t always highlighted.

“The reality of Black and Asian solidarity has a long history inside the Bay Area,” says Zach Norris, the executive director of the Ella Baker Center. “We want to remind folks of that and really look to the solutions that we think will be helpful in healing harm and moving forward in a way where all communities can thrive.”

Jeung, the Stop AAPI Hate co-founder, says community efforts and solidarity are the only ways to curb racist attacks. He participated in a racial peace rally in San Francisco and Oakland and is helping to organize strolls through Chinatown, where locals walk to provide a sense of safety and security for merchants and senior citizens,

“We know we need that this is an issue that affects all our communities, and we have to break the cycle of violence,” Jeung says. “And we’re calling not necessarily for more punitive measures but restorative justice models that break the cycle of violence, ethnic studies to teach people about racial solidarity, community mediation efforts to not only hold people accountable, but to work together to resolve issues.” 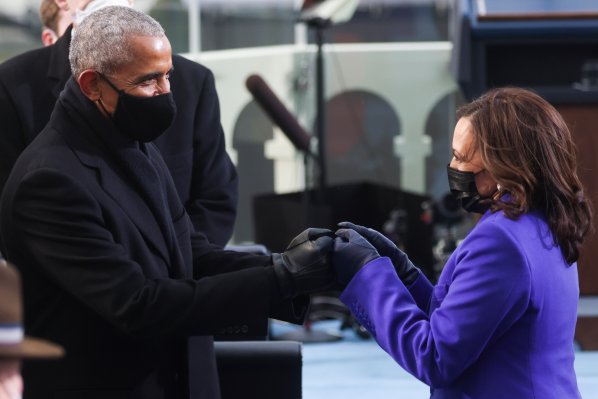 Word to the President: To Help Black America, Focus on Race
Next Up: Editor's Pick