Why Europe's AstraZeneca Vaccine Woes Are a Problem for the World

17 March 2021, Bavaria, Fürstenfeldbruck: An employee of the Red Cross draws up a syringe with Pfizer BioNTech vaccine in the laboratory of the Coronavirus Vaccination Center Fürstenfeldbruck. Vaccinations can continue at the vaccination centre, now that second vaccinations with Pfizer-BioNTech are planned in particular.
Peter Kneffel/dpa
Ideas
By Ian Bremmer
Bremmer is a foreign affairs columnist and editor-at-large at TIME. He is the president of Eurasia Group, a political-risk consultancy, and GZERO Media, a company dedicated to providing intelligent and engaging coverage of international affairs. He teaches applied geopolitics at Columbia University’s School of International and Public Affairs and his most recent book is The Power of Crisis

Plenty of drama in Europe this past week as the AstraZeneca vaccine—a crucial component of the continent’s vaccination plans—was paused by more than a dozen European countries after a few reports emerged of blood clots in people after receiving the vaccine. Europe’s FDA equivalent, the European Medicines Agency (EMA), says that it is still “safe and effective” and “its benefits… outweigh the possible risks,” even if they are unable to completely rule out a link between the vaccine and a very rare clotting disorder. But it’s the vaccine politics that are the problem now, and no EMA ruling can overcome that. That will have ramifications for both Europe’s vaccination drive… and the rest of the world’s.

It is no secret that Europe’s stumbling vaccination efforts leave much to be desired. Even before this week’s headlines, Europe was struggling to procure enough vaccines to jab Europeans at a quick enough clip to avoid a third pandemic wave, while Paris and parts of France lockdown again this past weekend.

While AstraZeneca was an important component of Europe’s vaccination plans, it was not the be-all or end-all of those efforts—the efficacy rates were lower than its mRNA competitors like Pfizer and Moderna for the shots to be many people’s first choice, exacerbated by the fact that disparate clinical trials of the AstraZeneca vaccine were conducted in such a way as to elicit a fair amount of criticism. Recent studies have also shown that AstraZeneca is less effective than other vaccines against the new variants of the virus. But the European Union—which had leaned on member states to let Brussels lead vaccine procurement lest individual countries began competing for vaccine supplies—made a big bet on AstraZeneca. And as the EMA just confirmed again, the shot is indeed effective.

Of course, Europe’s big bet on AstraZeneca came before AstraZeneca informed Brussels that it would be unable to meet its promised delivery targets of 270 million doses in the first six months of 2021, and would be delivering closer to 100 million over that same time horizon. Then reports began to surface of blood clots being found in people who had been administered the vaccine. Statistically speaking, when vaccinating so many people so quickly, problems like this are bound to crop up—people break their leg after receiving AstraZeneca too, but it doesn’t mean that there’s a causal link—and the incidence of blood clots among the 11 million people that have gotten the AstraZeneca shot in the U.K. was not any higher than in the broader population.

But vaccine politics in the midst of a pandemic are particularly sensitive and some countries paused AstraZeneca out of an abundance of caution in order not to further undermine confidence of the vaccine. Which is ironic, because other countries then followed suit… which in turn undermined confidence of the vaccine. On the other hand, once the reports surfaced, doing nothing risked undermining confidence in the AstraZeneca vaccine just as much, if not more. And now there’s no going back.

The result has been a crisis of confidence. That means a slowdown of Europe’s vaccine rollout; even if countries resume vaccinating with AstraZeneca immediately, the headlines has likely increased vaccine hesitancy even further, not just of AstraZeneca but for others as well. That’s because when it comes to vaccines—any vaccine—100% certainty is never on the table. Up until now, the world had managed to avoid any alarming vaccine news seizing headlines. It’s one thing for people to prefer one vaccine to another, another for one to be actively feared. And Europe has little choice but to wade back into the AstraZeneca vaccine waters given their lack of other options at present.

And the fallout goes beyond just the vaccines themselves. The EMA, which has approved the AstraZeneca vaccine and confirmed it as safe prior to this week’s developments, is stuck. Given that the blood clot fears cropped up just on anecdotal evidence, skepticism of the vaccine is likely to persist no matter what scientists say and likely to deepen with the inevitability of more such instances coming to the fore. With each additional headline, the institution’s reputation is dinged again—rightly or wrongly. That’s a bad place to be in the midst of a pandemic. It also doesn’t help bolster confidence in the E.U. as a bureaucratic institution—for years, the technocrats in Brussels were regarded as slow and plodding, but competent. The longer the bloc struggles with the vaccine rollout, the more seriously the E.U.’s competency gets called into question, even if individual member states themselves deserve blame for holding up the rollouts as they fought over quantities and pricing.

Given all that, Brussels is in damage-control (again), and the early signs point to vaccine nationalism as the answer Brussels is grasping at. For all their struggles with vaccine rollout, Europe had been good about allowing vaccines to leave its shores even while it itself struggled with getting jabs in arms, sending out more than 40 million vaccines abroad. High-profile snubs of countries like Australia aside, Europe’s vaccine generosity has been especially pronounced compared to countries like the U.S., where there was virtually no vaccine exports slated before the summer (though the U.S. has recently taken the criticism to heart and agreed to send some AstraZeneca vaccines to Mexico and Canada). That’s also true compared to the UK, which despite having no formal export ban has secured priority delivery from AstraZeneca as part of its contract, one reason for the repeated surprise cuts to the E.U. supply (in addition to the manufacturing delays in European plants), which now run into the tens of millions of doses that have failed to arrive since the start of the year. In contrast, 10 million doses sent to the U.K. came from the E.U.

Decreasing interest in the AstraZeneca vaccine could increase pressure on the E.U. to restrict more exports on its other vaccines as well: A lot of vaccines—Pfizer, J&J, Novavax, and others—are and will be produced in large quantities in E.U. countries. Put another way, vaccine nationalism out of Europe has serious impact on the global vaccination picture.

This week’s headlines make it seem as if AstraZeneca is just a problem for Europe. If only.

One Thing to Say About It at a Dinner Party:

Multiple other countries have also suspended the AstraZeneca vaccine based off of this news from Europe. Delaying the vaccine rollout globally means thousands more lives and livelihoods lost, not to mention billions of dollars for the global economy. It also means the inequality of the pandemic recovery process grows larger. If you were worried about AstraZeneca’s impact on inequality when it was just a vaccine with a lower efficacy rate being shipped to developing countries, combine that with stories floating about how not only do these vaccines not work as well, but possibly cause active harm… stories which are now harder to dismiss. Not good.

Another Thing to Say About It:

If we trust the science—and we should—this week’s AstraZeneca developments are just a combination of bad luck + early errors + a fatigued population verging on paranoia + Twitter + Russia vaccine disinformation on vaccines generally.

In other words, the pandemic has intertwined politics and science like never before in the 21st century. Sorry. 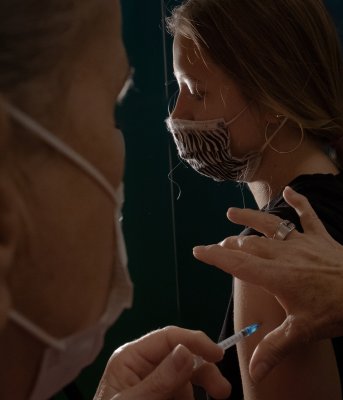