It’s the last thing public health officials want to see in the midst of a pandemic: more than two months after pharmaceutical giant AstraZeneca and Oxford University scientists released their COVID-19 vaccine, countries in Europe and elsewhere are pausing its use amid disconcerting reports that a small number of recipients have experienced blood clots, some of them fatal.

It’s not clear yet whether the blood clots are related to the vaccine or not. The World Health Organization says the benefits outweigh any potential risks, and on March 18, the European Medicines Agency, which oversees drugs and vaccines in Europe, came to the same conclusion after reviewing the reports. While the EMA determined that the vaccine was “safe and effective,” it did note that it would continue to monitor side effects.

Despite those reassurances, European countries including France, Germany, Italy and more have suspended vaccinations with the AstraZeneca shot. Venezuela, which has not yet authorized the AstraZeneca vaccine, now says it will not do so. “What we’re seeing is a domino effect,” says Dr. Anna Durbin, professor of international health at Johns Hopkins Bloomberg School of Public Health. “Nobody wants to be the country that didn’t stop [vaccinating] and then find out that the side effects are really related [to the vaccine].”

It’s expected that side effects will emerge after large numbers of people are immunized with a new vaccine. For public health officials, the key is to determine if these events would have occurred anyway if people hadn’t received the shot, or whether they are more intimately related to the vaccine. “When this occurs, it’s incumbent on public health agencies to quickly determine whether or not that vaccine adverse event is occurring more commonly in the vaccinated group than the unvaccinated group,” says Dr. Paul Offit, professor of pediatrics and director of the vaccine education center at Children’s Hospital of Philadelphia, and a member of the U.S. Food and Drug Administration’s vaccine advisory committee.

On March 14, AstraZeneca released a statement standing by its vaccine, noting that a “careful review” of data from the 17 million people vaccinated in the E.U. and U.K. with its shot so far “has shown no evidence of an increased risk of pulmonary embolism, deep vein thrombosis, (DVT) or thrombocytopenia, in any defined age group, gender, batch or in any particular country.” The company also noted that so far, among the millions vaccinated in the E.U. and U.K., just 15 have developed DVT, or blood clots in vein blood vessels, and 22 have developed clots in the lungs that originated elsewhere and traveled to pulmonary arteries. Those figures, AstraZeneca said, are much lower than the number of cases expected to occur naturally in that population. The company also said there were no issues relating to compromised batches of the shot.

AstraZeneca did not immediately respond to TIME’s requests for comment on the temporary halts of vaccination programs, or its plans for addressing skepticism about the safety of the shot.

Many countries pausing use of the AstraZeneca vaccine are dealing with rising COVID-19 cases and are just starting their vaccination programs, and the suspension will only hamper those efforts. Among E.U. countries, only 9% of the population has received at least one dose of the several two-dose vaccines currently available to them. Furthermore, Offit argues the stoppage may seed more doubt about the safety and efficacy of all coronavirus vaccines in the minds of an already skeptical public. “When you scare people, it’s hard to un-scare them,” he says. “I would argue that in the face of a pandemic, especially when [vaccination] is the only chance of being protected, the halts are not a conservative thing to do, but a radical thing to do.”

Offit points to data from AstraZeneca’s Phase 3 clinical trials in the U.K., Brazil, and South Africa, where no serious side effects were reported among more than 17,000 participants. Those trials showed that the vaccine was 67% efficacious in protecting people against COVID-19 disease after 14 days, and 82% efficacious after 12 weeks. Researchers did not report concerning incidents of blood clots or other side effects beyond those occurring at expected rates in the study population.

So why the uproar? It’s likely a combination of numerous factors, beginning with the early days of AstraZeneca’s late stage human testing. Public health experts found the data from the company’s Phase 3 trial—which were used to gain authorization in the U.K.—hard to interpret, since the researchers pooled several studies into one, and changes were made after the study began in both the doses people received and the timing of the shots. For example, mistakes in the doses of the vaccine led some participants to receive the planned two full doses, spaced one month apart, while others received a half dose and then a full dose. Some also had their doses spaced one month apart, while others ended up waiting three months for their second shot due to supply delays. On top of those changes, people in different countries received different placebos.

Whether any of these factors affects the vaccine’s safety isn’t clear, but they have led some to be wary of the shot. “The skepticism and increased scrutiny on the AstraZeneca vaccine has a lot to do with how early things were handled by both Oxford and the company in terms of how they reported things,” says Durbin. “The early stumbles out of the gate has affected the perception of the vaccine without a doubt.”

A U.S. study of the vaccine, which began in September, was completed in January (Durbin led one of the study sites at Johns Hopkins). Given the confusing interpretations of the U.K.-based trial results, a lot is riding on those findings. Dr. Ann Falsey, professor of medicine at the University of Rochester who was involved in designing the U.S. trial, hopes the results will clarify some of the confusion generated by the earlier U.K.-based study. “It was large, it was rigorously designed, ahead of time, and there were no changes that happened during the study,” she says. All participants were randomly assigned to either receive two full doses of the vaccine, one month apart, or a placebo. The company is currently analyzing the data and is expected to submit a request for FDA authorization soon.

Adding to the concerns is that AstraZeneca’s previous vaccine trial was put on hold last September after a report of a serious adverse event occurring in a study participant. The study was halted for three days in the U.K., and resumed there after the company determined the unexplained illness was not related to its vaccine. The study was resumed in Brazil and South Africa about a month later, while the U.S. trial restarted on Oct. 23.

AstraZeneca’s confusing trial results and the study’s temporary suspension led to a crisis of confidence that convinced governments around the world to hit the breaks on its vaccine when the blood clotting reports surfaced. “The reports do seem to have taken off more than the [side effect] reports from the other vaccines,” says Offit.

Still, Falsey says “there is no reason to panic.” “To judge the outcome now would be very premature,” she adds. “I do think the bulk of data shows the vaccine is very safe.”

If the blood clotting concerns were not enough, a new study shows the AstraZeneca vaccine was not effective in protecting people from a variant of the COVID-19 virus that originated in South Africa and is slowly gaining ground elsewhere. In the report, published in The New England Journal of Medicine, scientists in South Africa found that two doses of the AstraZeneca vaccine were about 10% efficacious in protecting people from getting sick from the new variant, known as B.1.351. There were no severe cases reported among the 2,000-plus study participants, but similar percentages of those who got the vaccine and those who received a placebo got sick. That suggests the AstraZeneca vaccine may not be as useful in areas where that particular variant is spreading.

If AstraZeneca’s shot stays on the sidelines for long, it could reshape the global battle against the pandemic. The company has committed to providing a large supply of its COVID-19 shot to underserved countries and those who can’t afford to purchase them through the COVAX program. The company has separately agreed to provide 3 billion doses to countries including Russia, India, South Korea, Japan, China, Latin America and Brazil. In these countries and elsewhere, convincing people that the AstraZeneca vaccine—as well as other COIVD-19 inoculations—is safe and effective will be critical to ensuring that the shots find their ways into arms, which is the only way to finally slow the virus and curb the pandemic. 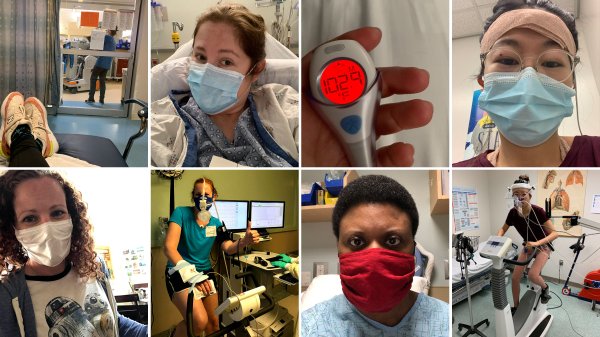 A Year with Long COVID, for Patients and Families
Next Up: Editor's Pick