Activists and citizens with temporary protected status (TPS) march along 16th Street toward the White House in a call for Congress and the Biden Administration to pass immigration reform legislation in Washington, DC, on February 23, 2021.
Drew Angerer—Getty Images
By Lissandra Villa

The House of Representatives passed two bills on immigration reform on Thursday that would provide a pathway to citizenship for millions of DREAMers, Temporary Protected Status holders, and farm workers. But they also served as an early indicator of Republicans’ limited appetite to work with Democrats on the highly polarized issue of immigration, raising the question of whether a more ambitious, comprehensive overhaul is possible in the current political climate.

The bills, Democrats’ first stab at passing any sort of immigration reform since the start of the Biden Administration and taking control of Congress, passed with modest Republican support. But they face an uncertain future in the Senate as immigration is back in the national spotlight due to the surge of unaccompanied migrant minors arriving at the southern U.S. border. The emerging crisis has simultaneously highlighted the need for comprehensive immigration reform and raised questions about whether more sweeping action is possible as Republicans seek to link the influx to Biden’s immigration agenda.

“I think we’re building momentum to what needs to happen, which is, complete overhaul of the system,” says California Rep. Linda Sanchez, a Democrat who sponsored a broader immigration reform package in the House backed by the Biden Administration. “I think they’re building blocks to the next bill.”

The American Dream and Promise Act and the Farm Workforce Modernization Act would grant DREAMers, some Temporary Protected Status holders, and farm workers the legal status they would need to pursue citizenship. Both bills are backed by the Congressional Hispanic Caucus.

Similar bills were passed in the Democrat-controlled House during the Trump Administration with Republican support before the Senate refused to take them up. This week, they saw comparable levels of GOP backing, with 30 Republicans voting with Democrats for the farm workforce bill and nine Republicans voting for The American Dream and Promise Act.

House Republican leadership whipped members against voting for The American Dream and Promise Act and urged a “no” vote on the Farm Workforce Modernization Act. Before the vote, GOP leadership complained that neither bill addressed the current crisis at the border, putting Republicans inclined to support one or both at odds with their party’s broader immigration message.

“It doesn’t help, that’s for sure,” says Rep. Brian Fitzpatrick of Pennsylvania, a Republican who voted for both bills in the last Congress, when asked whether the situation at the border made it harder for Republicans to support the proposals. Fitzpatrick again backed both bills during Thursday’s vote. “We need to control the border, and we need to fix the problem in a comprehensive manner.”

Washington Rep. Dan Newhouse, the Republican lead of the Farm Workforce Modernization Act who backed both of the measures in the Thursday vote, agreed the timing of the bills made it difficult for Republicans to get on board. “Immigration is always a difficult issue, and the crisis at the border certainly is not helping on the timing of any bill that has to do with anything in our immigration system,” he says.

This week, House Leader Kevin McCarthy led a delegation of a dozen other House Republicans to El Paso, where they visited U.S. Customs and Border Protection agents, migrant families, and a section of former President Donald Trump’s border wall. “Why would you do those bills without first doing border security? Why would you do that while you’re ignoring what’s happening on the border?” McCarthy said on Tuesday after he returned to Washington. “You’re only going to make it worse because you’re sending the wrong message.”

McCarthy also pointed to past immigration bills proposed by Republicans when they controlled the House, noting that no Democrats had supported them.

Rep. John Katko of New York, a Republican who is currently the ranking member of the House Committee on Homeland Security, was a co-sponsor of one of those bills — the failed Border Security and Immigration Reform Act of 2018. He says the process wasn’t bipartisan enough. “We didn’t include enough of the Democratic input. We’ve gotta do that if we’re going to get somewhere,” Katko says.

All six of the Republican lawmakers who supported the DREAMers bill in the last Congress and who are still in the House backed it once again, including Rep. Don Bacon of Nebraska. “I’ll probably take some heat because of the timing of it,” Bacon says. “But we’ve been saying that for a long time on DREAMers, and I just feel like we owe them some certainty.”

One of the other three Republican votes for that bill came from congressional newcomer, Florida Rep. María Elvira Salazar, who presented her own immigration plan on Wednesday that prioritizes border security. (Democrats control the chamber and therefore what legislation makes it onto the floor.) “I want to send the right message to the Democrats that I’m willing to work with them,” Salazar said, when asked why she voted for the Dream and Promise Act despite listing multiple issues she had with it.

For immigration advocates, who have waited years for the government to move forward with substantive immigration policy, Democrats’ control of both houses offers a rare—and perhaps fleeting—chance, though they will still need buy-in from Republicans in the Senate to bypass a 60-vote threshold. “The question is how many millions of undocumented immigrants can we legalize given the current composition of Congress?” says Frank Sharry of executive director of America’s Voice, an immigration advocacy group.

For now, that means being willing to start off with a piecemeal approach, such as the bills passed by the House this week. “We think that there is a really good chance that with the proper work and hopeful compromise, one of them will pass and that, if that happens, I think that will set the tone for further negotiations down the line for other bills,” says Rep. Ruben Gallego of Arizona, a Democrat.

Getting even one of the bills to pass in the Senate, however, could prove a challenge. When asked whether he thought the bills could pass in the Senate, Senator Dick Durbin, the majority whip says, “I don’t know. I hope we can put them together into an acceptable bipartisan package.” Earlier in the week, Durbin told reporters he thought a more comprehensive immigration package would be difficult to achieve.

In 2013, the last time there were earnest attempts at reaching a bipartisan deal on immigration reform, the Senate passed an immigration bill with substantial bipartisan support, but the then Republican-controlled House never took it up. Since then, the Trump Administration helped shift the Republican party further right on immigration, a trajectory reflected in the upper chamber.

“Eight years is a long time, and a lot has changed. Our country’s changed, the world has changed,” Senator Marco Rubio, one of two remaining Republican Senators of the immigration gang of eight that helped craft the 2013 legislation, told reporters this week. Rubio went on to say that immigration reform would have to be done in pieces rather than comprehensively.

Asked whether he thought that same bill could pass today, Senator Lindsey Graham, the other remaining gang of eight Republican Senator, says no. “You need to get the border under control if we’re going to have a discussion about immigration.” 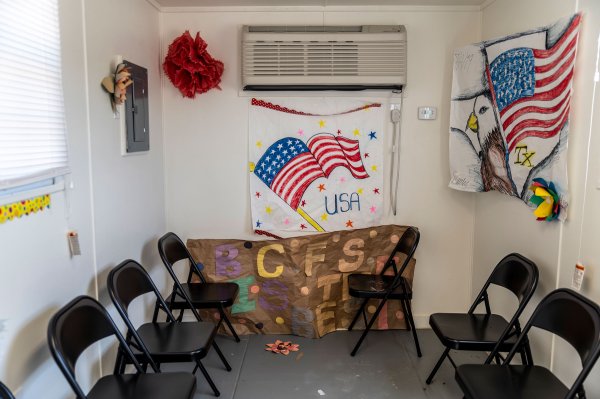 President Biden Must End Detention of Children and Families
Next Up: Editor's Pick