Mads Mikkelsen Can Do Anything. But He's Stuck in the Boring Oscar-Nominated Another Round

Pointless films have their place in the world: Not every movie has to clue us in to some murky corner of human nature, or teach us about worlds different from our own, or make us see our own lives in a fresh light. But even within that context, it’s hard to know what purpose Another Round, a half-comedy from the generally very serious Danish director Thomas Vinterberg, is supposed to serve. Most notably, Another Round—which is currently available to stream—is up for not one but two Academy Awards, Best International Feature and Best Achievement in Directing. Another Round isn’t badly directed; if anything, it’s rather skillfully put together, especially as a showcase for Mads Mikkelsen, a wondrous actor who can pretty much do no wrong. But Mikkelsen’s command over the whole enterprise notwithstanding, the question remains: Why does this movie even exist?

Mikkelsen plays a mousy, sad-looking schoolteacher, Martin, whose personality is so lackluster that his students, teenagers gearing up for graduation, have begun to complain about him: They’re worried that what they call his “indifference” will endanger their ability to pass their exams. (The logic of their argument is unclear—he’s not a negligent teacher, just a boring one—but the movie demands we accept their complaint as a serious problem.) At home, Martin’s two teenaged sons slouch in front of the TV, looking through him as if he were a specter. When Martin asks his attractive, blasé wife, Anika (Maria Bonnevie), if he’s become boring, she responds, her tone laced with pity masquerading as kindness, with the ego-shrinker of all time: “You’re not the same Martin I first met.”

This is very funny, in a dour, humorless way; not for nothing was Vinterberg one of the godfathers of Dogme 95, the rigid but hip set of filmmaking rules that caused a mild kerfuffle in the filmmaking world some 25 years ago. But even in the midst of our knowing, arty-farty laughter we can see that Martin is drowning in his own drabness. At a birthday celebration with his four closest male friends, all of whom teach at the school, birthday-boy Nikolaj (Magnus Millang) diagnoses his problem succinctly: “I think you lack self-confidence. And joy.”

But Nikolaj has a solution, not just for Martin but for all of them: Drinking on the job. There are rules: Imbibing in the morning is recommended—in fact, encouraged. But everyone must stop at eight in the evening (the regimen favored by Ernest Hemingway), and no one should consume enough to get knee-walking drunk, at least not at first. This manly experiment is intended to test the theory of real-life Norwegian psychiatrist Finn Skårderud, who has asserted that the normal blood alcohol level of human beings is just too low. The suggestion is that we’d all be better off if we went through life slightly drunk.

And guess what? It’s sort of true! At least for Martin, and at least at first: he miraculously becomes a much looser, livelier, cooler teacher. But the benefits reaped by his friends—especially phys ed teacher Tommy, played by Vinterberg regular Thomas Bo Larsen—are more questionable, and the stakes rise all around when Nikolaj decides to escalate the group’s Skårderudian experiment.

If Another Round had been presented as a farce, a trifle, it might, paradoxically enough, carry more weight. Good comedies have a way of cutting deep, maybe because they relax us just enough so that we let down our guard. But Another Round is both too serious and not serious enough. Its tone is fully adult and respectable; it feels like an experiment itself, a little rubber mallet designed to test our “Is it a comedy, or is it a drama?” reflexes. But as I watched, I felt nothing beyond the persistent, inquisitive tinniness of that hammer tap. On the one hand, it’s a relief that Another Round isn’t the bleak downer you think it’s going to be, a story about a man ruined by alcoholism. Its chief focus—beyond being a celebration of male friendship and communal inebriation—is the mild tragedy of middle-aged invisibility. Women often complain about that, but men feel it too.

We should be grateful, also, that this is one of Vinterberg’s more lighthearted affairs. There are no false accusations of child molestation and no dead dogs (as in The Hunt) and no scrappy heroine working overtime to advertise the modern-day relevance of Thomas Hardy (as in Vinterberg’s uneven adaptation of Far from the Madding Crowd). And at least we’ve got Mikkelsen: In addition to being Vinterberg’s key actor, the Danish star has played a James Bond villain and Hannibal Lecter, as well as a so-called accountant in a Rihanna video, but he can clearly do anything. Even here, as a character with no discernible personality, Mikkelsen casts a sympathetic, believable shadow. His Martin is a nowhere man of great distinction, stuck in a nowheresville of a movie. 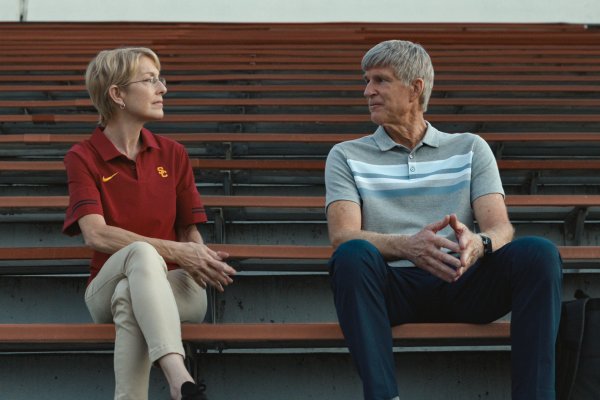 What to Know About Netflix’s Operation Varsity Blues—and the College Admissions Scandal That Inspired It
Next Up: Editor's Pick