In March 2019, 50 people, including actors Lori Loughlin and Felicity Huffman, were charged in the biggest college admissions scheme the Department of Justice has ever prosecuted. Parents spent anywhere from tens of thousands to millions of dollars to guarantee their children’s acceptance into colleges across the country. The $25 million scam was a media sensation, in large part due to its clear underlying message—that the wealthy operate according to a different rulebook in the U.S.—and the gratification many felt in seeing justice brought to those who thought their transgressions might go unnoticed.

The fraudulent scheme has been captured in news headlines since the story broke two years ago, and is now the subject of Netflix’s latest documentary, Operation Varsity Blues: The College Admissions Scandal. The film, which arrives on the streaming platform on March 17, focuses on the man at the center of the scandal, William “Rick” Singer, a basketball coach turned college counselor who helped parents cheat the college admissions process by bribing college coaches and test proctors.

Director Chris Smith tells TIME that because of the amount of media coverage the scandal had already received, it was important to him and his collaborator Jon Karmen, the filmmakers behind Netflix’s Fyre documentary, to find a new way to tell the story. “Jon went through the affidavit and found all the wiretap transcripts and from there, we thought that was an opportunity to do something that felt a little different,” Smith says. Operation Varsity Blues does that by recreating moments from the FBI’s wiretapped conversations between Singer and the many people he worked with and for. Actor Matthew Modine (Full Metal Jacket, Stranger Things) portrays Singer as he chats about test scores, money and all the logistics of the scheme with his clients over the phone.

These reenactments are interspersed throughout the movie alongside interviews, news clips and more. “What we were trying to do was explore aspects of the story that people might not be as familiar with,” Smith says. Here’s what to know about Smith’s approach to tackling the scandal, how he went beyond the headlines and where things stand now, as the case is still unfolding.

Putting the pieces together

As described in the film, Rick Singer got his start in the college coaching business in Sacramento in the 1990s after coaching basketball professionally. To Smith, one of the greatest challenges of the project was finding information on Singer, the mastermind behind the scheme. “The transcripts were not only valuable in terms of providing exposition and information in terms of how things unfolded, but they also gave you glimpses into his character,” Smith says.

Smith offers up an example: “When he’s talking to one of the parents, and says something like, ‘You know this isn’t TJ Maxx or Marshalls,’ I feel like there’s so much we can glean about who he is just from this interaction.” While Singer, along with many of the high-profile celebrities involved in the scandal, either declined or did not respond to requests to participate in the documentary, Smith and Karmen did secure two key participants: Patricia Logan, Singer’s former business associate (who was never involved in any of his schemes) and romantic interest who says she met Singer on an online dating site; and former Stanford sailing coach John Vandemoer.

Logan offered her own insights into Singer’s psyche, helping to paint a fuller portrait of the man. The documentary details how, in 2010, Singer wanted to create a reality television show about his business, and that he made an audition tape, which Logan saw. She described how she found the video of Singer to be “shocking”—for someone she found to be very private, she didn’t expect him to want to be so open with others. (The TV show was never greenlit.)

The other key participant was former Stanford sailing coach John Vandemoer. Of the 50 people charged in connection with the scam, Vandemoer was the first to be sentenced. The coach pled guilty to a single count of racketeering conspiracy and admitted to accepting payments to his sailing program in exchange for admitting two students to the university. In the film, Vandemoer’s story is explored in detail, from his first interactions with Singer to his eventual sentencing. Vandemoer was the only indicted person interviewed in the documentary—and he claimed to be largely unaware of what was going on while communicating with Singer. Though he pleaded guilty, the judge who sentenced Vandemoer said the coach was “probably the least culpable” of all involved in the scheme. (Vandemoer was sentenced to two years of supervised release.)

Going beyond the headlines

Bribing coaches to guarantee admission was one of Singer’s “side door” tactics. The film showcases how these opportunities came to be and the conversations Singer had about them. In some, for example, he asked parents to have their children pose in photographs playing a sport they were unfamiliar with, then turn around and use that sport to secure them admission to an elite university. Smith pored over the transcripts to seek out aspects of the story that went beyond what was apparent in the headlines. “There were a lot of new details and intricacies that I felt like were lost in the broader media coverage. To me, diving deeper into that was really interesting,” he says.

While Lori Loughlin and Felicity Huffman’s names dominated the news about the scandal, they are not at the center of the film. (Loughlin and her husband Mossimo Giannulli paid $500,000 to get their children admitted to the University of Southern California; Huffman paid $15,000 to doctor her daughter’s SAT score.)

The film does make mention of the Giannulli family—and also includes vlogs from Olivia Jade, their daughter and the YouTube star who posed as a crew recruit. There’s been plenty of discussion about whether Olivia Jade was aware of her parents’ actions. In addition to a photograph in which she is on an indoor rowing machine, she was also cc’d on at least one email involving her parents and Singer. Olivia Jade appeared on an episode of the Facebook Watch series Red Table Talk in December 2020, to discuss the scandal. “There was a lot that, when I was applying [to college], I was not fully aware of what was going on,” she said.

Smith was excited about the opportunity to combine multiple elements like the narrative reenactments along with the vlogs into something that felt cohesive. “There were all these disparate elements coming together,” he says. “We hoped that would be reflective of how we consume media today. Often, we’re watching TV, but we’re also on our computer and we’re looking things up as we’re watching.”

The current status of the fallout from the scandal

Due to COVID-19, the production of Varsity Blues was delayed from March 2020 to August. “But in that window, it was an unfolding story so there was new information that was presenting itself that we were able to incorporate into the version that we shot in August,” Smith says. “Time definitely helped us in terms of getting more information.” In those months, the government released a transcript that revealed a conversation between Olivia Jade’s father and a guidance counselor at her high school. The confrontation was then recreated in the documentary.

Though the production wrapped, the aftermath of the scandal has not. In October 2019, Felicity Huffman served 11 days of her two-week sentence. In a statement, Huffman wrote that “there are no excuses or justifications for my actions” and apologized to “the students who work hard every day to get into college.” More than a year later, Lori Loughlin completed her two-month prison sentence in December 2020, and her husband Mossimo Giannulli is currently serving his five months in prison (he is scheduled to be released on April 17). Though many of his clients have received their sentences, Singer, who pled guilty in March 2019, is still awaiting his. He could face up to 65 years in prison and a fine of more than $1 million.

While the case has received much attention, many caution that we shouldn’t expect the factors that led to it to disappear anytime soon. Nicole LaPorte, author of Guilty Admissions: The Bribes, Favors and Phonies Behind the College Cheating Scandal, wrote for TIME earlier this month about the white privilege at the center of the scandal. “Unless there are real changes at the college level in terms of what they’re asking of students and how many of them they’re letting in—if freshman class sizes were enlarged, for example, there would be less scarcity—the frantic desperation that led to Varsity Blues will live on,” LaPorte writes. “Even if Singer himself becomes a shadow.” 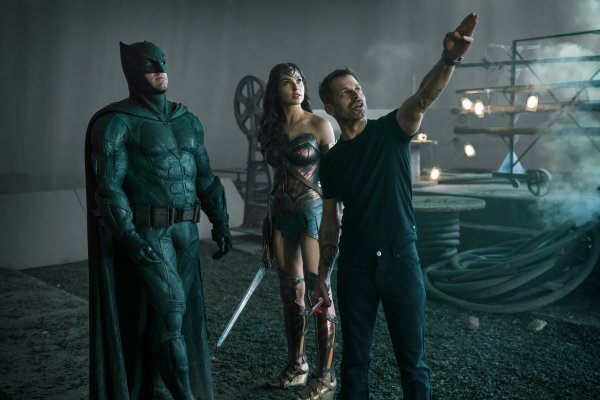 The Snyder Cut Is a Better Version of Justice League. But It Sets a Dangerous Precedent
Next Up: Editor's Pick