Jose Tejeda, a former U.S. Customs and Border Protection employee from Rio Grande City, Texas, faced a dilemma in November. He thought things had gone O.K. during Donald Trump’s presidency. He didn’t think Trump was fair on immigration, but thought he was good on the economy. Neither party had tried hard to win his vote, but he received a letter from Trump, in Spanish and in English, to accompany his stimulus check. “That was a point for Trump,” recalls Tejeda, who ultimately cast his ballot for Trump after voting for Hillary Clinton in 2016.

Trump performed significantly better than expected in 2020 with South Texas’ Latino voters like Tejeda. Zapata County, a patchwork of cattle ranches covered in prickly pear cactus that is nearly 95% Latino or Hispanic, went for Clinton by a 33-point margin in 2016. In November, Trump won it by 5 points, the first time since 1920, according to data provided by the Texas State Library and Archives Commission, that this rural county of 14,000 voted Republican in a presidential race. At least four other South Texas counties that are majority Hispanic and Latino—La Salle, Jim Wells, Kenedy and Kleberg—also flipped from Clinton to Trump. Laredo, an hour’s drive north of Zapata, had the biggest swing toward Trump of any U.S. metro area with a population exceeding 250,000, according to the New York Times.

More than four months later, Democrats are still trying to understand what went awry. How did Trump make such gains with one of the nation’s fastest-growing demographic groups despite his record of racist comments, his promised border wall and his “zero tolerance” policy that separated hundreds of families? The mystery is particularly confounding in Zapata County, an area so reliably blue it does not have a local Republican Party and saw just 38 votes cast in the 2020 GOP presidential primary. Except for the presidential race, Democrats won every other contest on the general election ballot. “Nobody really knows what happened in Texas,” says Representative Henry Cuellar, a nine-term Democrat as he sits outside the Zapata courthouse, which is part of his district.

The state party released a post­election report Feb. 22 that found it was hampered in part by the pandemic-driven shift from door-knocking to phone calls. (“We struggled to reach voters for whom we did not have phone numbers, who were disproportionately young, rural and folks of color,” the report stated.) Democrats also pointed to GOP success at turning out Trump-leaning voters, in addition to persuasion. “It appears that the Trump campaign and the Republicans did a really good job at gaining new voters,” says Rebecca Acuña, the Biden campaign’s state director in Texas, who notes that overall their campaign made gains in the state.

Voters and Democratic officials in South Texas offered several explanations for Trump’s success: a perception among some voters that Trump was better for the economy, especially oil and gas jobs; the stimulus checks; food boxes provided by his Administration’s Department of Agriculture. Some also say there was a lack of sustained outreach from Democrats who took Latino support for granted.

Republicans are working to capitalize. In Zapata, the GOP is organizing a county party. The state party chairman, Allen West, made several trips to South Texas ahead of the election and plans to hold the party’s quarterly meeting in Laredo in March as a symbol of its investment in the region. “We’ve opened the door,” says West, “and now we’ve got to open it up even further.”

Even in a normal election, you can only read so much into a single region, especially a sparsely populated one. Latino and Hispanic voters overall remain solidly Democratic, and were a crucial part of the coalition that delivered key states like Arizona and Nevada to Biden. But Democrats say this is why it’s critical to understand the Latino vote. “For the longest time, organizers and activists on the ground have been saying, ‘Republicans are coming, it’s getting more conservative,’ and it’s fallen on deaf ears,” says Jen Ramos, a member of the Texas State Democratic Executive Committee. “We can’t let that happen anymore.”—With reporting by Mariah Espada 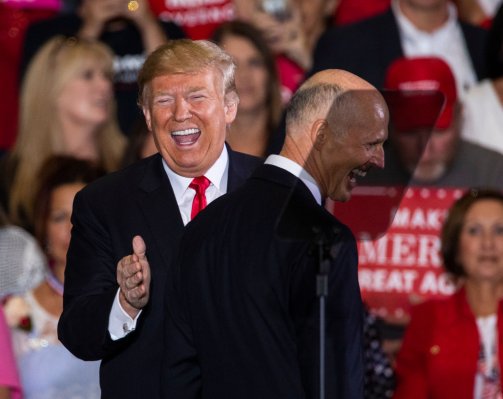 Republicans Want Trump to Help Retake Congress. Will He?
Next Up: Editor's Pick