Novavax Reports Its COVID-19 Vaccine is 96% Efficacious, Based on Phase 3 Trial Results

Novavax reported on March 11 that its COVID-19 vaccine is 96% efficacious in reducing mild, moderate or severe disease. The Maryland-based company joins the handful of manufacturers that have reported encouraging data on a COVID-19 vaccine; three, Pfizer-BioNTech, Moderna and Johnson & Johnson’s Janssen Pharmaceuticals, have already received emergency use authorization for their shots from the U.S. Food and Drug Administration.

Novavax revealed the final results of its Phase 3 human trials of NVX-CoV2373 in a press release; the findings have not been submitted for peer-review in a scientific journal yet. The company reported that overall, its vaccine was 96% efficacious in protecting people from mild, moderate or severe COVID-19 disease if they were infected with the original SARS-CoV-2 virus. The vaccine was slightly less efficacious, at 86%, in protecting against disease if people were infected with the B.1.1.7 strain of the virus, which is becoming dominant in the U.K., where the study was conducted. That gives the vaccine an overall efficacy of 89.7% against both the original and U.K. variants. By comparison, Pfizer-BioNTech’s vaccine is 95% efficacious against COVID-19 disease, Moderna’s is 94%, and Johnson & Johnson’s is 66%.

In an ongoing, Phase 2B study of the vaccine in South Africa, where a more worrisome variant is increasingly responsible for a growing share of new infections, Novavax’s shot is so far 55% efficacious in protecting against COVID-19 symptoms.

“I did not think it was possible to have a vaccine prevent 96% of any respiratory disease,” says Dr. Gregory Glenn, president of research and development at Novavax. “That’s outstanding, and I’m personally ecstatic. If you had asked me a year ago [to predict] the very best vaccine we could expect, I would have said 80% or 85% efficacy against any respiratory disease would be pretty amazing.”

Glenn joined the company just over a decade ago because he was intrigued by its vaccine strategy. In the case of COVID-19, that entails inserting the gene for a SARS-CoV-2 protein into an insect virus, and then infecting cells from an armyworm, the larval stage of a type of moth that infects cabbages, with this modified virus; those cells then act like a living copying machine, pumping out copies of the SARS-CoV-2 protein. That protein is then suspended in a molecular bubble, and injected into the body, where human immune cells recognize it as foreign and mount defenses against it. “It’s a beautiful system for making this [SARS-CoV-2] protein,” says Glenn. “It has to be made with absolute fidelity, especially for a viral respiratory disease, or it doesn’t work. And today we are announcing validation of that system.”

The strategy is designed to mimic as closely as possible the way viruses would activate the immune system during natural infection — that’s a potential advantage since such a response is, in theory, the one that is broadest and most complete—and likely, that provides the most protection. The company has used the technology in a flu vaccine, but some of the steps, including extracting the SARS-CoV-2 protein from the armyworm cells, were developed specifically for the COVID-19 vaccine.

Novavax’s Phase 3 trial included more than 15,000 people in the U.K. ranging in age from 18 to 84 years old, half of whom were randomly assigned to get the vaccine, which is given in two doses, and half of whom received placebos. Only five cases of severe COVID-19 were reported in the study, all among those getting the placebo.

While encouraged by the results, Glenn says his team, like those at the other vaccine manufacturers, are studying whether a booster dose might be needed to sustain the level of protection the study found. “Vaccine immunity doesn’t last forever,” he says. “I think the immune response is going to fall off after six to 12 months, and we’re going to need to boost.” Novavax is also studying a so-called bivalent vaccine, one targeted against both the original SARS-CoV-2 and the more worrisome South African variant. Boosting with this vaccine, Glenn says, would provide the broadest protection.

Glenn wouldn’t specify how much of a stockpile of doses the company has already manufactured, but says Novavax is in discussions with both U.K. and U.S. regulators about next steps to prepare for possible authorization. The company hopes to file for emergency use authorization in the U.S. during the next quarter, in the meanwhile, start to increase production with manufacturing partners in India, Spain, U.K., Korea and Japan.

Novavax’s vaccine can be stored at refrigerated temperatures, which could make it attractive for more vaccination sites that don’t have the freezer capabilities that the Pfizer-BioNTech and Moderna vaccines require. The company has committed to providing 1.1 billion doses of its vaccine to the global COVAX enterprise, run jointly by the World Health Organization, GAVI and the Coalition for Epidemic Preparedness Innovations. 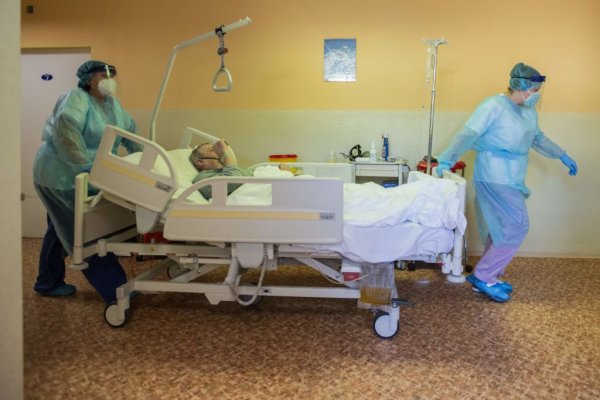 How Europe Lost Control of COVID-19
Next Up: Editor's Pick