12 Questions for Kevin Young, Poet and the New Director of the National Museum of African American History and Culture

Kevin Young, poet and the new director of the Smithsonian's National Museum of African American History and Culture.
Melanie Dunea
By Olivia B. Waxman

Americans have a lot of questions about how the U.S. arrived at this historic moment with millions protesting for racial justice in the streets and facing deep seated inequality, and Kevin Young, 50, has written 13 acclaimed books of poetry and prose that aim in part to help answer those questions. As the new director of the Smithsonian’s four-year-old National Museum of African American History and Culture in Washington, D.C., Young is in a key place to shape how the story of America gets told to a new generation primed to see it with fresh eyes. He envisions a museum where visitors can make sense of what happened in history and convey some idea of what it felt like to go through that history on an emotional level.

Previously, Young headed up the nation’s leading library for research on the history of African Americans and the African Diaspora, the New York Public Library’s Schomburg Center for Research in Black Culture. During his four-year tenure, the Harlem-based branch saw a 40% increase in attendance and acquired the manuscript of The Autobiography of Malcolm X, including an unpublished chapter, and the archives of luminaries like James Baldwin and Harry Belafonte. And as the The New Yorker‘s poetry editor since 2017 and one of the newest members of the American Academy of Arts and Letters, he is also an expert on how poems are another way of making sense of moments in the past and the present and how reading them, writing them, and sharing them, can help people in challenging times. Young’s own books have been finalists for top literary prizes like the National Book Award.

Young recently spoke to TIME over Zoom about the ways the museum is adapting to the COVID-era, the moments in American history and his own personal life that have shaped him, and how poetry and collard greens can help people heal in a grieving world.

TIME: You just did a move from New York to D.C., and you’re a self-proclaimed packrat. Any memorable debates over parting with something?

YOUNG: It was actually exciting to find some old notebooks I hadn’t seen in a bit, so it was more like a reunion.

Were you looking through notebooks and thinking, “I should finish that writing”?

I’m not foolish enough to look through the notebooks.

I went to the church where Linda Brown of Brown v. Board of Education, played piano and sang beautifully, so I was really aware of history all around. One of the things I moved to D.C. is a pew from that church. Having one reminds me of that upright feeling that that space provided, and history does that. The museum does the same thing. It puts a bone in the back and helps you think about this rich history of struggle and song.

How long before the museum takes that pew and displays it?

Well I think I just revealed it, so…it might be sooner than I think.

What parts of the museum move you the most?

The first-known photo of Harriet Tubman, you get to stare into her eyes and see her staring back at you fiercely. Before this job, my son and I waited in line to see Emmett Till’s glass-topped casket, and it occurred to me that we were re-enacting in some small way the experience that people had when they stood in line in Chicago to see Till’s body after his mother Mamie Till insisted it be shown after he was lynched in Mississippi in 1955. Having a young son and walking through that space was haunting. Nothing can reproduce that. I think a lot about witnessing, and the museum serves as a witness.

What are new plans or initiatives you’re working on at the museum?

We’re launching a new project I hope by the fall, which is the searchable museum, starting with the “slavery and freedom” exhibition. And it is taking some of those shows and exhibits that you can see in person and bringing them online, but in their own way. We’re also debuting an exhibition on Reconstruction in the fall.

Why do an exhibit on Reconstruction now?

Reconstruction thinks about questions of power, questions of who can vote, politics, but also this long history in the struggle for representation, and a lot of those questions are still with us. And one of the exciting things about the show, which is still underway, is going to be thinking about its legacies and connecting Reconstruction to present-day struggles and present-day issues. The museum not only gives us that history and scholarship and sense of the past by showing you just incredible things, but at the same time, [visitors are] experiencing firsthand those feelings. And the Reconstruction show is going to connect those two things— that intimate feeling of the past to the present and the present connections that we all have and the present questions of community that the museum does well.

Your 2020 anthology African American Poetry: 250 Years of Struggle & Song came out just in time for Amanda Gorman’s inauguration performance. Does she remind you of other poets in history?

There is a tradition of Black inaugural poets, whether it’s Maya Angelou or Elizabeth Alexander. Gorman is following many footsteps, but she’s also establishing her own. The power of words hasn’t gone away.

I finished the book last summer on Juneteenth in the midst of the protests of the murder of George Floyd and others, and I was struck by the way that the poets were already thinking about questions of violence and questions of resistance, but also questions of silence and speech. How do you sing in a time like this?—the ‘time like this’ being throughout time.

Have you found the pandemic a good time to be creative?

I’ve had close family members with COVID. It’s a time when just surviving is enough. But people are doing more than just surviving, and in terms of the African-American tradition, that isn’t unfamiliar. In struggle, we sing. I’ve returned to cooking, eating that food that sustained us for generations. A good pot of collard greens won’t cure everything, but it will cure a lot. Poetry does some of the same things.

What’s special about talking to you during the pandemic is you’ve written about grief and edited the anthology The Art of Losing, having lost your father. How has poetry helped you cope?

People have written to me a lot more in this time around The Art of Losing. Poetry can be a balm, but it can’t wipe away those feelings. It’s more like a companion. Sometimes it’s loud—in a good way—and distracts you, and sometimes it’s quiet and accompanies you.

Do you have advice for what to say to people who have lost someone?

Saying sorry sometimes can convey some of what is really hard to convey. What a poem can do that’s slightly different than what you might say is a poem can talk about the overwhelming sensation of grief in a detail. As the poetry editor of The New Yorker, I’m struck by the way poetry can name a little moment, a powerful feeling, in the smallest detail. It can mention nature and not mention grief, but be filled with that feeling. Finding that metaphor is really powerful and personal. I also think you don’t have to have the perfect words. Poetry I don’t think is the perfect word. It’s an attempt. And that’s all people need in those times. And sometimes what they need is a good hot meal. You can forget to eat, to do the things that take care of yourself in the pandemic. Slowing down can be really important, and a poem can help you do that. 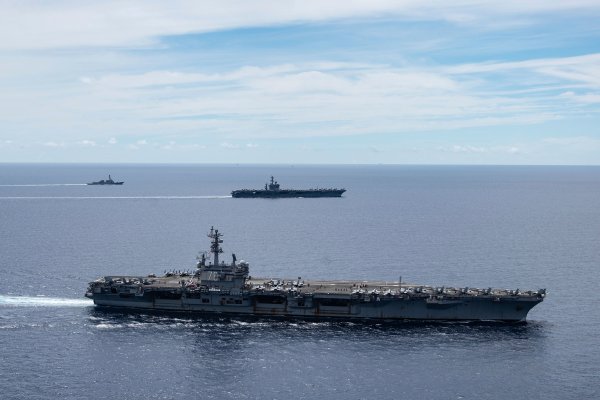 How We Could Sleepwalk Into a War With China
Next Up: Editor's Pick