The Core Message of Meghan and Harry’s Oprah Interview: Racism Drove Us From the Royal Family

There was one clear thread throughout Meghan Markle and Prince Harry’s dynamic interview with Oprah Winfrey on Sunday night: They believe they were driven from the royal family because of racism.

It was explicit in perhaps the most shocking allegation: that a member of the royal family came to Harry while Markle was pregnant with their son Archie with “concerns and conversations about how dark his skin might be when he was born.” Meghan is American and identifies as biracial.

But it was also implicit throughout the Duke and Duchess of Sussex’s account of why they fled the royal life—and Prince Harry’s home country—to live in a more private setting in Southern California. Markle said that she was shocked to learn that Archie, the first mixed-race great-grandchild of Queen Elizabeth II, would not be given the title of prince—and would also be denied security protection, something that concerned Markle given the racist harassment she and her family have received since becoming a royal.

Markle refuted the widely reported belief that it was she and Harry who didn’t want their son to have a title. She wasn’t concerned about whether her son would be called “Prince,” but was worried for his safety, she said. “They didn’t want him to be a prince or a princess. He wasn’t going to receive security,” she said. “We’re not saying don’t make him a prince, but if you’re saying the title is what’s going to affect the protection, our son needs to be safe.”

A history of racist attacks

Racism has long been one of the overarching issues that has shaped Markle’s time as a royal, even before she was an official member of the family. When the couple began dating in 2016, Prince Harry released a public statement via Kensington Palace in defense of Markle’s privacy and safety, where he called out racist and sexist press and social media—an action he repeated after their marriage and the birth of Archie.

Markle and Harry’s willingness to engage with the issue of race not only made the Oprah interview a must-watch broadcast, but also sent a clear message of their break with the mores of the monarchy, which is typically reticent when it comes to addressing race.

When Oprah pressed on which member of the royal family asked about Archie’s skin color, both Markle and Harry declined to give specifics. “That conversation, I am never going to share,” Harry said when pressed by Winfrey. “At the time, it was awkward, I was a bit shocked.”

Meghan: No protection from tabloid attacks

Markle has been subject to relentless (and often blatantly racist) tabloid coverage by the British media, a discomforting parallel to the rabid media interest in Harry’s mother, the late Princess Diana. Harry has noted on multiple occasions that his biggest fear is “history repeating itself,” something that he thinks could pose even greater danger to Markle because of her race.

The tabloid coverage also pitted Markle against her sister-in-law Kate Middleton—with a report emerging six months after Harry and Markle’s wedding that as a bride-to-be she made Middleton cry over dresses for the flower girls. But Markle said “the reverse was true”—though she insisted that she and the Duchess of Cambridge made amends.

Markle believes the Palace could have quashed the reports, but refused. She cited the incident to show how the intensely negative public scrutiny and lack of support led to an emotionally harrowing first year as a royal.

‘I just didn’t want to be alive anymore’

She revealed that she began having suicidal thoughts while she was pregnant with Archie in early 2019. “I just didn’t want to be alive anymore,” she said. “And that was a very clear and real and frightening constant thought.” When she approached royal staff for help with her mental health, she was refused.

Harry talked about his frustration from the lack of support from his family, in the face of racist attacks on Markle. “For us, for this union and the specifics around her race, there was an opportunity—many opportunities—for my family to show some public support,” he said. “And I guess one of the most telling parts and the saddest parts, I guess, was over 70 female members of Parliament, both Conservative and Labour, came out and called out the colonial undertones of articles and headlines written about Meghan. Yet no one from my family ever said anything. That hurts.”

He told Oprah that watching how Markle was treated opened his eyes to the larger impact of implicit bias, especially within the insular world where he grew up. He suggested one reason for his family’s silence was that they were scared of the U.K.’s tabloid newspapers.

A rift in the royal family

The ordeal has led to a rift within Harry’s family—which Harry spoke about candidly. He revealed that his father, Prince Charles, refused to take his calls after having just two conversations about the couple’s decision last year to step back from being senior members of the royal family. While Markle and Harry said they are still in contact with the Queen, Harry said also that he and his older brother Prince William are giving each other “space” for the time being.

Harry, the grandson of the Queen, is 6th in line to the throne—after his father, his brother, and his brother’s three children.

Time and again, in the interview, the Prince brought up his wife’s race when asked about her treatment by the Palace, his family and in the press.

“For the family, they very much have this mentality of, ‘This is just how it is, you can’t change it, we’ve all been through it,'” he said. “But what was different for me was the race element—it wasn’t just about her, it was about what she represents.”

After Oprah with Harry and Meghan aired on Sunday night in the U.S., many prominent Black American women sent messages of support to Markle on social media, including her good friend Serena Williams, who attended her 2018 wedding, activist Bernice King and inaugural poet Amanda Gorman.

“I know firsthand the sexism and racism institutions and the media use to vilify women and people of color to minimize us, to break us down, and demonize us,” Williams wrote on social media, later noting that she wanted Markle’s daughter, her own daughter, and others’ daughters “to live in a society driven by respect.” (In a moment of joy during the interview, the couple revealed that their second child, due this summer, will be a girl.)

King, the daughter of late civil rights leader Martin Luther King, Jr., called out the monarchy in a tweet, writing that “royalty is not a shield from the devastation and despair of racism,” while Gorman drew parallels between Markle and Diana.

Ahead of Sunday’s broadcast, Buckingham Palace said it was investigating allegations that Markle bullied staffers, based on a media report. In a statement, a spokesperson for Markle and Harry called the report “a calculated smear campaign based on misleading and harmful misinformation.”

This prompted many online to make the case that the palace had a double standard, pointing out that Prince Andrew has not been investigated for sexual abuse allegations leveled against him in the wake of his relationship with Jeffrey Epstein (Prince Andrew has denied the allegations).

It’s a sentiment that only increased following Markle’s claim that the royal family tried to silence her, but was willing to lie to protect other members.

“They were willing to lie to protect other members of the family, but they weren’t willing to tell the truth to protect me and my husband,” she said.

On March 9, Buckingham Palace released a statement on behalf of Queen Elizabeth II, addressing Markle and Harry’s interview with Winfrey.

“The whole family is saddened to learn the full extent of how challenging the last few years have been for Harry and Meghan,” the release read. “The issues raised, particularly that of race, are concerning. Whilst some recollections may vary, they are taken very seriously and will be addressed by the family privately. Harry, Meghan, and Archie will always be much loved family members.”

The statement was released less than 24 hours after the broadcast aired on March 8 in the U.K., following its premiere in the U.S. on March 7.

On March 11, Prince William was asked by a reporter during an appearance at a London school if the royal family is racist. “We are very much not a racist family,” William said in response. He also said that he had not spoken to Prince Harry since the Winfrey interview, but that he will do so.

If you or someone you know may be contemplating suicide, call the National Suicide Prevention Lifeline at 1-800-273-8255 or text HOME to 741741 to reach the Crisis Text Line. In emergencies, call 911 in the U.S., or seek care from a local hospital or mental health provider. In the U.K., call Samaritans at 116 123. 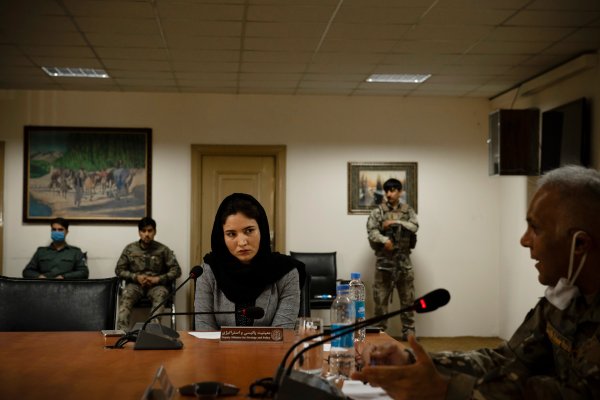