Coming 2 America Has Its Modest Charms, But It's Mostly a Reminder of How Great Its Predecessor Is

Before Black Panther’s mythical homeland of Wakanda had ever been committed to film, there was Zamunda, the similarly captivating made-up nation in John Landis’ 1988 Coming to America. Like Wakanda, the Zamunda of Coming to America is a country of great beauty, riches and achievement. And it has its own prince in Eddie Murphy’s Akeem, a young man who’s destined to wed a woman chosen for him by his parents—played with vibrating regality by James Earl Jones and Madge Sinclair—in preparation for his ascent to the throne. But Akeem doesn’t want a bland, obedient, pre-selected wife. He wants an equal, a woman of intelligence and wit. He thinks he can find this woman in America. So he and his loyal servant, Arsenio Hall’s Semmi, trek to the States—sophisticated naifs decked out in glorious robes—in search of Akeem’s true love. Where, exactly, is a prince most likely to find a future queen? Where else but…Queens.

Coming to America was an amiable modern fairytale, a delightful picture that might have seemed conventional in 1988 but looks better with age. It was also a big-budget Hollywood picture with a superb cast that was almost exclusively Black—a rarity in its time, and, until very recently, a rarity in ours too. So the timing is right for a sequel, and now we’ve got one: Coming 2 America, directed by Craig Brewer, is an update on what the royals of Zamunda have been up to in the past 30 years, a picture that hardly measures up to the earlier one but does, at least, offer some modest charms.

Akeem did find his queen in Queens, the generous and brainy Lisa (Shari Headley), and the two were wed in Zamunda at the end of the first film. Now they have three daughters of their own, the oldest of whom, Meeka (KiKi Layne), hopes to someday ascend the throne. The order of succession has significance, because King Jaffe Joffer (Jones) is elderly and ailing, and the disgruntled leader of the neighboring nation of Nextdooria—Wesley Snipes’ General Izzi—is stirring up trouble. What’s more, Zamundan law states that only a man can rule the country. Luckily—or not—it turns out that Akeem has an illegitimate son, whose existence comes as a surprise to him: apparently, one drunken night in New York, Semmi hooked him up with a fun date of whom he has no memory. That fun date, Mary (played by the anything-but-forgettable Leslie Jones), has raised her son Lavelle (Jermaine Fowler) on her own in Queens. Akeem and Semmi return to the site of their earlier adventure, so that Akeem can do right by this son he didn’t know he had, and also ensure the safety of his kingdom.

Coming 2 America is a generation-gap story and a fish-out-of-water story: the plot hinges on Akeem’s desire to mold his newfound son into an image he himself rejected. And when Lavelle and Mary arrive in Zamunda, they encounter the usual jaw-dropping sovereign amenities, which include royal bathers whose job entails more than just wielding a sponge and a pitcher of water. (Leslie Jones gets some of the movie’s best lines, including the most salacious ones, which she tosses off like casual firecrackers.)

Read More: John Amos Looks Back on 50 Years in Hollywood

But Coming 2 America has a clumsy gait; it doesn’t hold together with as much verve and style as the earlier film. That’s a disappointment, considering that the last film Brewer and Murphy made together, 2019’s Dolemite Is My Name—in which Murphy gave a marvelous performance as Blaxploitation wizard Rudy Ray Moore—was one of the most rapturous movies of that year. And even though Murphy is the star of this film, his presence is muted. As the younger Akeem, he radiated a starburst blend of curiosity and intelligence, a quality that went beyond what you’d expect of a story about a stranger in a new land. (The earlier movie was also the first time he’d played multiple roles, which he reprises to great effect here.) As the older Akeem, he still has that open-hearted radiance—as well as that superb gap-toothed smile, one of best Hollywood has ever given us, and one that he’s thankfully never sought to alter. Coming 2 America could use more of him. The jumbled plot focuses too much on the likable but not particularly interesting Lavelle—a problem that also diminishes Layne’s role as the smart but frustrated daughter who yearns to lead her country.

Yet at least Coming 2 America offers the comfort of spending some time with old friends. Almost miraculously, nearly every actor from the first film has returned. (One exception is Madge Sinclair, who died in 1995.) The newcomers, in addition to Jones, Layne, Fowler and Snipes, also include Tracy Morgan, who gets some great, beamed-from-Planet-Zontar moments. And the costumes—by the great Ruth E. Carter—are something to behold: Some of the women are decked out in dazzling African wax prints draped into voluminous, dramatic shapes—they come at us with the authority of magisterial ships at sea. And the men, especially Murphy, get a great selection of fitted brocade tunics and jackets that meld African and Indian styles, though they’re really a nation unto themselves in their elegance. There’s plenty of spectacle in Coming 2 America, and a few laughs. But its chief value may lie in reminding us how good its 1988 predecessor really is. 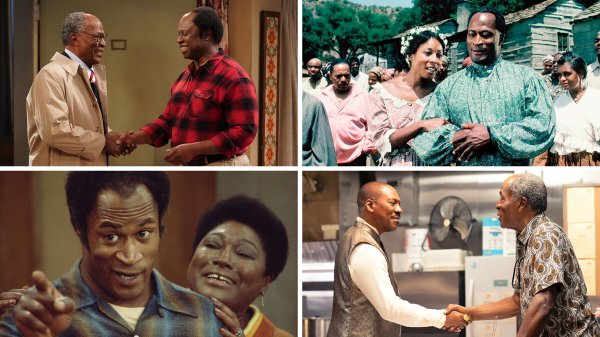 John Amos Reflects on 50 Years in Hollywood
Next Up: Editor's Pick