John Amos Looks Back on 50 Years in Hollywood

John Amos carries eight decades of American history in his sturdy 6-foot frame. Even if you don’t know his name, you’ve surely seen him onscreen, whether you’re a baby boomer or a member of Gen Z. His filmography is expansive: The Mary Tyler Moore Show. Good Times. Roots. Coming to America. The West Wing. Uncut Gems.

And on top of being a walking Hollywood encyclopedia, the actor has also charted the course of an American century in many other ways, from being one of the first young Black students at mostly white schools following Brown v. Board of Education to playing with the Denver Broncos to being a social worker at the Brooklyn House of Detention. “I knew what it was to be a bottom-of-the-rung laborer; a garbage man on an open-backed truck,” Amos says. “Each and every working experience that I had as a young man and then later in my life served me in good stead as an actor, because they all gave me hands-on experience.”

This month, Amos will revisit one of his most iconic roles—the wannabe burger magnate Cleo McDowell—in Coming 2 America, the sequel to the beloved Eddie Murphy comedy, streaming on Amazon Prime starting March 5. In a Zoom interview, Amos watched some of the most iconic scenes from across his career and reflected on the life experiences that impacted those roles—and the impact those roles in turn had on his life. Here are excerpts from the conversation.

Learning From the Best

Amos’ first major role, starting in 1970, was on one of the most successful sitcoms in America: The Mary Tyler Moore Show, which consistently drew high ratings and would rack up 29 Emmys over its seven-year run. Amos’ affable and talented weatherman Gordy was often the straight man in his scenes, genially absorbing a maelstrom of antics. Amos was also the only major Black cast member of the show, an experience that may have been new to him in the realm of entertainment, but not in his life. As a student, he had been part of the inaugural desegregating classes of two schools in New Jersey.

“I had suffered those indignities in real life integrating those two schools, of being told that I was a physical anomaly,” Amos says. “Having kids wipe their finger along your cheek to see if the black came off, or saying about my nose, ‘Geez, can you breathe through that thing or walk through it?’”

But Amos says the teachers at those schools encouraged his thespian instincts and pushed him to explore his creativity. And when he arrived at The Mary Tyler Moore Show, he says the cast and crew welcomed him with open arms. “It was an actor’s heaven,” Amos says. “Mary was quite a skilled comedienne, but her forte was really underplaying. What really could have been passed off as pedestrian comedy became an actor’s lesson in how you get people together—Cloris Leachman, Mary and so many wonderful, wonderful actors with good material—to become a life form, almost.”

Even though Amos was sharing space with comedic legends, finding steady work wasn’t always easy. “You could go from being employed constantly at a handsome salary for a relatively long period of time and then may not work for five years,” he says. “That is a very sobering feeling.”

To pay the bills, he took on many gigs in commercials. One time, a Pepsi commercial nearly cost him another acting job: “I broke away on my lunch hour and started drinking these 16-ounce Pepsis. After about the third one, I turned into a human fountain,” he recalls. “When I went back to work, I couldn’t finish the day because I kept belching every 30 seconds.”

In 1971, Amos was asked to take part in a singing-and-dancing commercial for the growing burger chain McDonalds, which had only started selling the Big Mac nationally three years prior. Amos had previously been a McDonald’s employee at one of their first Canadian outposts, so he gladly took on the commercial; almost two decades later, he was thrilled to close the loop by playing McDonald’s rival Cleo McDowell in Coming to America. “I thought that somewhere, God is proving that he has a sense of humor,” he says.

In 1974, Amos was cast in the Norman Lear sitcom Good Times, in which he played the patriarch of one of the first two-parent Black households on network television. The show would become a cultural touchstone for a generation, especially for Black viewers: Alicia Keys, Rick Ross, the Wu-Tang Clan and many other artists have name-checked Amos or his character James Evans in their lyrics. (Detroit rapper Royce da 5’9” even confessed to being “raised by Gregory [his brother] and James Evans” on “I Play Forever”). “That show was the closest depiction in reality to life as an African-American family living in those circumstances as it could be,” Amos says.

But Amos also remembers growing frustrated by the incongruity of the show’s white writers like Lear penning Black storylines he felt were inauthentic. “It was tooth and nail over what we felt was right. And our convictions were predicated on the experience,” he remembers. “Me, the experience of working and living at the time as an African American. And some of his writers, who theorized what my reactions or the character’s reactions would be, predicated on a Beverly Hills point of view for the most part.”

Exacerbating the situation was Amos’ temper, which he says was borne out of the PTSD he developed after playing professional football and boxing. Amos had harbored football dreams out of college as a path to economic freedom and signed a contract with the Denver Broncos before getting injured; he drifted around various minor and professional football leagues before flaming out. “It affected me in terms of not just retentive abilities, but the tendency to be prone to violence, as a result of football primarily,” Amos says. “I found early on in my acting career that I couldn’t resort to the same release of pressure valves: to haul off and hit a writer, who had given me some bad material, with a forearm smash.”

After three seasons of critical acclaim and high ratings, Amos was unceremoniously fired from the show. “There were several examples where I said, ‘No, you don’t do these things. It’s anathema to Black society. I’ll be the expert on that, if you don’t mind,” he recalls. “And it got confrontational and heated enough that ultimately my being killed off the show was the best solution for everybody concerned, myself included.”

“They thought I was talking about a revolution here in the studio—and I was,” he says. “I was a sign of the times that we just weren’t going to take any more, but hadn’t developed the social graces to express our disfavor.” He and Lear later reconciled—and the pair shared a hug at a Good Times TV reunion special on ABC in 2019.

Amos may not have started a revolution on Good Times, but he was about to be part of a different one: Roots. The 1977 show, which followed the story of the enslaved Kunta Kinte and his descendants, was an immediate cultural phenomenon, drawing an estimated 130 million viewers and prompting many frank discussions about the brutality of slavery and its continuing impact. “It meant so much to me on so many levels,” Amos says.

While Amos had initially gone out for smaller roles in the show, he was astonished to land the part of the middle-aged version of Kinte, the show’s hero. “I knew that it was a life-changing role for me, as an actor and just from a humanistic standpoint,” he says. “It was the culmination of all of the misconceptions and stereotypical roles that I had lived and seen being offered to me. It was like a reward for having suffered those indignities.”

As Amos’s career entered its third decade, he settled into many roles of authority, including police officers and military leaders. Amos’ father was a military man, which made him proud to take on such roles. His depictions of those parts were also informed by a job he had taken soon after college: as a social worker at the Vera Institute of Justice, working with defendants at the Brooklyn House of Detention. “My role was to try to acquire pretrial freedom for indigent defendants. These were teenagers who weren’t a threat to society: they just caught a bad break at a bad time,” he recalls. “And I saw them become old men in front of my eyes. It was very, very sobering.”

Amos says the job gave him a “greater appreciation for the whole judicial system and the inequities in it.” “Every time I played a correction officer or a law enforcement officer, whether it be military or civilian, I had those experiences to draw on. I took the exam to be a New York police officer long before I got any roles as a police officer in the entertainment industry. So it was all a way of preparation.”

And Amos was particularly happy when his West Wing character Admiral Percy Fitzwallace, the Chairman of the Joint Chiefs of Staff, got the chance not only to flex his military power but also his ability to effect social change. “He had the opportunity to address institutional grievances—but he never had to raise his voice or become demonstrative in his feelings to the point that it became so one-sided. I love the way that Aaron Sorkin had written this character’s dialogue, as it reflected on the man’s position and the military,” he says. “When he said, “beat that with a stick,” it was like tossing a gauntlet: ‘are you going to continue with this charade of inequities, or not?’”

In 2018, Amos got a call from his team about appearing in a new Adam Sandler movie. “They said, ‘What are you doing right now? Come over to the studio, do a walk-through with Adam,’ real casual-like,” Amos recalls. “I said, ‘sure, why not?’”

But the film was no ordinary Sandler flick: it was Uncut Gems, the Safdie Brothers’ chaotic and abrasive thriller which has already taken on the status of cult classic in some circles. In a strange scene in a movie full of them, Amos plays a version of himself who slams the door on Sandler’s character Howard, who asks if his son can use Amos’ bathroom.

When asked whether Amos knew why he was asked to make a cameo in the film, he responded: “Didn’t have a clue. Didn’t care. The check didn’t bounce. The catering was good. So it was a win-win all the way around.”

Coming Back to America

Perhaps Amos’ best known role is Coming to America’s Cleo McDowell. “Can you think of a better job than one where you know you’re going to be laughing all day, and they’re serving you food, and then you go back to laughing some more?,” he recalls about the original film. “Working with Eddie Murphy: I can’t describe it to you. You’re there. Nothing else exists. He is that character and he exudes that, and you in turn are obligated to give it back to him the same way.”

Amos isn’t in Coming 2 America for long, but he commands a pivotal scene in which he advises Prince Akeem (Murphy) on his future. The experience made him excited to be involved in the franchise in any capacity going forward. “If there is to be a Coming to America 3, and I hope there will be, they can wheel me to Zamunda in a wheelchair, and maybe I’ll be selling zebra burgers or hippo lips,” he says, laughing. “But if there’s a buck to be made selling the McDowell’s product, then rest assured, I will be there in the form of Cleo McDowell. There’s life left in the old boy yet.” 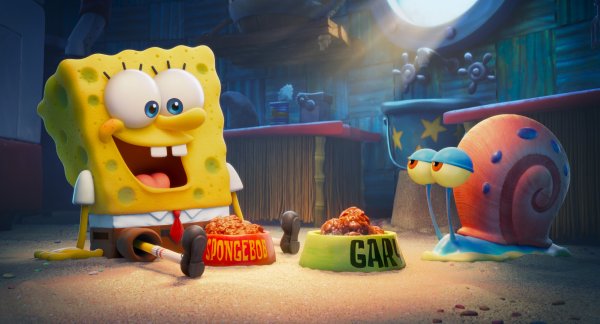 The SpongeBob Movie: Sponge on the Run Is a Ludicrous Undersea Delight
Next Up: Editor's Pick