How Home Bakers Have Found Sweet Success During the Pandemic

LADY AND THE CHOCOLATE: Sara Armet delivers chocolate bark by bicycle; L’APPARTEMENT 4F: Gautier and Ashley Coiffard run a French bakery from their home; KUKI MAN: S’mores cookies were a limited-run flavor; SUSANA TORRES: Though working harder than ever, Torres is fulfilling a longtime goal
Courtesy Sara Armet of Lady and the Chocolate; L’Appartement 4F; The Kuki Man; Susana Torres
By Raisa Bruner

When Tui Tuileta left Honolulu for college in 2016, he was renowned for his skills in volleyball, not baking. But these days, the 6-ft.-2-in. former U.S. national volleyball team member, who has since returned home, is best known around his native Oahu as the Kuki Man, thanks to his delectable cookies, which have soared in popularity in the past year.

Tuileta, 25, lost his job as a fire-knife dancer performing at luaus when the COVID-19 pandemic prompted shutdowns throughout the service industry in 2020. While he’s the first to admit he’s no kitchen whiz, Tuileta turned to baking in his newfound free time to satisfy his own lifelong craving for cookies. “If there’s one thing I can make, it’s cookies,” he says. His friends, who followed him on Instagram when he started posting about the desserts he was baking for himself last spring, quickly caught on. Soon, requests to buy his chunky, gooey creations rolled in.

Tuileta made his first cookie deliveries on April 1 last year. Now he is baking up to 400 cookies a week out of his parents’ oven, and delivering them all locally on the same day with the help of a friend. He insists the cookies, which come in limited-edition flavors like 3-in.-thick S’mores and Reese’s-topped peanut butter, taste best when they are fresh. Responding to popular demand, Tuileta will launch a website this month making stateside shipping available. And looking ahead to the end of the pandemic, Tuileta sees no reason to step back from his baking business.

“I’ll make cookies during the day,” he says, “and fire-knife dance at night.”

Tuileta is not the only one turning to the kitchen to feed more people than just himself. Across the U.S., some have found time and opportunity amid the upheaval caused by COVID-19 to create sweet new entrepreneurial ventures.

Actor Whitney Crowder was in the midst of producing and starring in a short film in March 2020 when the pandemic prompted shutdowns across New York City, putting her plans on indefinite hold. Her jobs as a bartender and pastry chef at a restaurant disappeared. Crowder was left with a 500-sq.-ft. apartment in Queens and her side project: baking cakes and taking custom dessert orders through her Instagram account, Sugar and Bite.

A self-taught chef, Crowder was for years the baker of choice for her friends–even crafting a wedding cake for a former boss–but had always resisted committing to another creative (and potentially financially risky) pursuit. But quarantine was a game changer. “I was like, O.K., well, the one thing I can do is focus on my baking,” she says. “I had time.”

After six years of working multiple jobs in New York, the free time was itself a novelty. The other surprise: demand for desserts. Crowder started adding to her recipe arsenal and experimenting with more intricate designs. Orders for her sweets–cheesecakes frosted to look like oil paintings; towering chocolate cakes flecked with gold leaf–tripled in a month. The short film, intended as a proof-of-concept project for Crowder and her partner, Adam Hardman, to take to Hollywood, fell by the wayside. And when the couple moved to Long Beach, Calif., last summer, Sugar and Bite went too, and through a virtual inspection, they received a government certification to make and sell goods from their new home’s kitchen. They adapted as the demand shifted: when the local farmers market was looking for a bread seller, Crowder and Hardman started making bread. The operation has continued to grow. Their farmers-market stand sells out weekly, no matter how much bread–and cake–Crowder brings. Custom orders are pouring in through a recently launched website, and they just opened a pop-up stand in a local shop.

“We’re going to have to expand soon to a commercial kitchen,” Crowder says. The couple has already maxed out storage in their apartment; bags of flour and cooling racks fill the linen closet, and the fridge is “jam-packed with doughs resting.” They work in shifts, with Hardman waking up at 5 a.m. to bake bread, sometimes just an hour after Crowder goes to sleep. She spends her nights decorating her cakes with the painstaking angst of a perfectionist. But the future is bright.

“This is going to be able to support us. We’ll be able to save up and make our short films,” she says. Crowder and Hardman have found a way to turn what might have been a pandemic survival job into something much more. “This is a passion job,” she says. It just happens to also pay the bills.

For home bakers across the country, creating and sharing treats with others has been one upside in a year of isolation. In Brooklyn, Gautier and Ashley Coiffard started selling croissants from their home under the moniker L’Appartement 4F; after just a month, they had made the $5,000 they were hoping to save for their wedding. Gautier, the chef, continues to work full time as an engineer during the day, while Ashley quit her job as a mortgage processor to run the business. “Everyone wants to feel connected, and the best way to do that is through social media and bread,” she says.

Across the East River in Manhattan, Sara Armet’s homemade chocolate bark–cheekily named the Lady and the Chocolate–has become a neighborhood favorite on the Upper East Side. The personal shopper and real estate agent made a major career change when she was struck with the idea on a whim. She delivers each order, often via Citi Bike, wearing signature heart sunglasses and a rhinestone face mask; now she’s raising money via crowdfunding to expand beyond her apartment.

In Los Angeles, Sabeena Ladha and Scout Brisson turned their shared interest in healthy eating and connections in the food world into a “good-for-you” vegan cookie-dough brand, Deux; they now sell it in trendy Erewhon markets, and plan to expand into stores nationwide by the fall.

No matter how different their origins, these home bakers are all crafting a meaningful future through their culinary pursuits. For some, it is a creative way to earn an income in tough times. For others, it’s a chance to home in on a newfound purpose. But for Susana Torres and her four daughters, the pandemic hasn’t just meant time to play around in the kitchen between jobs. They are fulfilling a long-deferred ambition.

Torres, who crossed the U.S.-Mexico border into Texas in the early 2000s, finally has her dream job: baking cakes. “When we first got to America, we sold cheesecakes, chocoflan,” Susana’s daughter Natalia Rodríguez Nuñez recalls. “It was to make ends meet. We were undocumented, and that didn’t require paperwork.” Torres soon picked up a job as a salesperson at an embroidery store at the border, where she worked for 13 years with no time for baking–until COVID-19 hit. Now, she runs her business, Susana’s Cakery, out of her home in Weslaco. Her daughters have helped by setting up her social media and fulfilling orders. “I am putting in more hours now, but I am doing what I am passionate about,” Torres, who is now a legal resident, says. The house smells delicious all day and all night, and she sells dozens of sweets every week: white chocolate raspberry cheesecake, three-tiered Bundt cake decorated with pastel swirls of frosting, classic tres leches.

“I put my heart in every single cake that I make,” Torres says. “I am very happy.” She envisions opening up a “very pretty cakery” where people can pick up confections to share for celebrations. As the pandemic eases its grip on the nation, her dream–and that of her fellow home bakers–crystallizes more each day. 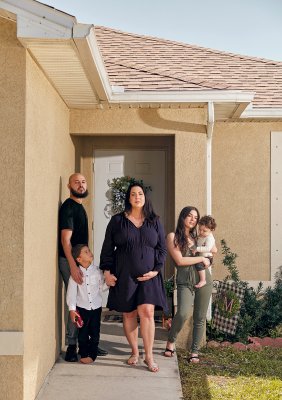 Moms Fired During COVID-19 Sue Their Former Employers
Next Up: Editor's Pick