It’s been 20 years since disability advocates won the fight to have the Franklin Delano Roosevelt Memorial in Washington, D.C. depict the former president in a wheelchair at the site. But they say there is more work to do to make the space fully accessible to all people with disabilities and serve as the “monument to freedom” that former President Bill Clinton said it would be upon the statue’s dedication.

Sen. Tammy Duckworth on Tuesday will introduce a resolution with D.C. Delegate Eleanor Holmes Norton calling on the National Park Service to improve the memorial’s accessibility to blind and low-vision visitors and to create accessible education materials about the site’s history.

While the 7.5-acre memorial was designed in the 1970s with wide stone paths and open spaces to be accessible to a broad range of people, its signs, placards and murals are still not accessible to people with limited vision. In fact, the braille on the monument is almost completely unreadable—and has remained that way since the sculptures were installed in 1997.

The braille on the memorial is too oversized for any person to read it, and some of it is too high for any human to reach. Sculptor Robert Graham told the Washington Post in 1997 that the braille was “a kind of invitation to touch, more than anything” and was not meant to be read. However, Park Service rangers and Sen. Daniel Inouye, who co-chaired the FDR Memorial Commission, appeared to believe the opposite, saying it would be legible. Shortly after its unveiling in 1997, Rep. David Bonior of Michigan introduced a resolution calling for the “artistic” braille to be supplemented with readable braille, but the issue remains today.

“Our national parks should be accessible to everyone, whether they read Braille or printed text, whether they get around by walking or in a wheelchair, like the American President whom this site honors,” Duckworth, who lost both legs serving in the Iraq War and often uses a wheelchair, said in a statement on Tuesday. “That’s why I’m proud to introduce this important resolution with Congresswoman Holmes Norton that honors the work of disability advocates in securing this statue and makes clear that there is much more work to be done to make this historic site accessible to all Americans.”

The braille is the second controversy that the FDR memorial has faced since it was built. Despite including wheelchair accessible spaces, it initially avoided depicting Roosevelt himself in a wheelchair, though the former president used one and did not walk independently after contracting polio at age 39. Disability rights advocates waged a six-year campaign to get the National Park Service to add a statue featuring Roosevelt in a wheelchair, which was dedicated on Jan. 10, 2001. Duckworth and Norton will recognize that milestone as well, according to the resolution shared with TIME.

“The FDR memorial, by honoring a great President, reminds us that there are no heights Americans with disabilities cannot reach,” Norton said in a statement. “Our parks and memorials should be accessible to all Americans, and I’m proud to introduce this resolution with Senator Duckworth to celebrate the 20th anniversary of the statue of FDR in a wheelchair and to call for accessibility improvements.”

The resolution notes that the Rehabilitation Act of 1973 prohibits discrimination against people with disabilities by any program or activity that receives federal funding and urges the National Park Service to “continue to increase access to the Memorial for individuals with disabilities, as required by law, including through the installation of tactile braille on signs and placards.”

The fight to include a statue of Roosevelt in a wheelchair is heralded as an important moment for people with disabilities. The effort, championed by the National Organization on Disability and grassroots activists, picked up support from four former presidents, 16 Roosevelt grandchildren and dozens of disability groups. Activists protested, and shortly before the memorial’s dedication, Clinton directed Congress to pass legislation requiring a statue depicting Roosevelt in a wheelchair be added, and then mentioned the change during the dedication.

Roosevelt was uncomfortable with his disability during his life and rarely allowed himself to be photographed in a wheelchair. The memorial, which is divided into four outdoor “rooms” representing the four terms of his presidency, initially included a sculpture of Roosevelt sitting, but with his body was covered by a cloth. Depicting him with his true appearance was “a great victory for people with disabilities,” Alan Reich, president of the National Organization on Disability, said in 2001 at the new statue’s unveiling.

Sen. Tom Harkin of Iowa, who co-sponsored the Americans with Disabilities Act and helped write the law requiring the memorial to depict Roosevelt’s disability, said the memorial went beyond valorizing Roosevelt. “It should be a reminder to all that disability is a natural part of the human experience and that it in no way diminishes a person’s ability to contribute to all parts of American life,” he told the Associated Press in 1998.

Two decades later, people with disabilities still frequently find themselves fighting to be included in many aspects of American life. Voting can often be difficult for disabled Americans because of obstacles at polling places and with mail ballots, and many websites are still not accessible to blind people or others with low vision. Duckworth has made it a point to advocate for the rights of people with disabilities during her time in Congress. In 2018, she helped get a law passed that requires airlines to disclose the number of wheelchairs they lose, mishandle or break, and has been outspoken about needing to protect and enforce the Americans with Disabilities Act.

The FDR Memorial Legacy Committee, which was established in 2019 to preserve the history of the disability community’s involvement with the memorial, is also asking the Park Service to address flooding and maintenance issues at the memorial.

The original version of this story misstated the year during which Alan Reich made his comments at the Roosevelt statue’s unveiling. It was 2001, not 1997. 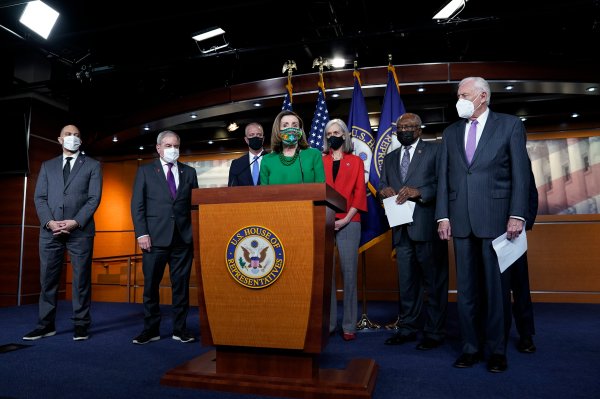 Why the Democrats' $1.9T Relief Bill Is Problematic
Next Up: Editor's Pick