When pro golfer Rocco Mediate heard the news that Tiger Woods was involved in a single-vehicle car accident in South California on Tuesday morning—and then saw the horrific images of the damage—he grew nauseated. By some small miracle, the injuries weren’t life threatening. Still, Mediate thought of the steeps rises and falls of Woods’ epic career. All the major victories, the public humiliation, the injuries, surgeries, and struggles with painkiller addiction. Then his 2019 Masters win, perhaps the greatest sports comeback story ever written. And now this.

“All the s–t he’s been through,” Mediate says from Tucson, Arizona, where he’s playing in a tournament on the Champions Tour, the 50-and-over pro golf circuit. “Then this happens? Come on. He’s been tested enough. Enough with the testing.”

Back in 2008, Woods and Mediate squared off in a memorable U.S. Open 18-hole playoff at Torrey Pines in San Diego. The matchup, aired on ESPN and NBC, became the most-viewed golf event in cable TV history, and the highest-rated golf broadcast on network TV in 30 years. With Mediate watching in the clubhouse, Woods had forced the playoff with an 12-foot birdie putt on the 18th hole on Sunday: he then let out one of his signature primal screams. On Monday, Woods sunk another birdie on the 18th hole to force sudden death, which he won with a par in the first sudden death hole. He did this all while playing with a double-stress fracture in his left tibia and a torn left ACL. The victory gave Woods his 14th major championship, his last before 2019.

The duel will forever link Woods, 45, and Mediate, 58, the affable golfing lifer who turned pro in 1985 and won six PGA tournaments—and no majors—during a career in which he struggled with back injuries. (Woods has won 82 tournaments, tied with Sam Snead for tops all-time). Foremost on Mediate’s mind is Woods’ overall health, his ability to walk around with his kids. In the crash, Woods suffered “significant orthopaedic injuries to his right lower extremity,” according to a medical statement released on his social media account, including a “comminuted open fractures” in both the upper and lower portions of his tibia and fibula in his right leg as well as damage to his foot and ankle bones, and trauma to the muscle and soft tissue of the leg. A comminuted fracture is when a bone breaks into more than two fragments; an open fracture means the bone broke the skin.

“Can he have a normal life if he doesn’t play golf?” says Mediate. “That’s all that matters. The rest of it, frankly, is horses–t.”

If any athlete could power through a painstaking recovery process and return to the course, it is Woods. “If he comes out on top, it wouldn’t shock me whatsoever,” says Mediate. “If he goes, ‘hey, I’m gong to try to hit some balls,’ you never know. If it was me, I’m done. I’m 58, I got nothing. Most people, they’re done too.”

Mediate knew Woods was hurting back at the 2008 U.S. Open, though he wasn’t aware of the severity of the injuries. What stood out to Mediate during the playoff: Woods’ refusal to display any outward displays of pain. Several times during that tournament, Woods grimaced after shots, because of his injuries. But once they went one-on-one on Monday for 18 holes, Woods refused to reveal his hand. “There was no grimacing on Monday,” Mediate says. “No getting down to his knees. He showed no weakness. During the week he was in bad shape. Most people wouldn’t have finished two rounds. I knew Tiger was coming, no matter what shape he was in. If we were boxing, he’d kick my a–. But this isn’t a boxing match. It’s making a score in a hole. It was a really cool day. And nothing he does ever surprised me.”

To this day, Mediate insists the worst part of that playoff match wasn’t the loss: it’s that it had to end. While the defeat did disappoint him, he looks back at the duel with fondness. He feels lucky to participate in a sporting event that will be discussed for decades. On Sunday in Arizona, Mediate and other senior players plan to wear red, in honor of Woods’ signature outfit on the last day of a tournament. “Something will be red,” Mediate says. “I’ll use red Sharpie on my hat, I don’t know.”

Mediate wants fans to remember and appreciate Woods’ singular impact on his game. “This is not a player we’re going to ever see again,” he says. “There’s nobody coming up who’s even close to what he did. Nobody. And if you tell me there is, I’ll tell you you’re full of s–t.”

After the accident, “if the golf happens, beautiful,” says Mediate. “If it doesn’t, beautiful. I mean, really: 82 tournaments, 15 majors. Not bad.” 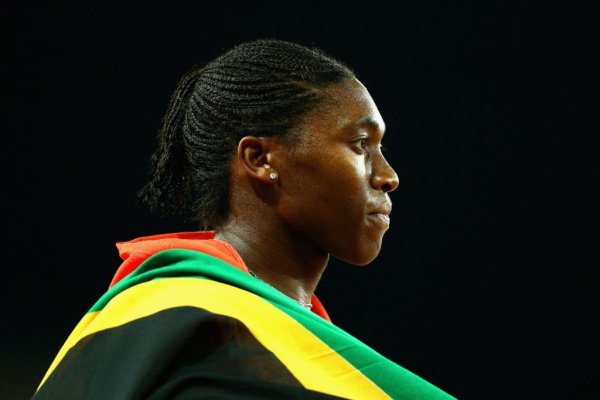 Caster Semenya Takes Her Case to the European Court of Human Rights
Next Up: Editor's Pick