How Tiger Woods Completed One of the Greatest Comebacks in Sports

The most thrilling comeback in American sports history had to be completed at Augusta, at the Masters on a Sunday afternoon in April.

After all, the Augusta National Golf Club is where Tiger Woods, 22 years ago, first burst into our cultural consciousness, like no one we had ever seen before: golf’s first black superstar, a player who everyone figured would rewrite his sport’s record book. He won by a dozen strokes that day in 1997, as a 21-year-old, and never looked back. By the time he was 32, Woods had won 14 major championships, even taking four in a row — the 2000-2001 Tiger Slam — during his astonishing prime. He gave a mass audience a reason to stay inside on Sundays, and watch men walk on grass and swing at a little white ball.

Then came the personal scandal about a decade ago, which the fed tabloids for months and destroyed his marriage. He returned to golf, but kept getting hurt. He had four back surgeries in three years, between 2014-2017. Woods fell out of the top 1,000 in the world golf rankings. He thought he may never play again. On Memorial Day Weekend in 2017, police found him asleep at the wheel, and arrested him. He had painkillers in his system, and was struggling with managing that pain. Wearing a Green Jacket less than two years later was unimaginable.

But here we are. It seemed Woods and one of his playing partners in the final group, Francesco Molinari, would go shot for shot down the stretch. But on the 15th hole Molinari, last year’s British Open champion, hit a shot in the water, essentially knocking him out of the tournament. Woods, wearing his signature Sunday red, with a mock turtle neck, birdied the par 5 and was now alone with the lead. Unlike his last Masters win in 2005, when he needed a miracle chip on the par 3 16th hole to pull it out, Woods stuck his tee shot on 16, giving him another birdie and more breathing room. Now, he could essentially soak in a coronation. Brooks Koepka — winner of three majors since 2017, and playing in the group ahead of Woods — could have cut Woods’ lead to a single stroke on 18, but he missed a make-able birdie putt. All Woods needed was a bogey 5 on 18 to clinch it.

Tiger had been crawling towards his moment. He contended in the last two majors, which enabled him to refresh his memory of how to win one: plod along, let the other guys make mistakes and stay calm.

When he tapped in the winning putt, for his 15th career major, Woods screamed and flipped his club. He hugged his son Charlie, who wasn’t born the last time Woods won a major 11 years ago, and daughter Sam, who was about to turn one. Woods grew hoarse from all his yelling. He refused to hide his catharsis. Augusta’s proper “patrons” turned into actual sports fans, celebrating as if their team just won a Super Bowl. “Tiger! Tiger! Tiger!” the fans chanted, pushing up the volume to college football stadium decibel levels.

The 14-year gap between Tiger’s fourth and fifth Masters wins is the largest in golf history. The last time he won a major, Barack Obama and John McCain hadn’t even been officially nominated as presidential candidates. Woods’ chase of Jack Nicklaus’ record 18 majors titles is officially back on. We once thought we’d be commemorate that historic moment — Woods passing Jack with 19 — circa 2011 or so.

In recent years, we could afford to forget that storyline. It was dormant, like Tiger’s game. He was almost done. Not anymore. Because Tiger Woods just won the Masters. 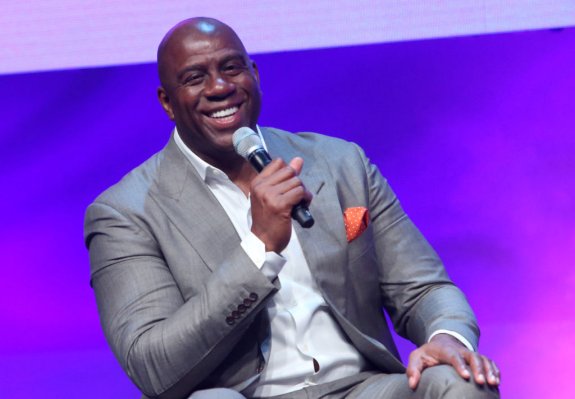 Why You Can't Blame the Lakers' Magic Johnson for Calling it Quits
Next Up: Editor's Pick