NASA’s Perseverance rover is the gift that keeps on giving.

In the wake of the rover’s awe-inspiring touchdown on Mars on Feb 18, an event that brought over 20 million people together to watch NASA’s livestream of the successful landing, there was even more to the incredible spectacle than met the eye. An intrepid computer science student and his father cracked a coded secret message hidden within the pattern of the parachute that the rover used to descend onto the Martian surface.

Allen Chen, the engineer in charge of the landing system, hinted during a Monday news conference that video footage of Perseverance’s parachute deploying contained a hidden missive. So the 23-year-old student, Maxence Abela, and his Google software engineer father, Jerome Abela, set to work solving the puzzle.

By breaking down the parachute’s pattern into 10-digit sequences of binary code, the Abelas deduced that the numerical sequences within the parachute’s inner three rings, when assigned to English alphabet letters, read “DARE MIGHTY THINGS.” Maxence posted the father-son team answer, along with an explanation, on Twitter around two hours after Chen made his original statement.

“We like those kinds of little challenges,” Maxence told the New York Times. “We didn’t think we would be able to solve it, but we would at least try.”

The fourth ring, as Adam Steltzner, the chief engineer for Perseverance, later shared, works out to be the longitude and latitude of NASA’s Jet Propulsion Laboratory in California: 34°11’58” N 118°10’31” W.

The parachute’s Easter egg hidden message is one that seems to epitomize NASA’s overall goal for the Perseverance mission.

“The Mars 2020 Perseverance mission embodies our nation’s spirit of persevering even in the most challenging of situations, inspiring, and advancing science and exploration,” acting NASA Administrator Steve Jurczyk said in a statement. “The mission itself personifies the human ideal of persevering toward the future and will help us prepare for human exploration of the Red Planet.” 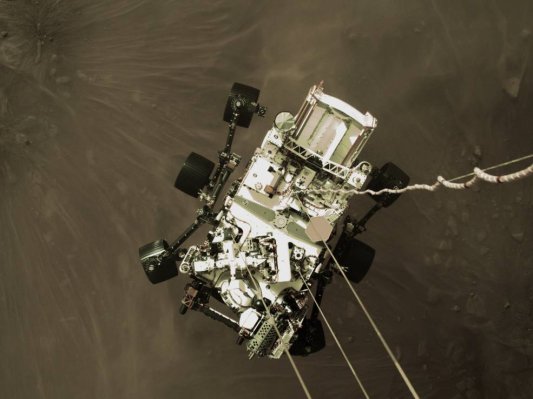 Watch the Perseverance Rover Land on Mars in This Newly Released NASA Video
Next Up: Editor's Pick