In Noël Coward’s 1941 play Blithe Spirit—and in the film David Lean made of it in 1941, a delectable bonbon laced with the driest of vermouth—a writer toying with the occult as research for his next novel inadvertently conjures the ghost of his first wife, who proceeds to wreak havoc on the life he’s built with his second. Coward, one of the slyest wits of his century, took the idea of pining for a loved one, drained it of all potential sentimentality, and fashioned it into a lively, sophisticated farce. Only he could make champagne out of grief.

Now there’s a ginger-ale version too, not that anyone asked for it. Director Edward Hall and writers Piers Ashworth, Meg Leonard and Nick Moorcroft have taken Coward’s premise and pumped extra sugar into it, as well as some unnecessary preservatives. Dan Stevens stars as blocked writer Charles Condomine, desperate to finish a script he’s promised to his father-in-law film producer. His wife, Ruth (Isla Fisher), flutters around him supportively when she’s not tending to the couple’s lavish property, a deco moderne sprawl of a house that’s the opposite of classically genteel British taste. (The film is set in England in 1937.)

But Ruth is losing patience with her husband. He’s been distant and preoccupied, and their love life has suffered. “Big Ben’s stopped chiming,” Charles tells his doctor friend (played by Julian Rhind-Tutt) with forced jauntiness, an un-Cowardly vibe if ever there were one. Ruth catches her husband gazing at a photograph of his first wife, Elvira, and feigns indifference. Then a seemingly phony spiritualist, Madame Arcati (Judi Dench), surprises even herself by summoning a spirit from beyond: that of Elvira, a devil-may-care blonde with a destructive streak (played by Leslie Mann). Charles—who is at first the only one who can see her—falls under his deceased wife’s spell. Meanwhile, Ruth goes about her shallow, society-lady business, even as Elvira strives to undermine her. The ensuing battle is a supernatural catfight over a man who’s hardly worth their time.

Coward’s characters, as he wrote them, aren’t exactly likable, but they’re dazzling in their sophisticated self-absorption—you want to hang around them just to find out what they’ll say next. Not so with the versions Hall gives us here. The problem isn’t that the actors aren’t up to the idea of Coward: Mann has a dizzy but sharp screwball quality; Stevens, capable of terrific, dashing goofiness, gave one of the finest comic performances of last year as a stuck-up, puffed-up pop star in Eurovision Song Contest: The Story of Fire Saga; and Fisher has marvelous comic timing, as well as an expressively cherubic face right out of a 1930s comic strip. But in this Blithe Spirit, every gag hits with a cartoonish thud; you feel walloped rather than tickled. And the writers of this new, not-so-improved version have concocted a sentimental backstory for Madame Arcati that throws the movie’s tone out of whack. It’s as if Hall doesn’t trust his audience to appreciate Coward’s delightful acidity—he’s scrubbed all of that away, as if it were tarnish and not the actual shine. Studied and overworked, this Blithe Spirit trips over its own ectoplasmic feet. Somewhere, Coward is scowling. 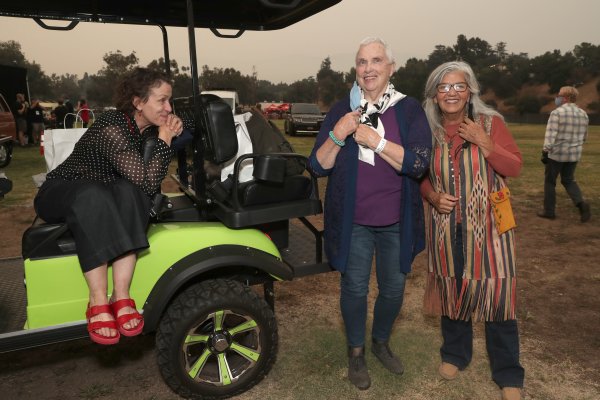 The Real-Life Community Behind Nomadland
Next Up: Editor's Pick