Eurovision Song Contest: The Story of Fire Saga Has One Winner, and It’s Not the Movie’s Leads

Forget comedy superstars; supporting players are the comedy gods’ true gift to us, especially in the Will Ferrell vehicle Eurovision Song Contest: The Story of Fire Saga. Ferrell and Rachel McAdams star as Lars Erickssong and Sigrit Ericksdottir, two Icelandic misfits with hearty voices and a big dream: to enter, and possibly win, the Eurovision Song Contest, the televised international songwriting competition that draws a huge audience in many parts of the world, if not the U.S.

Through a few chance twists, Lars and Sigrit—supposedly terrible singers, though they don’t sound so bad—get a shot at the big prize. Then they’re derailed by one mishap after another: in a routine that requires them to appear airborne, Lars’ harness breaks and he crashes to the ground—hilarious! When the duo finally make it to the Eurovision stage for the finals, Sigrit learns that Lars, who designs the pair’s costumes, has lengthened her scarf by a few dangerous feet; she comes close to meeting an Isadora Duncan–style end, and though director David Dobkin stresses the gag’s exaggerated slapstick proportions, it’s still not funny. There’s also a goofy subplot involving Lars’ refusal to acknowledge Sigrit’s longing for him. Even though the hyperbolic mismatch between the gentle, charming Sigrit and the bumbling Lars is clearly part of the gag, it’s still nearly impossible to have any emotional investment in these two.

But wait—second banana to the rescue! In a vampire dandy’s flash of brocade and velvet, Dan Stevens (perhaps best known as the ill-fated Matthew Crawley in the early seasons of Downton Abbey) shows up as conceited hottie billionaire Russian crooner Alexander Lemtov. During rehearsals, Lemtov takes the stage for his pyrotechnic-heavy number, “Lion of Love,” prowling the stage like a zoo cat in heat. He flashes a wink at Sigrit; she’s flattered, but resists. In his faux-Russian accent, as ornate as an imperial samovar, he promises her many riches—“mansions, palaces, wi-fi in every room”—and still, Sigrit sticks with Lars. Her loss. As Lemtov, Stevens is so absurdly lascivious that he supercharges the movie every time he shows up, which, thankfully, is often. Innocent gazelles everywhere, look out. 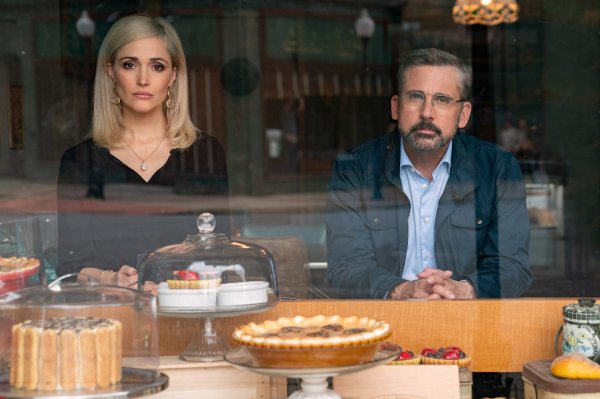 Review: 'Irresistible' Is Light on Revelations
Next Up: Editor's Pick