At this point in most new administrations, all eyes are on the White House. A new team is rolling into Washington, eager to put its mark on politics and eager to get going on campaign trail promises to undo what came before. Presidential appointments, the first address to Congress, the big-ticket projects like health care or education — these typically give newspaper editors their Page One stories for weeks and capture the public’s attention.

As Joe Biden gets ready to hit the one-month mark of his presidency on Saturday, his early moves are not consuming all of the political oxygen in Washington. Congress’ failed attempt to ban former President Donald Trump from ever returning to power came up short over the long weekend, even as it was abundantly clear that Senate Leader Mitch McConnell has zero interest in bringing him back to power. Conservative media has been overrun both by New York Gov. Andrew Cuomo’s latest scandal and an emerging denialism that the failed insurrection at the heart of Trump’s second impeachment even happened.

Yes, you read that correctly: Jan. 6 denialism is becoming a thing. Laura Ingraham devoted a five-minute segment last night on her Fox News show to float the theory that the Jan. 6 attacks didn’t happen as we believe them to have, the Democrats manufactured evidence of it and that Nancy Pelosi needs to answer for the chaos that really was just a hoax.

“She clearly doesn’t want to answer what happened and what her roles and responsibilities — or her staff — were that day,” posited Rep. Devin Nunes, a California Republican and a close ally to Trump, in an appearance on Ingraham’s show. He and other conservative lawmakers are trying to turn the failed insurrection into Pelosi’s problem and not a violent assault on Congress egged on by Trump.

Biden was never going to get a sympathetic nod from the likes of Nunes or Ingraham, but it’s what this incipient fiction says about what’s happening outside the Beltway and television studios that matters. A lot of Americans are still watching Trump, and they’re willing to consider this denialism, or some version of it. Sen. Ron Johnson, a Wisconsin Republican whose seat is on the ballot in 2022, told a conservative radio host yesterday that he was aware of only one shot fired on Jan. 6 and disputed the label of the mob being “armed.”

This may end up being the new normal. Trump’s second acquittal at the hands of the Senate kept him in the headlines. The emerging investigation of Trump’s and allies’ calls to Georgia election officials are going to keep him there. A 9/11-style commission on the Jan. 6 attacks will sustain his relevance. Even the removal of traffic barricades at his former penthouse at Trump Tower merits note in the national media.

It makes it easier to see why President Gerald Ford made the unpopular move to pardon Richard Nixon back in 1974. To get the country to move on past a deposed leader, the country actually has to turn away from him. Ford got this — and his fellow Republicans paid a huge political price for it in the midterms, losing 43 House seats and three Senate positions as reform-minded candidates ran for office crusading against Nixon. The class of so-called Watergate Babies prevailed at the ballot boxes, but America was able to move the debate over Nixon to a back burner and off every front page.

There’s no real suggestion that Biden has any plans to pardon Trump at this point, but it’s sure a tempting thought to give Biden the runway for takeoff that he needs. This should be Biden’s moment: the country is united around the prospect of a pandemic relief package and Biden’s job approval ratings are roughly in line with his modern predecessors at this point in the first term. (Except for Trump, of course, who ran about 10 points behind his peers.)

A popular new President should not be struggling to claim dominance of the national conversation. But as long as Trump is in the mix, the 45th President will suck up the airwaves. Even while banned from Twitter and Facebook, an unusually quiet Trump can still dominate an agenda, something he understood for years as he toyed with running and eventually did.

As a politician, Biden doesn’t care much about press cycles or publicity. He has done just one TV interview as President, the Super Bowl-pegged edition of CBS News’ 60 Minutes. He will have a second tonight on CNN, a town hall in Milwaukee.

But if you’ve got big dreams like he does — and a finite amount of time to make good on campaign promises — then it’s not helpful to have Trump stealing the spotlight. That’s why it’s awfully tempting to see him make Mar a Lago the new La Casa Pacifica. 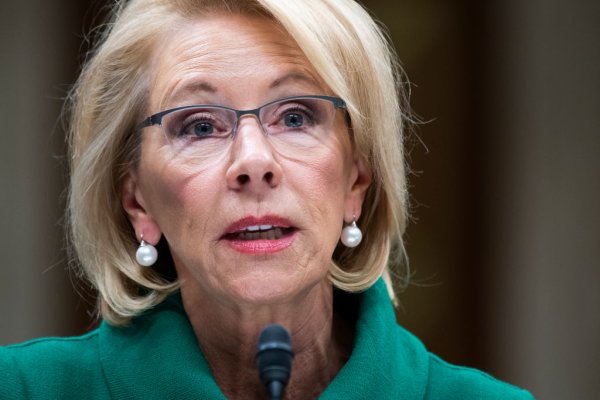 Why Biden’s DOJ Is Backing Betsy DeVos
Next Up: Editor's Pick