Confused by Trump's Defense? So Were Republican Senators

If you didn’t quite follow former President Donald Trump’s defense team’s argument on the opening day of the Senate impeachment trial, Republican Senators were right there with you.

“I thought I knew where he was going, and I didn’t really know where he was going,” said Senator Lindsey Graham about Bruce Castor, the lead counsel for Trump’s defense team, following the Senate’s vote on Tuesday confirming the constitutionality of trying a President when he is no longer in office.

The Senate is considering the case of the only President to be impeached twice in American history. It comes after the House of Representatives voted to impeach him for inciting the deadly insurrection at the Capitol by a pro-Trump mob on Jan. 6. More than a month after the attack, the Capitol remains surrounded by a perimeter and patrolled by National Guard troops assigned to protect the complex and those who work there.

Castor got off to a clumsy start by accidentally referring to himself as the lead prosecutor. His performance didn’t improve as he stumbled through at-times confusing and meandering remarks, in which he failed to present a clear defense of the former President. Instead, he appeared mostly to be attempting to ingratiate himself with Senators by flattering them, at one point referring to them as exceptional.

Asked what he made of Castor, Senator Ted Cruz of Texas responded to reporters with an “um” and an uncomfortably long pause. “I don’t think the lawyers did the most effective job,” he finally responded after several seconds.

The results of the vote on Tuesday, in which 44 Republican Senators voted that the trial was unconstitutional, indicate Trump is unlikely to be convicted. Only six Republican Senators crossed party lines to vote with Democrats, far short of the 17 that would be needed to convict. But the 56 Senators who voted that the trial was in accordance with the Constitution was a majority, and so the Senate will continue with the trial this week. The House impeachment manager and defense will begin presenting their cases on Wednesday.

On Capitol Hill, there is a widespread perception that the outcome is preordained. But the open criticism Republicans aired of the former President’s team was unusually candid.

“I’ve seen a lot of lawyers and a lot of arguments. That was not one of the finest I’ve seen,” said Republican Senator John Cornyn of Texas, who added he found the team effective. When a reporter noted that he’d just leveled some serious criticism toward the former President’s lawyers, Cornyn nodded.

The defense’s stilted performance was was all the more striking following the House impeachment managers’ opening arguments. The Democratic lawmakers made the case using a harrowing montage of videos from the Capitol attack on Jan. 6 that blasted through the Senate chamber. They wove in legal opinions on the question of constitutionality from conservative legal voices.

Rep. Jamie Raskin, the lead impeachment manager, gave emotional testimony from the day of the insurrection, which occurred one day after he buried his son who died of suicide at the end of last year. As Raskin recounted his experience of the day of the attack on the Capitol, which included being separated from his daughter and son-in-law, who were also in the Capitol to accompany him during a devastating week, the Senate sat in rapt silence.

Even Trump’s lawyers acknowledged the impeachment managers’ comments were powerful, noting during their argument that the case brought by House Democrats was so well done it resulted in the defense modifying their strategy at the last-minute.

Senator Bill Cassidy of Louisiana was the only Republican who changed his vote from a procedural vote held last week that also signaled where Republicans stood on the question of constitutionality. He joined Democrats this week, and said the contrast in the teams’ performances informed his surprise decision.

“President Trump’s team [was] disorganized. They did everything they could but to talk about the question at hand,” Cassidy told reporters after the vote. “And when they talked about it, they kind of glided over, almost as if they were embarrassed of their arguments. Now I’m an impartial juror, and one side is doing a great job. And the other side is doing a terrible job on the issue at hand. … I’m going to vote for the side that did the good job.”

Other Republicans who voted with Democrats made similar points. “The House presented a… pretty good legal analysis. In fairness, I was really stunned at the first attorney who presented for former President Trump,” Senator Lisa Murkowski of Alaska told reporters. “I couldn’t figure out where he was going, spent 45 minutes going somewhere, but I don’t think he helped with us better understanding where he was coming from on the constitutionality of this.”

While she said she believed David Schoen, the other defense attorney who also made remarks on Tuesday, did a better job, Murkowski said she thought Castor was “a missed opportunity.”

“The second attorney representing the president clearly did [make an argument] and did a competent job,” said Senator Susan Collins of Maine, who also voted with Democrats on the constitutionality of the Senate trial. “But I’m puzzled by the presentation by the first attorney, so I don’t know how they’re gonna proceed from here on out.” 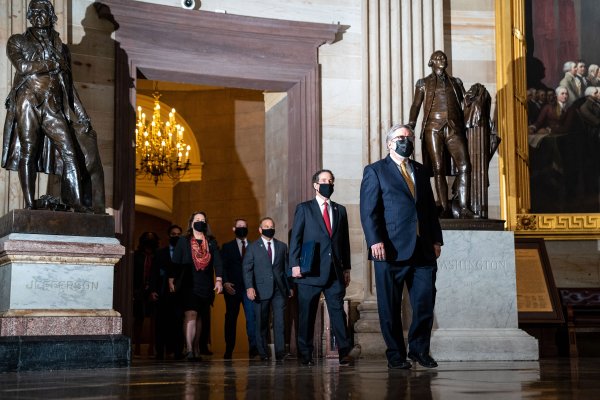