Ngozi Okonjo-Iweala Believes the WTO Can Change the World. But First It Needs Reform

On its surface, the mandate of the World Trade Organization is relatively circumscribed: to make and enforce the rules of the road for global trade and resolve problems when they arise.

Ngozi Okonjo-Iweala has much loftier goals for the organization she is expected to take the helm of next week—the first woman to ever hold the position of WTO director-general. She tells TIME that global trade can help ease the COVID-19 pandemic, tackle climate change and restore faith in the system of cooperation that has faltered in recent years. The WTO has a central role to play as facilitator, Okonjo-Iweala says. “If the WTO did not exist,” she says, “you would have to invent it.”

But to get the WTO to a place where it can execute on that agenda will take some work. And the only way to get the WTO back on track, she says, is to remake the institution. “The world needs the WTO,” she said in a Jan. 29 interview with TIME over Zoom. “And the WTO needs extensive and serious reform.”

Okonjo-Iweala was born in Nigeria in 1954, then under British colonial control, and received her primary education there before coming to the U.S. to study, first as an undergraduate at Harvard and later a PhD student at MIT. She worked in the U.S. after graduating, addressing the challenges posed to economies in the Global South while working as a development economist at the World Bank. In 2003, she began a three-year stint as Nigeria’s finance minister; she returned again to reprise that role in 2011. In Nigeria, she earned a reputation as a corruption fighter as well as an artful dealmaker, helping negotiate a write off of $18 billion in national debt. Since then she’s been a fixture on the international stage, speaking frequently on issues like climate change, public health and global development.

Okonjo-Iweala’s accession to the top spot at the WTO follows a long and winding process. The previous head stepped down in August, and Okonjo-Iweala emerged as the favorite of the organization’s 160-plus member states in October. Still, the Trump Administration unilaterally blocked her candidacy, one of a series of actions from the former president that stymied the organization. On Feb. 5, Biden trade officials expressed “strong support,” and Okonjo-Iweala became the presumptive next WTO director-general.

Cleaning up the immediate mess left behind by Trump will inevitably be high on Okonjo-Iweala’s agenda. Trump blocked new appointments to the WTO’s appellate body, leaving it unable to rule on trade disputes and effectively giving Trump’s tariffs a free pass. Okonjo-Iweala said the panel is ripe for change. “There’s criticism of the appellate body, the dispute settlement system,” she said. “That needs to be taken care of and reformed to a point where all members, big and small, believe and trust in the system and can use it.”

But Okonjo-Iweala is looking far beyond the Trump Administration as she considers how to restore faith in the WTO. In part that means looking backward to the organization’s founding. Okonjo-Iweala noted that many of the countries subject to WTO rules today were under colonial rule when the current international financial regime was established after World War II. “I think multilateralism itself has been under attack for some time—and I think that attack intensified in the last four years—but it’s been under attack because these institutions like the WTO were developed 76-77 years ago,” she said. “There are questions about the rules: how does this work? Is this fit for purpose?”

This means finding ways to ensure that small developing countries benefit as much from global trade as their wealthier counterparts. “They need a level playing field,” she said.

Reforming the WTO also means looking forward to address challenges unimaginable in 1947 when countries signed the General Agreement on Tariffs and Trade, an international agreement that served as a precursor to the WTO. Chief among them is the warming planet and all of the attendant challenges. Climate change isn’t officially included as part of the WTO’s mandate, but the agency could take on outsized importance for the global climate agenda as a growing number of countries consider trade barriers for high-carbon products from countries without a comprehensive climate program.

Opponents of such measures say they fly in the face of the principles of free trade and are likely to be struck down by the WTO, but Okonjo-Iweala said that if constructed carefully they could offer an important solution. “I don’t see anything in the WTO rules that is against them,” she said. “But then again you have to be careful how they are put into the rules so that they are applied in a way that is fair and that works.”

Okonjo-Iweala has spent recent years as a co-chair of Global Commission on the Economy and Climate, an initiative of former high-ranking government officials, executives and members of civil society working to make climate change a central consideration in global economic policy. She sees working at the WTO as an avenue to further that push. When asked about the link between climate change and trade, she said that policymakers should consider policies to address the climate implications of the logistics conducting trade—namely, how goods are transported—as well as the carbon-content of traded goods themselves. In particular, she calls for a carbon tax, which she said “could be seen by finance ministers as another way of bringing in additional revenue whilst encouraging better economic behavior with respect to climate change.”

While climate is a clear focus for Okonjo-Iweala, the response to the COVID-19 pandemic got her the most animated during our 45-minute conversation. In December, Okonjo-Iweala wrapped up a five-year term leading the board of GAVI, the global alliance that helps developing countries secure access to vaccines. The organization, which works to distribute vaccines for diseases like measles, pivoted quickly last year to work on COVID-19 vaccine access in the developing world. Today, there’s a significant gap in access to the vaccines between developed and developing countries despite commitments from leaders in the Global North to support wide access. The WTO, Okonjo-Iweala said, can help ensure that vaccines and other treatments make it across the globe by pushing back against trade restrictions designed to keep supplies at home even when they’re needed elsewhere, and by working “with other organizations to improve accessibility and affordability of vaccines, therapeutics and diagnostics.”

After all, she said, like most everything else we consume, “these are traded products.”

Okonjo-Iweala’s appointment has been met with widespread acclaim; the Biden administration touted her “proven experience” while European Central Bank President Christine Lagarde said Okonjo-Iweala will “rock the place.” But thorny challenges remain as Okonjo-Iweala finds herself in the middle of a whirlwind of global disputes. To succeed will be a tremendous feat, requiring her to bridge some of the biggest divides in 21st century geopolitics. Her supporters think that’s exactly what her resume has prepared her to do. 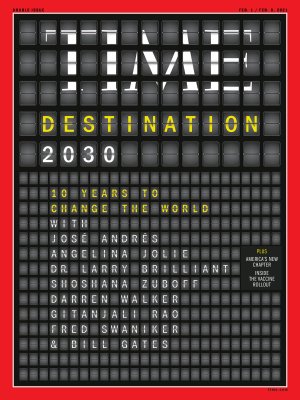 Introducing the TIME 2030 Committee Advising on Solutions for the Future
Next Up: Editor's Pick