A Salvadorian girl sits near a Biden-Harris campaign poster inside a camp for asylum seekers on Feb. 7, 2021 in Matamoros, Mexico.
John Moore—Getty Images
By Jasmine Aguilera

For close to a month, lawyers for Maria, an asylum seeker from Honduras, have tried repeatedly to convince border officials to let the 54-year-old into the U.S. due to her severe and urgent medical condition, but their requests have so far been denied.

Maria has been waiting for nearly a year and a half at the U.S. border with Mexico for her asylum claim to be adjudicated in the U.S. under the Trump Administration’s Migrant Protection Protocols (MPP), also known as the “Remain in Mexico” policy. Her latest rejection came on Thursday, just hours before the Biden Administration announced a plan to begin processing an estimated 25,000 people in Mexico with active MPP cases out of the program and into the U.S. As of Friday, Feb. 12, Maria was still in Mexico, living at a shelter with her son.

The announcement was met with enthusiasm by lawyers and advocates who have long criticized the policy, which requires asylum seekers to wait out their asylum case in Mexico, as inhumane and cruel for forcing many asylum seekers to live in dangerous conditions.

But many advocates also share concerns for how effectively the plan will play out, particularly in regards to DHS’ planned virtual online registration system. Asylum seekers will use the system to receive individualized details for when and where they will be admitted into the U.S. Those who have been waiting the longest will receive priority.

Clothing drying on a fence at a camp for asylum seekers in Matamoros, Mexico, on Feb. 7, 2021.
John Moore—Getty Images

Thousands of asylum seekers have remained close to the U.S.-Mexico border waiting for news of their case and orders to appear in court—though most court dates have been postponed due to COVID-19, prolonging wait times in Mexico. Many asylum seekers have been able to find work, apartments or homes to live in while they wait. But thousands of others, including Maria and her 11-year-old son, have had to find shelters to take them in, or live in makeshift tent encampments run by NGO’s and local charities.

Read more: Migrants Stranded in Mexico Have 1 Year to File for Asylum. COVID-19 Is Making That Deadline Nearly Impossible

Since MPP began in January 2019, over 70,000 immigrants have been enrolled in the program, according to Syracuse University’s Transactional Records Access Clearinghouse (TRAC), a research organization. Though DHS announced it has identified 25,000 asylum seekers who still have active MPP cases, TRAC reports that number is higher, at 29,148, according to data released Friday.

“Although some people with pending cases may have given up after waiting for their hearing or due to violence in northern Mexico, it remains a legal and moral imperative that the U.S. government abide by national and international refugee law and provide these individuals with an opportunity to request asylum,” Austin Kocher, TRAC faculty fellow, said in a statement. “Unfortunately, DHS’s process for hearing these remaining cases relies on a virtual registration process that may actually exclude precisely those asylum-seekers who don’t have access to technology and who are the most in need of protection.”

For Maria, a transition into the U.S. can’t come soon enough. In September 2019, Maria was brutally raped by a group of men in Ciudad Juárez while she made her way home to a shelter for migrants after leaving work. As a result of the rape, she developed a rectovaginal fistula that requires extensive and urgent treatment.

On Thursday, lawyers for Maria learned that their third attempt to have her removed from MPP under a clause that vulnerable asylum seekers with known physical or mental health issues should be paroled into the U.S. had failed. Though they presented government officials with medical records, Maria was once again denied entry into the U.S.

A U.S. Border Patrol surveillance tower stands on the other side of the Rio Grande in Matamoros, Mexico, on Feb. 7, 2021.
John Moore—Getty Images

Brooke Bischoff, an attorney with the legal nonprofit Las Americas Immigrant Advocacy Center in El Paso, Texas, who represents Maria, tells TIME she doesn’t know yet what DHS’s plan means for Maria and her son. According to MPP guidance to U.S. Customs and Border Protection (CBP) issued during the Trump Administration, asylum seekers with known physical and mental health issues should not be in the MPP program to begin with, but lawyers and advocates for two years have tried to remove vulnerable individuals with clear medical conditions from MPP on a case-by-case basis, and have had minimal successes.

Read more: Vulnerable’ Asylum Seekers Are Supposed to Be Able to Stay in the U.S.—But Critically Ill Migrants Are Still Being Sent Back to Mexico

“[Maria is] really struggling, she’s in a lot of pain,” Bischoff says. “At one point she told us that she thought she was dying. It’s just a real struggle for her right now at this point, and we obviously want her out [of MPP] as soon as possible.”

“While this is a definite positive step forward,” Bischoff adds, “we are still nervous about what this process will look like but we’re also extremely hopeful that this program [MPP] is coming to a close.”

TIME has reviewed Maria’s medical records and other supporting documents provided by Bischoff and Las Americas, and agreed to identify Maria only by her middle name for her protection because she is afraid of being identified by her attackers.

DHS did not respond to TIME’s request for comment and further details about the plan, but DHS Secretary Alejandro Mayorkas told NPR on Friday morning that the government will be “sensitive to acute vulnerabilities… to accelerate them as well.”

“This will take time to build,” Mayorkas added. “But we are poised to begin the program later this month.”

DHS’s announcement on MPP comes as parts of the border have started to see an increase in the number of migrants apprehended since the start of the Biden Administration, according to CBP. “Since early 2020, CBP has faced a growing number of individuals attempting to cross the southwest border, averaging about 3,000 arrests per day in January 2021,” the agency announced on Feb. 10.

DHS’s Thursday MPP announcement urged that “it should not be interpreted as an opening for people to migrate irregularly to the United States,” and that asylum seekers under MPP should wait where they are for further instructions rather than try to make their way to a port of entry.

In Matamoros, where currently estimated 900 asylum seekers live in a tent encampment, the medical aid NGO Global Response Management (GRM), says they have noticed an increase in the number of people joining the camp in January after numbers had been dwindling because of the COVID-19 pandemic.

Andrea Leiner, director of strategic plans at GRM, tells TIME that the population at the camp, which at times has surpassed at least 1,200, dropped to about 500 in December. In January, the population increased to 900 as people rejoined the camp, along with other asylum seekers under MPP who never lived at the camp before.

She adds that international aid organizations like UNHCR, USAID and UNICEF will be assisting with the transition.

“I know I can speak for all the groups on the ground that we’re here and ready to collaborate and fill in the gaps before more federal programs or international programs are there,” Leiner says. “Even though there have been bumps in the road, the Administration has been very open and responsive [about their plans] and we’re very grateful for that.” 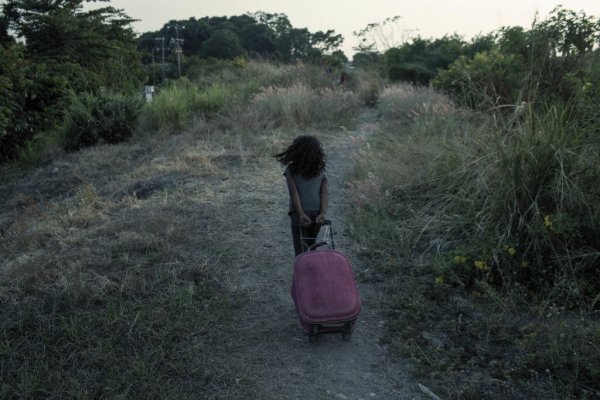 What to Know About Biden's Immigration Executive Orders
Next Up: Editor's Pick