Migrants Stranded in Mexico Have 1 Year to File for Asylum. COVID-19 Is Making That Deadline Nearly Impossible

A sign demarcating the edge of the isolation area at the Matamoros tent encampment for asylum seekers on July 13, 2020.
Lexie Harrison-Cripps/SOPA Images/LightRocket via Getty Images
By Jasmine Aguilera

Prior to the outbreak of COVID-19 in the U.S., Charlene D’Cruz and a group of other volunteer immigration attorneys traveled several days a week across the U.S. Southern border from Brownsville, Texas, to the Mexican city of Matamoros to give advice to some of the thousands of asylum seekers desperately attempting to enter the U.S.

Due to the pandemic, immigration courts shut down and many migrants waiting in Mexico are missing deadlines to apply for asylum. The attorneys, working remotely, are scrambling to submit applications in the hope they will be accepted.

Since the enacting of the Migrant Protections Protocols (MPP) program in January 2019—which requires asylum seekers to wait in Mexico until a judge decides their case—an increasing number of asylum seekers began amassing at major ports of entry spanning the border, including Matamoros. According to the Transactional Records Access Clearinghouse, more than 66,000 people have been placed into the MPP program, and some formed makeshift encampments in front of ports of entry into the U.S. to be close whenever they received an opportunity to see an immigration judge. One of the largest encampments has formed in Matamoros, in front of the international bridge.

D’Cruz and other volunteer attorneys she recruited from across the country regularly met with groups of those waiting at the border, offering advice about how to navigate the complicated U.S. immigration system and trying to get those who were vulnerable into the U.S. immediately.

The situation at the border was already difficult for those waiting, living in the camp sheltering up to 2,000 people or more, including children. While some could secure jobs in Matamoros, others have depended on the food provided by charitable organizations, and can only bathe in makeshift showers.

When COVID-19 began spreading in the U.S., immigration courts shut down, leading to indefinite delays for hearings. Lawyers haven’t been able to travel to Matamoros. They have adjusted to providing legal services remotely from the U.S. with the help of an on-the-ground assistant in Matamoros. But soon a realization emerged: many asylum seekers are on the verge of missing their one-year deadline to submit their applications for asylum.

By law, migrants are expected to apply for asylum within one year of their entry into the U.S. But many asylum seekers stuck in Mexico as part of MPP—also known as the “Remain in Mexico” program—missed that deadline as immigration courts along the border were shut down because of the pandemic. It is unclear, given the extraordinary circumstances of the COVID-19 pandemic, whether the asylum seekers will receive a second chance to apply.

“We don’t know how this is going to play out,” says D’Cruz, director of Project Corazon, a nonprofit that defends the rights of immigrants and their families. In the last couple of weeks, working remotely from Wisconsin, D’Cruz has gone through her database of those she has worked with in Matamoros case-by-case to see who is at risk of missing their deadlines. “There’s so much chaos and everything’s so blurry with MPP, and always has been.”

For those waiting in Matamoros, conditions have worsened and there is a sense of desperation with no date in sight for cases to be heard. “Now people are feeling more forgotten,” Andrea Leiner, director of strategic plans at Global Response Management (GRM), an NGO providing full-time medical assistance at the encampment, tells TIME. “The change in mood is palpable.”

D’Cruz has been spearheading the effort to submit applications on behalf of asylum seekers stuck in Matamoros. She estimates working on 100-200 applications with the help of some assistants, while another immigration attorney, Jodi Goodwin, works on additional applications. It’s a time-consuming process, D’Cruz says, that involves going through each individual’s file one at a time to try and build a case for why that individual qualifies for asylum.

It is impossible to know how many total asylum seekers across the border have missed their one-year deadlines. Before COVID-19, lawyers were already struggling to keep up with the numbers of people arriving at the border hoping to claim asylum. D’Cruz and others assisted several at a time, but when they had to stop providing in-person counsel in Matamoros because of COVID-19, “a lot of people did slip through the cracks,” D’Cruz says.

In a way, D’Cruz and Goodwin say they are operating in the dark without awareness of how the U.S. government will handle cases that have passed the application deadline. They’re erring on the side of caution, unsure whether the work they’re doing will pay off. According to the Illegal Immigration Reform and Immigrant Responsibility Act of 1996, prospective asylum applicants have one year from the day they enter the U.S. to submit an application—but the Act grants that there could be exceptions to that rule due to extraordinary circumstances.

The Department of Justice, which oversees MPP court hearings, did not immediately respond to TIME’s request for comment.

D’Cruz believes COVID-19 could be considered an extraordinary circumstance, but she says the U.S. Department of Justice has so far not provided any guidance.

“For a long time, I think that we didn’t think that it would ever be an issue,” says Goodwin, D’Cruz’s colleague. “Because who in their right mind would have ever thought that people would be stuck in Mexico for a year?”

Safety and health concerns in and around the Matamoros tent encampment have increased urgency to the situation. After many months—and a year for some—of waiting in strenuous conditions, unsure of when MPP cases will be heard again, the hope of ever achieving asylum in the U.S. has started to dwindle.

Living conditions for asylum seekers at the encampment have worsened over the course of the few months of the pandemic. Hurricane Hanna struck the region in late July, causing the river Rio Grande to flood and forcing part of the camp to relocate. The camp has since struggled with vermin and other wild animals encroaching.

“People are just worn down,” says Helen Perry, GRM’s executive director. “They’ve been in these conditions for a long time… people are just trying to find anywhere they can go where they feel safe.”

Asylum seekers living at the encampment have divided their living spaces into sections based on countries of origin, and each section of the camp has its own leader to help coordinate day-to-day care. In late August, the body of a young man was found dead in the Rio Grande River. He was later identified as 20-year-old Edwin Rodrigo Castro de la Parra, an asylum seeker from Guatemala who was a leader at the Guatemalan section of the encampment, according to GRM.

According to GRM and other assistance groups in the region, several people had been found dead in the river over the course of about two weeks, including Castro de la Parra. The identities of the other bodies have not yet been released. It’s not yet known why or how people ended up in the river, but the deaths has only increased fear, trauma and concern for those living at the tent encampment.

“[Castro de la Parra] was a real loss for the entire community,” Leiner says. “It hit everybody really hard, and it was on the tail of the flooding from Hurricane Hanna and the community spread of COVID-19. I think a lot of people are feeling like it’s just one hammer blow after another, and people are starting to lose hope.”

Another concern is fear of cartel violence. Migrants journeying through Mexico to arrive in the U.S. have long been susceptible to violence by cartels, who kidnap and extort those they believe have relatives in the U.S. who can pay a ransom. Sexual assault and robbery are also common.

One bright spot is that COVID-19 has so far not been as severe at the encampment as feared, Leiner says. Of the five people who have been diagnosed with the virus, one was hospitalized but fully recovered. The others only experienced mild symptoms. An additional 79 people have tested positive for antibodies.

Meanwhile, the population of the camp has decreased, something Leiner says has pros and cons. While its initial population was estimated to hover between 1,500 to 2,000 people, GRM believes the current population is down to about 1,000. Many of those waiting for their cases to be heard have moved into other accommodation or shelters in the city, away from some of the resources that could be provided by the encampment, including medical care.

“For one thing, getting people out of the elements and into structures definitely protects them a little bit more, that is a good thing” she says. “However, as people are assimilated into the larger population of Matamoros, it’s easier for them to be forgotten. Everybody being in one camp is something that can’t be ignored…It’s a daily reminder that we have an untenable situation that needs to be dealt with.”

Andrea Rudnik, co-founder of Team Brownsville, a nonprofit that has been providing food at the tent encampment for months, including during the pandemic, says the hardest part is knowing that NGOs can’t fulfill the asylum seekers’ most essential need—safety in the U.S.

“That’s what they want more than anything. More than food, more than shelter,” Rudnik says. “It just is not that simple.” 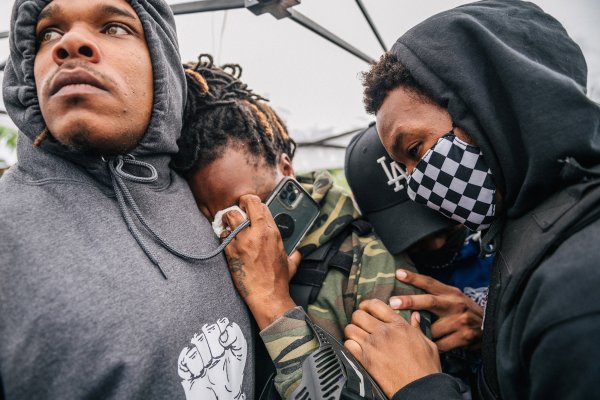 Grand Jury Brings No Charges Over Breonna Taylor’s Death
Next Up: Editor's Pick