Kevin McCarthy, the House Republican minority leader, is trying to have it both ways. The question for him and Republicans everywhere is: can he?

The Republican party is at a crossroads, and the diverging paths forward are clear: one follows former President Donald Trump’s politics, and the other tries to move past him. By virtue of his high-profile position, McCarthy, whether he wants to or not, will play a decisive role in choosing which route the party goes in the post-Trump era.

This week McCarthy is facing the personification of this problem in Rep. Marjorie Taylor Greene, the freshman lawmaker who has come to symbolize the fringiest corners of the GOP, and who has not dabbled but plunged into conspiracy theories and the deepest trenches of Trumpism. McCarthy has refused to take decisive action to discipline Greene and signal what is and isn’t acceptable in Republican politics. Instead, accountability has fallen to Democrats, who on Thursday put a resolution on the House floor that removed Greene from her congressional committees and put Republican lawmakers on the record over whether they support her. It passed by a vote of 230-199, with 11 Republicans joining Democrats on the vote.

Simultaneously, McCarthy defended Committee Chair Liz Cheney, who came under fire from some House Republicans after voting to impeach Trump for inciting an insurrection in January. “This Republican Party’s a very big tent, everyone’s invited in,” McCarthy said Wednesday night, following a closed-door conference meeting at which Greene addressed her Republican colleagues and reportedly received a standing ovation from some members. At the same meeting, Cheney handily beat back a challenge to her leadership spot over her impeachment vote.

McCarthy’s choice to be a backseat passenger in the intensifying debate over the soul of the Republican Party—rather than the one steering the conversation—may well leave him liable for what the GOP could become. “I think Mr. McCarthy is like an acrobat on a high wire, and if he leans too far to either direction, he’s in peril,” says Michael Steel, a Republican strategist and former aide to former Speaker John Boehner. “This is going to require an active political skill akin to Jean-Claude Van Damme straddling two trucks in the Volvo ad.”

McCarthy’s been in politics long enough to know to always keep an eye on the next election. With Democrats defending a fragile majority, Republicans are bullish about their chances of taking back the House in 2022. He’s arguably never been in a more powerful —or vulnerable — position in his party than he is today. “He wants to be speaker,” says Dan Eberhart, a Phoenix-based GOP donor with plans to contribute to the National Republican Congressional Committee, in a text message. “He needs the Trumpists on board.”

On Wednesday afternoon as the House Republican conference met in-person, McCarthy released a statement that condemned Greene. “Past comments from and endorsed by Marjorie Taylor Greene on school shootings, political violence, and anti-Semitic conspiracy theories do not represent the values or beliefs of the House Republican Conference. I condemn those comments unequivocally,” McCarthy said in his statement.

A short list of Greene’s transgressions includes: indicating support on social media for the execution of high-profile Democrats, as reported by CNN; suggesting on Facebook that school shootings were planned events to advance Democrats’ agenda, as reported by Media Matters; and casting doubt on whether a plane flew into the Pentagon on 9/11, as reported by the New York Times.

Republicans argue that since many of the statements in question were made before Greene was a member of the House, the situation is different than holding a member accountable for actions they had taken after being elected. Democrats argue Greene’s record is so startling the situation is unlike any other before it.

The proposal didn’t fly with Democrats, who had lined up the resolution that would remove her from her committee assignments if Republicans didn’t hold her accountable themselves. Democrats said they hoped to avoid moving on it, giving Republicans the space to discipline their own members. When it became clear there was no agreement, Democrats announced they would put the resolution to a floor vote. They wasted no time tying McCarthy himself to Q-Anon for his failure to act. “McCarthy (Q-CA) Fails to Lead, Hands Keys to Party to Greene,” said one press release from the office of Speaker Nancy Pelosi.

Republicans left the Wednesday meeting, which lasted four hours, touting their unity. But the fissures within the conference are striking given that it’s traditionally easier to keep the party in the minority united, since all they have to do is oppose the party in power.

“It’s not a simple choice. It’s a complicated thing. It’s a complicated party and we have to figure out how we’re going to deal with each other,” responded Rep. Patrick McHenry of North Carolina, a senior member of the Republican conference, when a reporter asked if the future of the party was Cheney or Greene during a break the conference took to vote. Asked if this was a test of leadership for McCarthy, McHenry said, “Yes, it is.” Asked to expand, he shrugged.

Across the Capitol, Senator Mitch McConnell, the top Republican, took the rare step of issuing a rebuke of Greene. “Loony lies and conspiracy theories are cancer for the Republican Party and our country,” McConnell said in a statement Monday night. “Somebody who’s suggested that perhaps no airplane hit the Pentagon on 9/11, that horrifying school shootings were pre-staged, and that the Clintons crashed JFK Jr.’s airplane is not living in reality.” Other high-profile GOP voices like Senator Mitt Romney also sounded notes of alarm. “I think we should have nothing to do with Marjorie Taylor Greene, and think we should repudiate the things she said and move away from her.”

Meanwhile, Greene, who spoke one-on-one with McCarthy on Tuesday and said she spoke with Trump by phone on January 30, also fundraised off of Democrats “trying to expel me from Congress.” On Wednesday after the meeting, she tweeted she had received more than 13,000 donations. Ahead of the vote on Thursday, Greene gave floor remarks in which she equated the press with Q-Anon and though she expressed regret for past statements, she did not apologize. “There were words of the past, and these things do not represent me, they do not represent my district, and they do not represent my values,” Greene said.

Influential conservative voices from outside the conference have also started to weigh in on Greene, including the Republican Jewish Coalition which put out a statement condemning her. On Thursday morning, Matt Brooks, the group’s executive director, was complimentary of the way McCarthy handled the situation. “From (McCarthy’s) perspective, yesterday was the best possible outcome,” Brooks says. “The way it played out, [he] was able to hold and keep the fault lines and the fissures within the Republican conference from splintering the group.”

It’s unclear how long McCarthy can manage to keep the party moving forward on the dual tracks that have clearly emerged. Rep. Jaime Herrera Beutler of Washington, who like Cheney voted to impeach Trump, was asked on her way into the Wednesday’s meeting whether McCarthy had a responsibility to defend his fellow leader. “I think leaders have a responsibility to lead,” she said. “We’ll see if they do.” Which way McCarthy will ultimately lean remains to be seen. 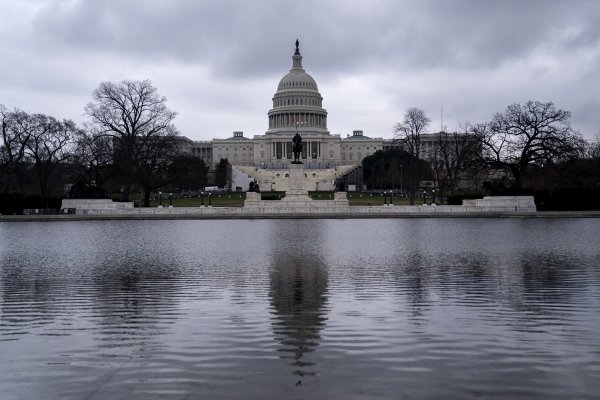 Why Senate Democrats Will Still Be Stymied
Next Up: Editor's Pick