Liz Cheney Voted to Impeach Trump. Now She's Under Pressure from Her Own Party

The fight for the future of the Republican party in the post-Trump era has arrived, and one of the earliest proxy battles is playing out in the House of Representatives’ Republican conference.

Chair Liz Cheney, the third-ranking Republican in the House, is facing pressure from some members of the conference following her vote to impeach now-former President Donald Trump earlier this month for incitement of insurrection. Though it was the most bipartisan impeachment of a President ever, there were still only a handful of Republicans who voted across party lines with Democrats for impeachment. Cheney was the member with the highest name recognition, and it has earned her the ire of some Trump faithfuls, who are now circulating a petition and calling for the Wyoming lawmaker to resign from her spot in leadership.

Rep. Matt Rosendale, a freshman from Montana and one of the lawmakers taking the lead in the effort, won’t say how many lawmakers have signed on to the petition so far. His office says the timing is still “up in the air in” on when he will submit the resolution.

In the meantime, the conference is brimming with drama, with battle lines forming between those who would rather forget Trump ever led their party, and those who think his brand of politics is its future.

“This is basically a right-wing version of cancel culture,” says Rep. Adam Kinzinger of Illinois, a Trump critic and one of the 10 Republicans to vote in favor of impeachment. ‘”If you don’t like Donald Trump, and you vote against Donald Trump, we’re going to cancel you. We’re going to say that you don’t have a place in this party’…It’s no different.”

House Republican leadership did not whip members to vote either way on impeachment, leaving lawmakers to come to their own decision about whether the President incited a pro-Trump to attack the U.S. Capitol on January 6.

A day before the vote, Cheney put out a statement announcing she planned to vote against Trump. “None of this would have happened without the President. The President could have immediately and forcefully intervened to stop the violence. He did not. There has never been a greater betrayal by a President of the United States of his office and his oath to the Constitution,” Cheney said in the statement. “I will vote to impeach the President.”

The resolution text that Rosendale’s office referred TIME to argues that Democrats had used Cheney’s position “as justification for a truncated impeachment process.” It also notes that her position was out of line with most of the conference.

Many Republican lawmakers have been quick to fall on either side of the internal debate, with some coming to Cheney’s defense despite having themselves voted against impeachment. “I don’t think they ought to be punished for voicing their opinion or casting their vote, particularly when people were told ahead of time this is a vote of conscience,” says Rep. Tom Cole, a senior member from Oklahoma. “They’re having to explain this back home to their own electors. I don’t think we need to pile on to add additional penalties in Washington, DC.”

While other Republican leaders have also expressed support for Cheney, some of it has been tepid at best. A spokesperson for Leader Kevin McCarthy said in an email to TIME that he “does not support efforts to remove Cheney as conference chair.” But in an interview on Gray Television’s Full Court Press with Greta Van Susteren, McCarthy said he thought she had to answer the conference’s questions and registered concern that he hadn’t been told of her decision ahead of time.

“Clearly you’ve heard some of our members who want to remove her. I’m not in that camp, Whip Steve Scalise said in a Fox News appearance. “This is an internal discussion that we’re having and that we’re going to work through.”

Cheney’s office declined an interview request for this article, but in a Fox News appearance on January 21, she said her vote came from a belief that her obligation was to the Constitution and to do what was right transcended politics. “We have differences of opinion about a whole range of issues, including about this one. I anticipate and am confident we will be united as a conference going forward,” Cheney said.

The fallout hasn’t been contained to Washington. Back home in Wyoming, one high-profile challenger, Anthony Bouchard, a state senator, has already come forward to say he will primary Cheney next year. And one of Trump’s biggest defenders in the House, Florida Rep. Matt Gaetz, traveled to the Wyoming state Capitol, where he held a rally on Thursday targeting Cheney. “Turn down for wut? #RemoveCheney,” Gaetz tweeted afterwards.

But there are prominent Republicans from Cheney’s home state who have voiced their support for her as well. “The House is going to make their own leadership decisions, but I support Liz Cheney,” says Wyoming Senator John Barrasso.

As much as the two chambers of Congress like to think of themselves as different bodies with different considerations, perhaps the biggest short-term takeaway from the still-unfolding drama is the warning House Republicans are sending to Republicans in the Senate, which will next month begin the second impeachment trial of Donald Trump. Asked if he worried about the message the House was sending to Republican Senators who might vote to convict Trump, Barrasso said Senators would vote based on their own interpretation of the Constitution.

“I don’t see any correlation,” he says. 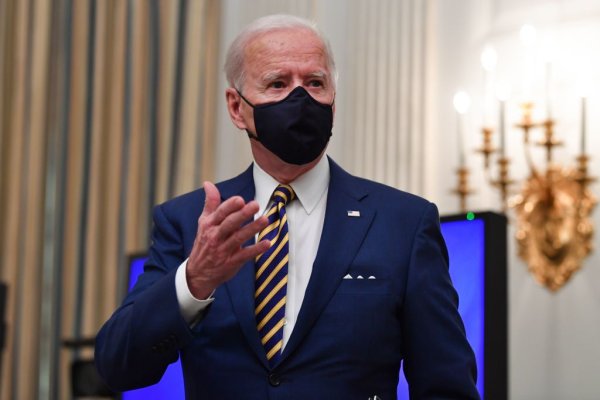 Biden's Call For Unity Is Running Into Deadline Pressure
Next Up: Editor's Pick