In this underwater photo taken October 23, 2020 a school of fish swim over corals in Alhambra Rock, a popular diving area in the Gulf of Thailand, off Rayong province.
Romeo Gacad—AFP via Getty Images
By Aryn Baker

The ocean soundtrack of the popular imagination is a largely silent one, interrupted only by the mournful aria of migrating whales or the acapella vocalizations of dolphin pods.

In fact, the underwater realm sounds more like an orchestra warming up, the cetaceans hitting their high notes while other marine mammals clear their throats against a background of breaking waves. A distant downpour sends out a staccato riff that can be heard for miles, even as fish and marine invertebrates snap out a syncopated rhythm designed to scare off predators or attract mates. It is a cacophonous soundscape that had changed little in tens of thousands of years. Until, that is, modern humans brought their leaf blowers to the concert hall.

Over the past couple of hundred years, humans have progressively altered the ocean soundtrack with the introduction of shipping, industrial fishing, coastal construction, oil drilling, seismic surveys, warfare, sea-bed mining and sonar-based navigation. Until recently, underwater sound pollution had not attracted the same attention as its terrestrial equivalent. Now, a new paper published in the journal Science titled “Soundscape of the Anthropocene Ocean” lays out the repercussions, demonstrating that noise pollution can be just as harmful to the ocean environment as other kinds of pollution.

But unlike plastic pollution or fertilizer runoff, remedies are easy to find and the damage can be reversed. “We are hoping that this report will not only reveal elements of how humans impact the ocean through sound pollution, but that it will also bring the topic to the attention of policymakers who will be able to act based upon the very real solutions that we have at our disposal,” says lead author Carlos M. Duarte, distinguished professor at Saudi Arabia’s King Abdullah University of Science and Technology (KAUST).

Marine ecologist Kirsten Thompson of the United Kingdom’s University of Exeter, who was not involved in the study, said the report could not have come at a better time. “It succinctly summarizes the fact that we are in this new phase of anthropogenic noise in our oceans that is having a dramatic impact on different species.” Most significant, she notes, is the fact that the paper “doesn’t just point at the problem, it shows how to solve it.”

Duarte’s team of global researchers combed through more than 10,000 scientific papers on the subject of marine sound and its impact on wildlife and found overwhelming evidence that anthropogenic, or human-caused, noise negatively impacted marine fauna and their ecosystems, disrupting their behavior, physiology, reproduction and, in extreme cases, causing mortality. Sound, the authors noted, is the sensory cue that travels farthest through the ocean and is used by marine animals, from invertebrates to great whales, to interpret and explore the marine environment around them. “This makes the ocean soundscape one of the most important, and perhaps under-appreciated, aspects of the marine environment,” the report notes.

When talking about soundscapes, print articles can only do so much to illustrate the issue. One of the paper’s co-authors, multimedia artist Jana Winderen, contributed an audio track of the ocean soundscape, shifting from the sounds of a healthy ocean to the human-caused cacophony that defines much of the marine soundscape today.

According to the article, which was published on Feb. 4, shipping alone has contributed an estimated 32-fold increase of low-frequency noise along major shipping routes in the past 50 years, driving marine animals away from vital breeding and feeding grounds. But even terrestrial traffic, on structures like bridges or at coastal airports, can produce low-level, continuous noise that can penetrate underwater. Dredging technology that is used to deepen ports and harvest minerals from the seafloor also generates low-frequency noise that travels far distances.

Dynamite fishing, designed to stun or kill reef fish for easy collection, remains a major source of blasting noise in Southeast Asia and coastal Africa, the report notes, while in the North Sea, “the controlled detonation of bombs dropped on the seafloor during World War II continues, more than 70 years later, to be a major source of disruptive and destructive sound.” Underwater oil and gas drilling is an obvious source of noise, but so too are the seismic surveys used to locate new fields, which utilize a kind of sonic cannon to pound the sea floor with enough force to vibrate three miles deep. The sources of human-produced noise are endless, says Duarte.

Even ostensibly climate-friendly activities, such as constructing offshore wind farms, can substantially increase local sound levels (though the sound of the turbines themselves tends to attenuate within a few hundred meters). Cumulatively, the report notes, human-produced noise can mask “environmental cues indicating the presence of prey and predators, resulting in loss of social cohesion, missed opportunities for feeding, or failure to avoid a predator.” In other words, it’s so loud down there that fish can’t even hear themselves think, let alone get a meal, find a date, or dodge the dinner plate.

Read more: Inside a Michelin-Starred Chef’s Revolutionary Quest to Harvest Rice From the Sea

The immediate response, says Duarte, is that marine animals leave noisy areas. But quieter areas are increasingly rare. “What this does is further shrink their habitat. They are actually going away from food sources and breeding grounds. Their population becomes smaller and that undermines our conservation efforts, and overall levels of ocean biodiversity.”

Even the Arctic, icebound and off limits to most human activity, is no longer a refuge. Global warming has triggered the greatest loss of ice in recent history, opening up the polar region to increased shipping traffic and mining exploration, bringing new levels of noise to an environment that used to be acoustically pristine.

Human-generated sound may seem like just one more weight placed on an ocean already burdened by overfishing, plastic pollution, agricultural runoff, acidification and warming — but it is also the one that is easiest to lift, says Duarte. “Unlike all of the other stressors, like warming or chemical pollution that will take years to fix, the moment we switch our noise off the impact disappears.” Rebound and recovery would be nearly instantaneous, he says, pointing to marine life surveys conducted around April 5, 2020, when 60% of the world’s population was under some form of lockdown. Ocean noise, he says, went down by 20%. “We started seeing marine life return to once-busy waterways where they had not been seen before. That 20% was enough for a remarkable, almost instantaneous response of large marine animals coming closer to shore and claiming back their ancestral territory.”

The final section of the report explores technical advances in many aspects of marine transport and construction that could be easily used to turn down the volume. From wind-powered ships to noise-reducing propellors, floating wind turbines and “bubble curtains” that muffle construction noise, the solutions are already available and in some cases, cost effective. What is needed, says Duarte, is better regulation. “There needs to be a policy that mandates acoustic mitigation in the marine environment. We have noise standards for cars and trucks, why should we not have them for ships?”

Of all the ocean stressors, noise pollution is the “low hanging fruit,” says Duarte. Reduce the noise, and marine life will be able to better withstand everything else. It’s kind of like putting on a pair of noise-cancelling headphones on an airplane. You don’t realize how much the engine bothers you until it goes away. “By cutting down anthropogenic sound, we can help marine life better resist the other pressures that humans place, but that are harder for us to tackle.” 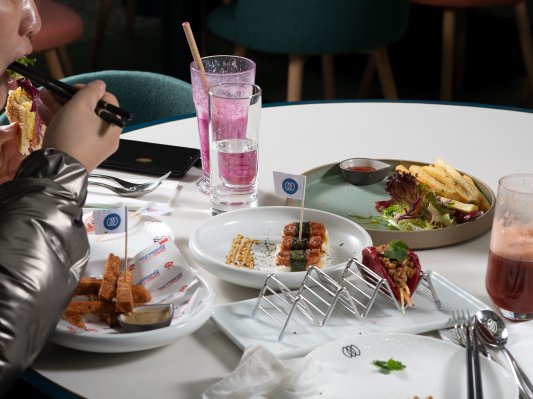 How China Could Change the World By Taking Meat Off the Menu
Next Up: Editor's Pick