'Would You Kill God Too?' W.J. Lofton's New Poem, Commissioned by Ava DuVernay, Puts a Spotlight on Breonna Taylor’s Killers

Filmmaker Ava DuVernay counts herself as one of the many people inspired by W.J. Lofton’s powerful visual poem “We Ask For Fire”—in which he repeats the words, “the cops who murdered Breonna Taylor are at home with their families”—as protesters around the world demanded justice following her death last March.

“I was deeply moved,” DuVernay tells TIME. “The idea that one artist was able to unite a very striking written voice with a visual voice—a marriage of the vocabulary it takes to be potent in both forms—was very interesting to me.”

DuVernay has now commissioned Lofton, 28, to create another visual poem for her Law Enforcement Accountability Project (LEAP), which she started in the days after George Floyd’s murder last May in Minneapolis, and aims to call attention to police brutality as well as the code of silence that exists around it. The resulting work, “Would You Kill God Too?,” debuts Sunday. In the poem, Lofton asks a series of questions to three Louisville Metro Police Department (LMPD) officers—Jonathan Mattingly, Brett Hankison and Myles Cosgrove—who conducted a “no knock” warrant raid on Taylor’s apartment late at night on March 13, 2020. During the raid, the officers fired more than thirty shots into her residence, killing her.

“How do you explain this to your children?” he asks the officers. “Did you tell them the blood on your shoes belonged to a Black girl, or is she not worth mentioning?… God was in the room when you made a massacre out of someone’s child.”

“I wanted to confront them like they confronted Breonna,” Lofton says. “It’s so important to constantly name the officers, so they don’t get to go back and just live their lives after they’ve taken someone’s life.”

(It is exceedingly rare for officers who have killed Black civilians to be charged; of the three officers, only Hankison has been charged—for “wanton endangerment,” for firing into Taylor’s neighbor’s apartment.)

“Once they kill Black people, do we just accept that they disappear behind a blue shield?” DuVernay asks. “As an artist, I have no domain on how to fight that other than to tell people in this country that we don’t have to let these officers walk away.”

Read more: Racial-Justice Organizers are TIME’s Guardians of the Year

LEAP is a two-year initiative that aims to raise awareness and put pressure on law enforcement through a series of creative works spanning film, theater, photography, poetry, music, sculpture and dance. (Inaugural funders included the Ford Foundation and Ryan Murphy.) Lofton’s piece is the second to be released. DuVernay says that a central challenge of the project has been realigning artists’ creative focus from the victim to the officers. “It’s the opposite of what our culture has trained us to do: It’s okay to say the victim’s name, but we’ve been asked to turn our back on the law enforcement side,” she notes. “We have to think about these cases differently.”

Lofton began writing the poem last September, turning to the music of Nina Simone and the art of Carrie Mae Weems for inspiration. “A life was snuffed out, and having to revisit this every day, having to carry this in my body and feel the weight of it—it was very emotionally difficult,” Lofton says.

After finishing the poem, Lofton then filmed visual accompaniments in Atlanta, where he lives, capturing images of Black love as well as tragedy. Visual references include a hoodie that quotes Sojourner Truth’s “Ain’t I A Woman” speech and a confederate flag. “ I wanted to put historical reminders throughout the film that challenge this idea we live in a post-racial society,” he says.

DuVernay hopes to put out a new LEAP piece every month. “We have the funds to identify artists who want to get into the dirt with us and make art that stands in contrast to the standard narrative around police killing Black folk,” she says. 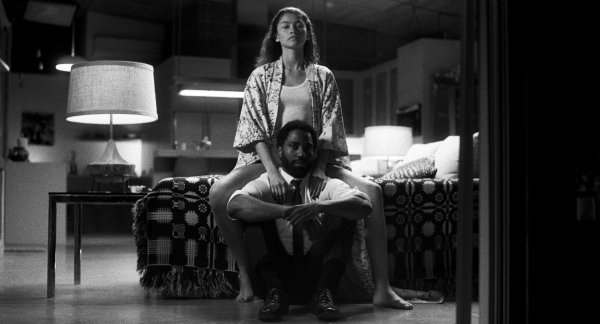 Here's Everything New on Netflix in February 2021—And What's Leaving
Next Up: Editor's Pick