A Siena Farms employee tends to the cherry tomatoes inside the greenhouse in Sudbury, Mass. on May 13, 2020.
Jessica Rinaldi—The Boston Globe/Getty Images
Ideas
By Tom Colicchio and Pierre Ferrari
Tom Colicchio is the founder of Crafted Hospitality
Pierre Ferrari is the president and CEO of Heifer International

Throughout the pandemic we’ve heard the same rallying cry – let’s not return to what we did before but use this as a moment for thoughtful, strategic change. The food system must be approached in the same way. With the public health crisis making Americans increasingly aware of where their food comes from, business as usual is simply not an option. President Biden’s nominee for Agriculture Secretary Tom Vilsack served in this role under President Obama and is credited with expanding access to resources for underserved farmers, but systematically changing the system to benefit those farmers will take strong political will. COVID-19 has shown that shorter supply chains and local production are key to a more resilient food system, and he now has an opportunity to proactively shift power to local, small-scale farmers who will best serve their communities.

The idea of a food system designed to prevent hunger and promote healthy food should not be novel. However, since the 1970s the U.S. food system has been hyper-focused on scaling up agricultural production over sustainably producing diverse, nutritious, local food. Today, the overwhelming majority of farms in this country produce just two crops – corn and soybeans – the four largest beef packers control 80% of the market and only 13 slaughterhouses process the majority of all beef consumed in the U.S. Rather than amend or add to what currently exists, the new Administration and the USDA need to design programs and policies based on what is best for local farmers and food systems.

Currently, there is a two-tracked food distribution system in this country for the majority of food products: one being restaurants and the other supermarkets. At the start of the pandemic, restaurants nationwide were forced to shut down, some permanently. At the same time, the virus ran wild in industrial meat-processing plants. Both caused the food supply chains farmers relied on to break. Meanwhile thousands of newly unemployed Americans, including those from the upended food and farming sectors, were forced to join record food bank lines. In stark contrast to our idealized image of the small family farmer and Americana, the pandemic has revealed hunger and poverty among farmers, farm and food industry workers.

Read more: ‘They’re Trying to Wipe Us Off the Map.’ Small American Farmers Are Nearing Extinction

Although disruptions in supermarkets were temporary, a system celebrated for its strength has been shown to be alarmingly fragile, failing the very people who fuel it. Farmers saw clearly how inherently dependent they are on other people. Consumer demand had not disappeared–grocery store shelves emptied—but drivers were not picking up food, line workers had been let go from infected plants and restaurateurs lost their restaurants. Without these middlemen, demand was insufficient, and for many farmers with animals and crops that grow regardless of the pandemic, cutting them out was the only solution. Stories emerged of farmers forced to euthanize their animals, dump milk and leave vegetables to rot.

Some farmers and small food producers have been able to switch to e-commerce, engaging in cooperatives in which they can have an equity stake and bypass traditional supply chains. Others managed to find local butchers or smaller plants, and some sold directly to food banks. Those who could shorten their supply chains and turn to local resources survived, and local food systems thrived.

Individuals have also stepped in where the government has failed to do so. Donations to nonprofits are increasing, while farmer delivery services are seeing record sales. The accomplishments of anti-hunger organizations and community-led fresh food initiatives like farmers cooperatives and farm-to-table restaurants are important and impressive. But there is reason to speculate about whether we are working against ourselves. When the government believes charities or others have solved a problem, it sees an opportunity to save money rather than fund the solution. If people step up, our government needs to step up too – not in addition to, but first.

Read more: Families Strained by the Pandemic Are Turning to Food Banks Struggling to Keep Up

Currently farmers have very few choices for distributing and selling their products, forced to go through channels that are heavily regulated and restricted by the USDA. Small-scale sustainable livestock producers are left with few alternatives. “The biggest problem is that there is no representation from small-scale processors,” said Andy Shaw, owner of Cypress Valley Meat Company, a sustainable small-scale processor in Arkansas. “The people in the room are from industrial agriculture so of course the policies they are influencing reflect their interests.”

One of us has decades of experience in the food industry and now runs an international anti-hunger organization working directly with small-scale farmers in the U.S. and around the world. The other is a world-renowned chef responsible for the livelihoods of hundreds of restaurant workers and influencing the food knowledge, beliefs and choices of millions of consumers.

We understand the complexities of supply chains and markets as well as how the food system directly impacts individuals. We both agree that what we have done in this country is quite remarkable. We have a food system that delivers, produces and feeds hundreds of millions of people two to three meals every day. The sheer scale is amazing.

But it’s also a failure. The irony of America’s trillion-dollar industrial food system is that millions of people still go hungry every day. According to a Brookings Institute analysis from last year, “13.9 million children lived in a household characterized by child food insecurity in the third week in June, 5.6 times as many as in all of 2018 (2.5 million) and 2.7 times as many than did at the peak of the Great Recession in 2008 (5.1 million).” Yet, it would only cost $25 billion to end hunger in this country.

In responding to COVID-19, we have an opportunity to finally address the root cause of the problem. The incoming Administration has a responsibility to drive systemic change on hunger and nutrition, and that starts with the food system. As conversations continue in the halls of Congress as to how best to kickstart our economy, we have to make sure local farmers are here for the long-term, as part of a healthy and diverse food and farming system.

People want to be able to feed their families with safe, healthy, nutritious food, and they need to be able to afford to do so. We can end hunger in America. We just haven’t had the political will to do it. 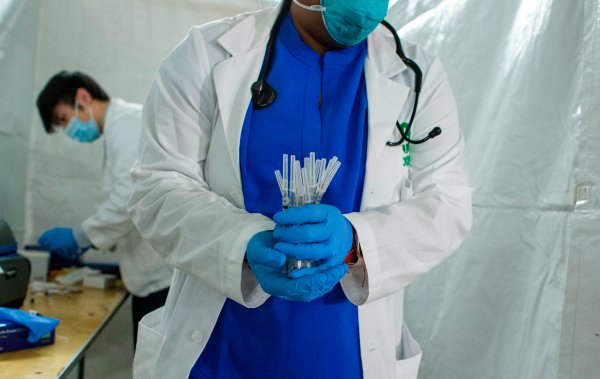 Many States Don't Know Who They're Vaccinating
Next Up: Editor's Pick